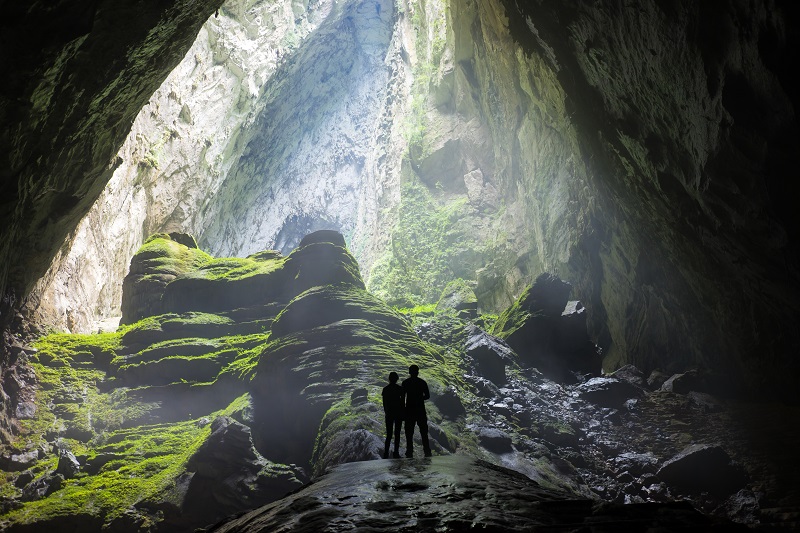 Vietnam is home to a huge variety of sights to see, new and old experiences to witness and exciting activities to take part in. With an exponentially growing number of tourists visiting the nation every year, Vietnam’s legendary appeal is becoming renowned worldwide. This growth brings out the best of Vietnam’s past, and generates countless new activities and places to visit, as well! For several years now, and with many more to come, Vietnam has remained to be my chosen place of residence. The exact reasons for why I’ve decided to stick around for so long are unknown to me, all I can say, is that Vietnam continues to surprise me day by day with its charming sights, sounds and tastes. The deep sense of cultural unity, the immaculate selection of tasty foods, the vigorously spirited people, a vast amount of history and entertaining folklore, boundless natural phenomena, these are just a few of the things that keep me in love with this stunningly vivacious land, that I’m more than happy to call my home. I feel that truly discovering the depths of Vietnam’s many crooks and crannies would take me multiple lifetimes, but here are a few examples of some of the features that have kept me in love with this beautiful nation for so long. There are literally thousands of reasons to visit, but here are 8 differing reasons for why you should go! 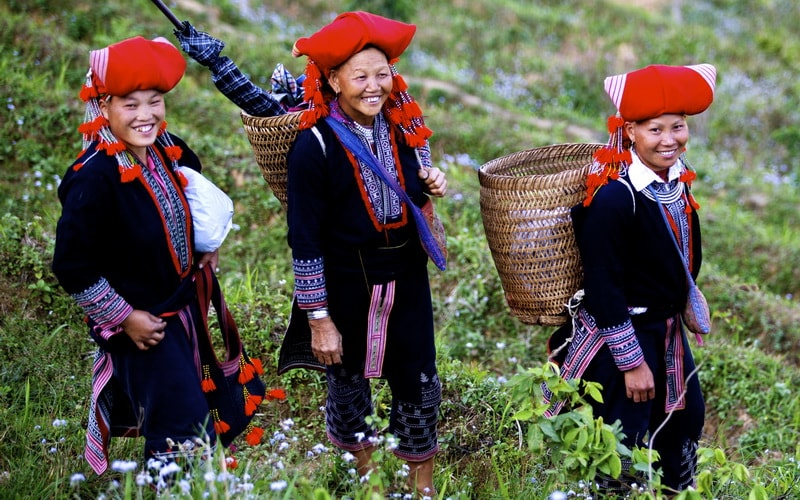 Vietnam is home to over fifty distinct ethnic minority groups. Each minority group comprises of their own unique heritage, culture and even language(s). The largest ethnic minority group, to which most Vietnamese people today are part of, are the Kinh, also known as the Viet. Other, far smaller populations of Tay, H’mong, Dao, Muong, Cham and Khmer Krom (this list could go on and on…) are scattered amongst the many different grasslands and forested valleys, shorelines and mountainous shelves across the nation. The indigenous people of the Southern Highlands in Vietnam are collectively known as the Tay Nguyen people, or Degar, or Montagnard- “people of the mountain”. Individual tribes or minority groups here are renowned for their vibrant and colourful cultural attire, which they wear on a day-to-day basis, distinguishing themselves from other types of indigenous peoples. Similar to that of the Degar people, and many other minority communities, the indigenous H’mong comprise of various sub-cultural divisions, such as the White and Green H’mong, with slight differences in their written and spoken language, as well as their cultural practices and attire. The H’mong are renowned for their nifty sagaciousness and can be easily recognised by their unique cultural headdress. Most ethnic minority groups have their own variations of such cultural headdresses, such as that of the Kinh, the Lo Lo and the Pu Peo people. 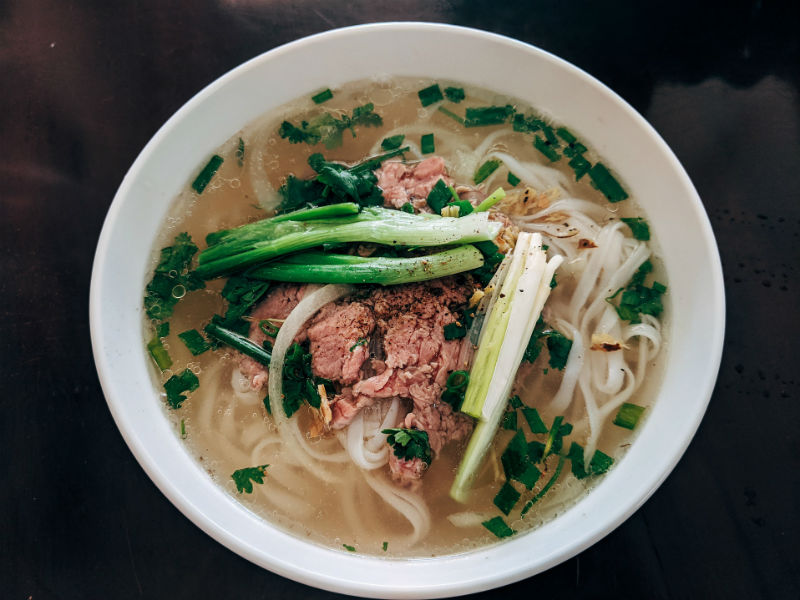 Vietnamese cuisine can now be found across the globe among the international food scene with its signature national dish; the Pho noodle soup. Most meals are harmonized by using a mixture of the five fundamental tastes; sweet, bitter, salty, sour, and umami. One or more of these fundamental tastes are illustrated by each individual dish. Typical Vietnamese cuisine is often graciously concocted using locally sourced fresh herbs and spices, meats and vegetables, making it fundamentally impossible to find authentic cuisine outside the region that it originates from. Common underlying ingredients in Vietnamese cuisine entail different sub-species of mint, coriander, ginger, lemongrass, Thai basil, cinnamon, lime and sometimes chili. Condiments often found accompanying your main dishes include shrimp paste, fish sauce, soy sauce, different types of rice, fresh herbs, fruits, and vegetables. Not only is Vietnamese food renowned for being super delicious, but it’s also generally incredibly healthy for you. Typical local dishes are often not cooked with much oil, are low in fat, are dairy and gluten-free and due to the vast variety of ingredients used; are often full of important vitamins and minerals.

3. The Largest Cave in the World - (Cave of the Mountain River)

A mist-enshrouded entrance to Hang Son Doong; the largest cave in the world

If Vietnam doesn’t seem to have enough over ground activity to pique your interests, then take a look into these subterranean cavernous systems. The largest cave in the world, Hang Son Doong, was discovered by local residents of a nearby village in 1991, though it remained unexplored until 2009, when a team of British cavers managed to finally descend into it. The team fully explored the length of the cave by 2010, having been prevented from doing so by an impenetrable 60-metre (200ft) wall within the cave the year before (coined as the Great Wall of Vietnam). Hang Son Doong is situated in the Phong Nha - Ke Bang National Park which resides in the Annamite Mountains. In addition to housing the largest cave in the world, there are over 150 additional caves within the National Park area, many of which have yet to be explored. Hang Son Doong was shaped by massive volumes of water gradually flowing through a narrow fault line, over a period of 2- 5 million years. The largest cave in the world consists of two large dolines (or sinkholes); the first is called “Watch Out for Dinosaurs”, and the second “Garden of Edam”. At the point of the second doline, visitors can admire the rare phenomena of extraordinarily large cave pearls, having accumulated over countless millennia. The largest stalagmite in the world can also be found here, towering at over 70-meters (over 230 ft).

4. The Craziness of HCMC and Hanoi

Gleaming lights scattered across the horizon, countless motorbikes zooming around, 7.5 million people and more than enough to see and do to appease the senses, this is Hanoi

The seemingly chaotic hurry and scurry, sights and sounds, and not to mention the different scents and flavors found within the two major cities of Ho Chi Minh and Hanoi are indescribable. A huge variety of lifestyles, cuisine, culture, art and motorbikes swerve interchangeably through intricate concrete alleyways and broad high streets interwoven beneath their surrounding towering buildings. Besides their geographic locations (Hanoi is in the north of Vietnam, Ho Chi Minh City is in the south), each city is unique in its norms, places to see and things to do.

5. Tailoring in Hoi An 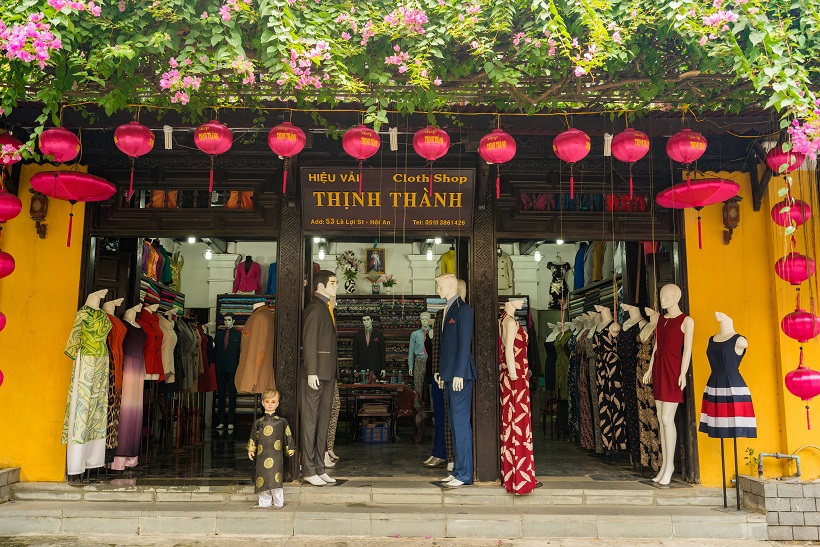 A quaint tailor's shop in Hoi An

The ancient port city of Hoi An has become an increasingly popular tourist destination for its chic ancient town filled to the brim with history and picturesque architecture, its surrounding beaches and its vibrant local fishing culture. The city itself is renowned for being a hotbed for retail and world-class tailors, just search “tailoring capital of the world” on Google, and see what pops up! Having a suit, or other clothing custom-made in Hoi An is an excellent choice of souvenir and a great way to treat yourself. If you’re wondering what your options might be, tailors here are able to create anything your thoughts might desire, ranging from all types of dresses to casual wear such as pajamas, as well as shoes and everything else in-between! Choose from a huge variety of often family-run tailors, though it is recommended that you select an established tailor since the popularity of tailoring in Hoi An has to lead to the rise of many second-rate traders who produce inferior quality attire. 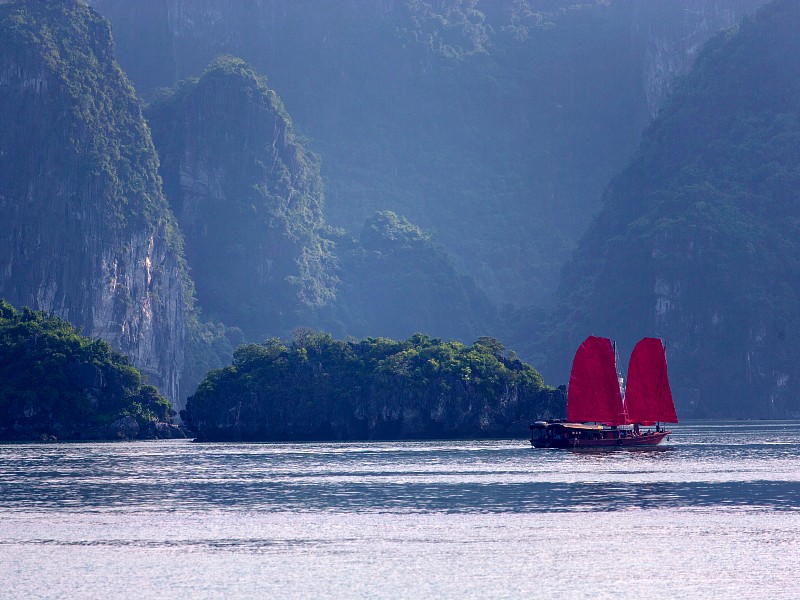 A world-famous UNESCO World Heritage Site in the north of Vietnam situated in the province of Quang Ninh, roughly a two-hour drive away from Hanoi. The name Ha Long actually means “descending dragon”, which derives from a national epic in which enemies attacking from the north are countered by the Mother Dragon and her children whom had been sent to protect the Vietnamese people. In doing so, the dragon gods vanquished enemy fleets as they arrived by breathing divine fire upon them and hurling giant emeralds down from the skies. As the giant emeralds lay scattered around the bay, they formed an enormous defensive wall, preventing any enemies from further attacking from the north. Over time, these emeralds turned to stone and became towering karsts and islets, still piercing the calm waters of the bay today. Classified as being one of the new Seven Wonders of the World, Ha Long Bay (Halong Bay) comprises of thousands of limestone karsts and islets, appearing in many shapes and sizes. A variety of endemic flora and fauna can be spotted here, including monkeys, antelopes, a lot of marine wildlife, and some rare species of flowers. Spend a few nights on the bay and stay overnight on a local “junk”, or passenger boat, by which you will be ferried around to become spellbound by the bay’s natural landscapes. Get yourself out amongst these stunning limestone rock formations and visit hidden caves, coves, beaches and more!

Our suggested tour: Taste of Vietnam

7. The Rice Terraces of the North 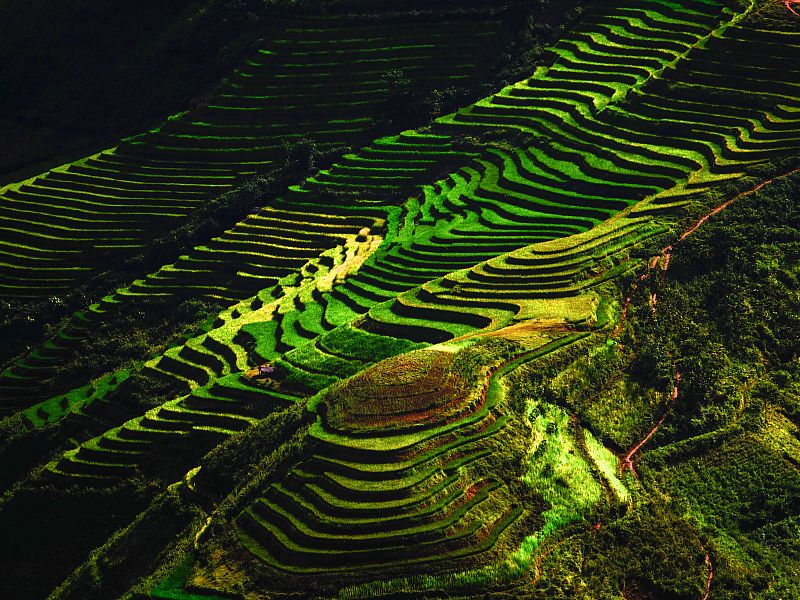 Enjoy going for a decent walk or feel like visiting a place to go for a proper trek? Awe-inspiring rice terraces in Vietnam are something quite out of the ordinary. Giant, sloping mountains in areas such as Sapa or Ha Giang have been carefully dug out to create shelves for rice paddy cultivation, these rice paddies boast radiant colours of different greens, yellows and gold, as they mature throughout their growth cycle before finally being harvested. The rice terraces of northern Vietnam have been voted as being some of the world’s finest by a number of travel magazines over recent years. Witnessing this beautiful occurrence is seasonal; the best time to go is between the months of June to October, where you may see these terraces in all their famed glory.

Our suggested tour: Postcard of Vietnam 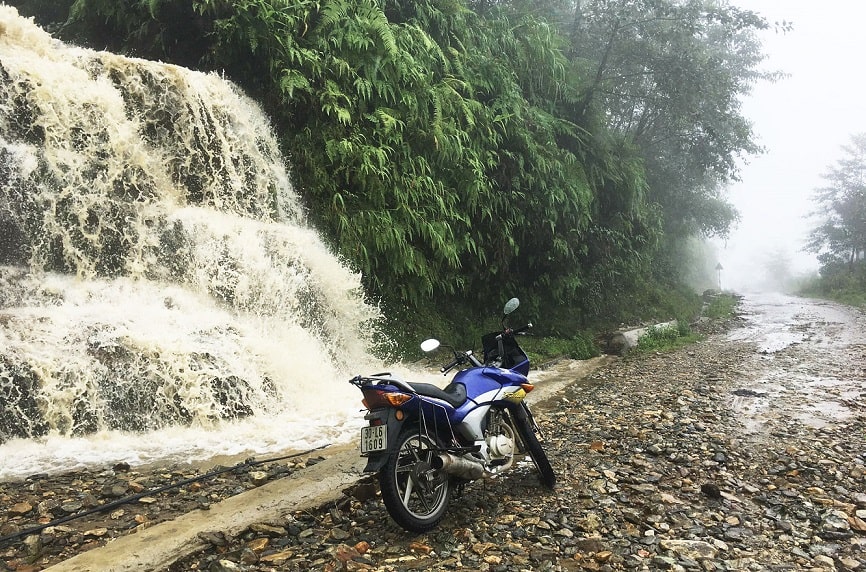 An exciting mountainous trail somewhere in the north of Vietnam

What’s the best way to thoroughly witness one of the most bio-diverse, historic and vibrant places in the world? By motorcycle, of course! Spend your days with the freedom to travel anywhere, anytime and at any pace that you feel is suitable. Going around Vietnam by motorcycle is becoming increasingly popular among adventurous travelers. Never ridden a motorcycle before? Not to worry, various tour operators offer trips spanning in and around major cities, as well as some offering trips all the way from top to bottom, or vice versa with you riding along as the passenger. While visiting either Hanoi or Ho Chi Minh City, we highly recommend taking an interactive Vespa tour; it’s a great way to see the highlights from the perspective of a local on a scooter!

Either purchase a cheap second-hand bike then resell it once you’ve reached your final destination, or you may optionally rent a bike. Renting usually comes with a few more options; having a selection of bikes to choose from and round the clock technical support should you have any queries during your trip or in case anything unexpected happens, such as a breakdown. Now that you’ve had some insight into a few different places to go to, some things to do and see, why not take a look at a few of our sample itineraries here, which are entirely customizable to your wildest hopes and desires.