It is often said coming to Bangkok in the rain season would be a nightmare due to the heat and humidity here but for me, it's totally different. During daytime, you can easily get burned by the sunlight but after the short rain in the afternoon, the weather turns pleasant with cool breezes. It’s time for you to explore Bangkok bustling nightlife especially the food tour. I live in Hanoi, Vietnam and have traveled to so many food paradises in Asia like Singapore, Kuala Lumpur, Chengdu, Tokyo, Seoul…,however, Bangkok amazes me the most in terms of street food. Colorful dishes with all types of herbs, strange species lure me into this sleepless city food world. In my two previous trips, I just walked down busy streets in Bangkok Chinatown and Chatuchak and tasted everything I wanted. This time, the food experience was totally different as I joined a group of ten people from all over the world and escorted by a Thai girl named Mod (apologies if it's spelt wrong)- who lives in Bangkok for 25 years of her life. Thank god, I didn’t need to walk too much as we traveled by tuk tuk. Another thing that made this night more special was that we would explore a slice of local life and know where Bangkok people will go for eating on Friday night! Sound Interesting? Let’s get it going! We all received a leaflet (actually a menu) of 7 food and drink that we would taste this night. Among all, there were 2 secrets to unlock and 5 interesting places to remember, which was quite enough for a long night like this. Keep in mind, buddy, you should empty your stomach before going as the tour will start from 7 until midnight.

1. Isaan, Central or Southern dishes? Which one is better

Bangkok in the rain season is too changeable that just 1 minute after Mod's saying “ there will be no rain today”, it rained. But thanks to the rain, the air was cooled down and we had fun time on our tuk tuk (only two people per tuk tuk) with latest Billboards songs, watching the locals passing by. We first stopped at a restaurant with a name that I’m sure no one could remember. As from Mod, Thailand cuisine is divided into 3 regional styles: Northern (or Isaan), Central and Southern one. They all have 4 flavors: sweet, salty, spicy and sour but differ in the level of each flavor. Northern food is the saltiest and spicy, Central one is sweeter and in the South, it’s sourer. The first stop is famous for Northern food (or Isaan food), which is absolutely new to me. Though I traveled to Bangkok twice, It was my first time to taste Isaan food. In Vietnam, there are also 3 regions and each one has its own tastes and style of cooking. The restaurant offered all well-known Thai dishes but the flavor is slightly different. 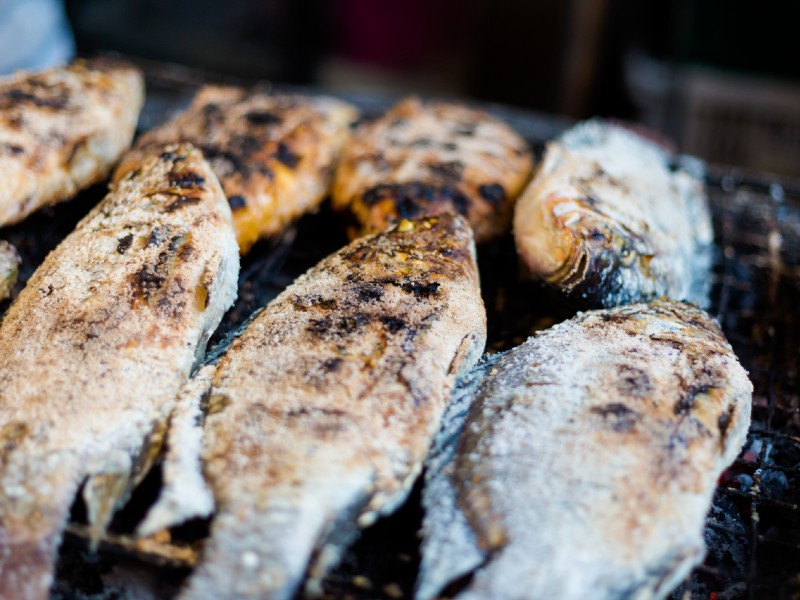 2. Unlock the very first secret dish of the night

The next stop in our food tour was the first secret of the night. We did not know anything until we were all driven to a small restaurant with 1 floor and ...10 tables. This restaurant is very famous to local Bangkok people. We saw no foreigners there except us. After waiting for 10 minutes under the small lanes in front, we found our seats. There we go! Our food was served and the secret was gradually revealed.

At first, I thought that they had 2 dishes but in fact, they sold only one but with two variations- Scrambled Egg and Omelete. The dish was called Guay Tiew Kua Gai. It was created by Chinese people such a long time ago when they migrated to Thailand after World War II and added Thai flavor. It is made from white rice noodles (it looks very much like Pho in Vietnam) stir-fried with chicken, Chinese salted cabbage “tang chai”, with scrambled egg or omelet and finally seasoned with different Thai spicy or sauces like soybean, Sriracha hot sauce. I really liked this dish as I can customize the flavor by adding more or less spicy as I wish, the same way when I eat Pho in Vietnam. This dish also reminded me of stir-fried Pho. However, what made me like this dish was not the dish itself but the experience we had with the cook in the kitchen. We were lucky as that day the restaurant was not crowded (I think because of the rain one hour before) as normal, thus, we were allowed to visit their kitchen and watch how they cook this dish. Check out our video to find out! The cook here is very skillful at controlling the fire as everything is done within 3-5 minutes. As for Mod, to master this dish, it takes them at least 1 year to learn controlling fire and using pan only. Please take note that this dish was made with pig fat and oil so if you are vegetarian, maybe this restaurant is not for you.

After eating 5 dishes within 1 hour and a half, we felt a little bit full, thus, Mod took us for a walk around the Chinatown area. The next stop was a special place as it opens all day long and every day in the week… Yeah! It is Pak Khlong Talat market, the biggest flower market in Southeast Asia and the second largest one in the world (the biggest one is in Amsterdam). Though this is a flower market, there are so many things here to explore: local food, fruit, vegetables, herbs, spicy and the like. Here is the best place to get the insight of Bangkok local lives.

For the first time in our life did we see such a huge amount of flowers of all types and most of them are so strange to me. Thanks to Mod, we found out a secret to keep flowers fresh every day. It’s Ice. They keep flowers in a big package with ice and change it with another whenever the ice is melted. Thailand is a Buddhism country so Thai people often go to temples and pagodas whenever they go out and they often buy flowers to offer to Buddha. That night we learned how to turn a Lotus into a… white rose to offer the former Kings of Thailand and Buddha.

This market is totally a maze, that means if you go by yourself you will get lost easily! The advice for you is to get a local guide who can take you to visit the best places in the flower market and save you from losing your own way. Believe me, losing in this “maze” ain't a good experience especially when you can’t understand any Thai words and the weather is too hot.

In case you lose your way in Pak Khlong Talat, there would be something to cheer you up. It’s Fruit, but it's not a normal one. Yeah, it’s small,...ah no, tiny pineapples like these.

Like flowers, to keep the fruit fresh, the street vendors often keep them in a small box with full of ice, thus, when it’s served, it will keep the original flavor and very cool like taken from the bridge. These cold tiny pineapples, papaya, mango or watermelon are the most favorite of Bangkok during rain season and I’m sure, of foreigners as well. Imagine when you walk for 1-2 hours under the heat of summer here and eat this tiny gift! It’s like heaven.  After this sweetness, we headed to a very popular spot in Bangkok- Wat Pho.

Wat Pho was definitely a surprise that night as this pagoda often closes after 5 PM. It was lucky that today I went with Mod in that tour, we were allowed to “break into” this stunning pagoda. At night, when the light was on this pagoda truly rocks. If in the morning, you are amazed by the large statue of reclining Buddha, you will like the story of four kings represented by four stupas sparkling for hundreds of years.

6. Grasp the whole ancient Bangkok in one view at a secret bar

We met our tuk tuk driver at the back of Wat Pho and all headed to the second secret place-a bar that faces to Wat Arun- the temple of dawn (since that day, I start calling it temple of night). This bar is right next to Sala Rattanakosin but to get there, you have to walk into a small lane and pass some few houses. After that, you still need to climb 1, 2, 3 and 4 floors with steep stairs to the rooftop where all the glorious moments of Bangkok could be captured. 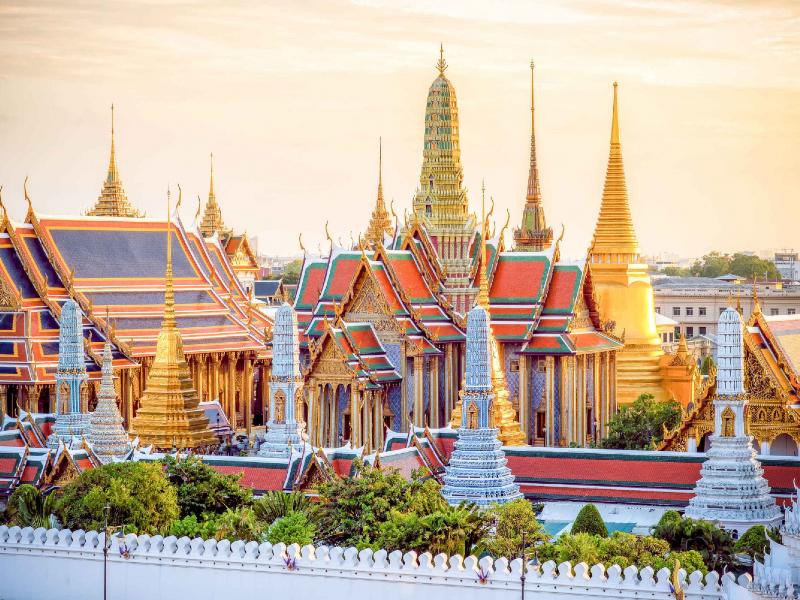 Though this journey to the hotel and the rooftop could be a terrible workout, it’s worth every penny. From this rooftop, you can see the Grand Palace on the right-hand side and in front is the sparkling Wat Arun. This place is on top 10 must-visit bars in Bangkok at night especially for couples who seek a little romance in this bustle of this city. Take a sip of a coconut cocktail here before getting to the last stop of the night. But don’t drink too much as we still have 1 more food left.

7. In Queue to eat at the most famous Pad Thai restaurant

Last but not least, we ended up the Bangkok night food tour with a very popular food- Pad Thai. 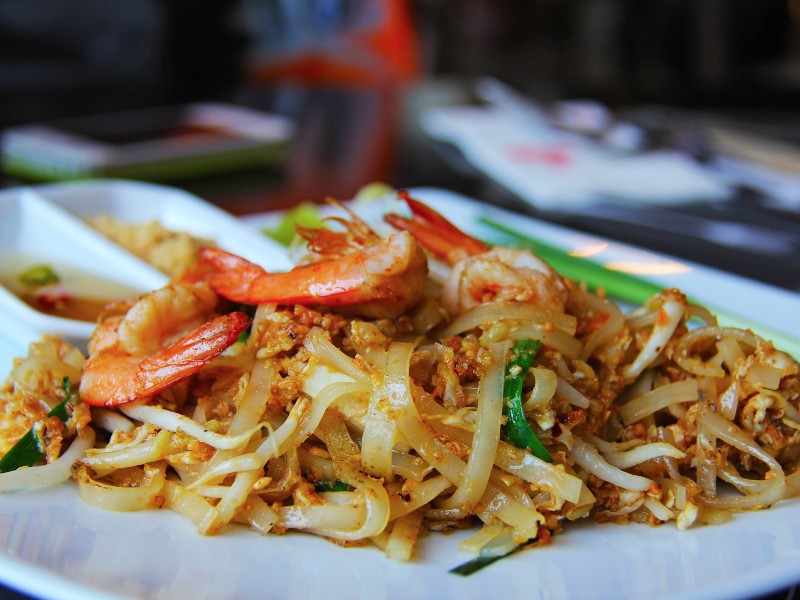 I ate Pad Thai several times before but this time, it was more special as we visited the No.1 Pad Thai restaurant in Bangkok named Thip Sa Mai (oh this name is quite easy to remember). I had to agree with Mod that Pad Thai was the soul of Thai Street food by all means. First, cooking it is like you are performing cooking art show on the street. Second, it appears in every corner of Bangkok, Phuket, Chiang Mai… all over Thailand. Besides, it tastes good and favored by foreigners. Speaking of this restaurant, it has a very long history - nearly a century of selling pad thai and the signature pad thai is very unique and outstanding among all other restaurants. It’s made from brown pad thai noodle stir-fried with… fresh prawn. The key thing here is the noodle and the prawn. All things will be mixed together to level up the flavor. It marked a perfect ending for the tour before we go back to hotels in a dancing tuk-tuk. A night out in the style of Bangkokian is a must-have experience for any visitor who wants to explore the "real" daily life of Thai people instead of being trapped in touristy places or shopping malls. However, make sure you can find a good local guide who knows every corner of Thai as she/he could introduce you to some secret places which tourists may never know or come to.

8. Want to have a Bangkok night-out like we did?

This special experience is now featured in some of our tours and packages. Check it HERE