Vietnamese cuisine doesn’t win any point for complexity. Many of the most popular dishes can be found just as well on the street vendors run mostly by women as in a fine dining restaurant. It’s always a surprise for me that the broad spectrum of dishes can be amazingly diverse for such a small country. The delicacies I thought that are the best tend to be more flavourful when I try them in other regions of the country. But, what makes Vietnamese food so delicious? There are more than a few reasons but here are 3 primary reasons that can reveal the art of cooking in Vietnam:

- The talented use of herbs and spices: Rather than having one note predominating the flavor of a dish, Vietnamese cuisine uses a combination of flavors. Each bite feature a different flavor. And there is a great combination of sweet, bitter, salty, and sour.

- There is a wide spectrum of textures: Along with the flavors, Vietnamese cuisine owes a lot of its deliciousness to the impressive variety of texture. Like Banh Mi, it’s full of contrasting textures, with the chewiness of barbecued meat and pleasing crunch of the baguette.

- Vietnamese food combines the best of ingredients: The food looks simple but think about how many ingredients that goes into one dish. Bun Cha, for example, there’re a lot of vegetables and there’s a great number of different ingredients that go into marinating and grilling meat. And finally, the creation of fish sauce that pours over the meat. It’s a mixture of things such as fish sauce, sugar, vinegar, minced garlic and chilli to tune to sauce. There’re a lot of vegetables and a great number of different ingredients that go into marinating and grilling meat in Bun Cha.

Even though Vietnamese cuisine asks for quite a lot of time to prepare, it’s pretty easy for everyone to make. You can taste Pho on the side-walk stalls, at an open-air market, or when you’re invited to a local family: they all taste delicious. If you want not only to taste the dishes but also to create some flavors that explode in your mouth, spend half-day to join a cooking class where you’ll learn about the main ingredients and cooking technique of Vietnameses. Wonder how a cooking class in Vietnam might look like? Follow me to a cooking class in Hanoi to discover.

Here are what you can expect in a cooking class in Vietnam:

Know about the Vietnamese cuisine

We were transferred to the cooking class. Upon arrival, we were welcomed by a drink and Cong - who was also the chef - gave us a brief introduction of Vietnamese cuisine: history, ingredients to make the dishes, popular dishes of the locals, their eating habits, etc.

Get insight into the local life

I love the local market that Cong took us to visit. It is so colorful, so lively, and so local. Even though there are hundreds of stalls selling vegetables, fresh meat, seafood, cooked food, fruits, flowers, busy buyers and sellers but the market is organized and clean. We walked, learned, and explored so many things about the city on this market. We sampled specialities of Hanoi. We tried the fruits. We listened to stories. We bought the ingredients for our cooking session. We chatted with the locals and smiled with the kids. We enjoyed being surrounded by friendly Vietnamese people and the atmosphere that the market brought to us. 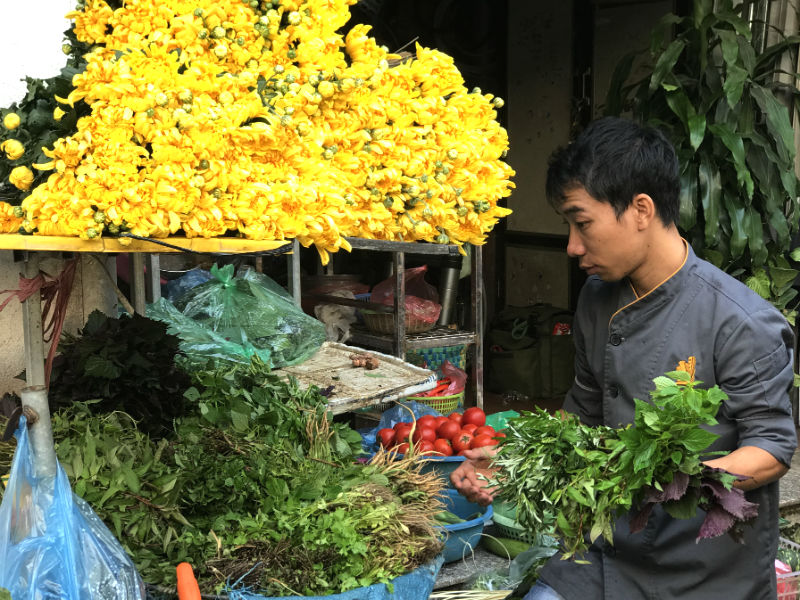 It was autumn in Hanoi. The weather was great: cool and windy. We walked with Cong, our chef. He stopped sometimes to tell us about the shopping habit of Hanoi people. In the picture, Cong showed us many kinds of herbs in Vietnam. 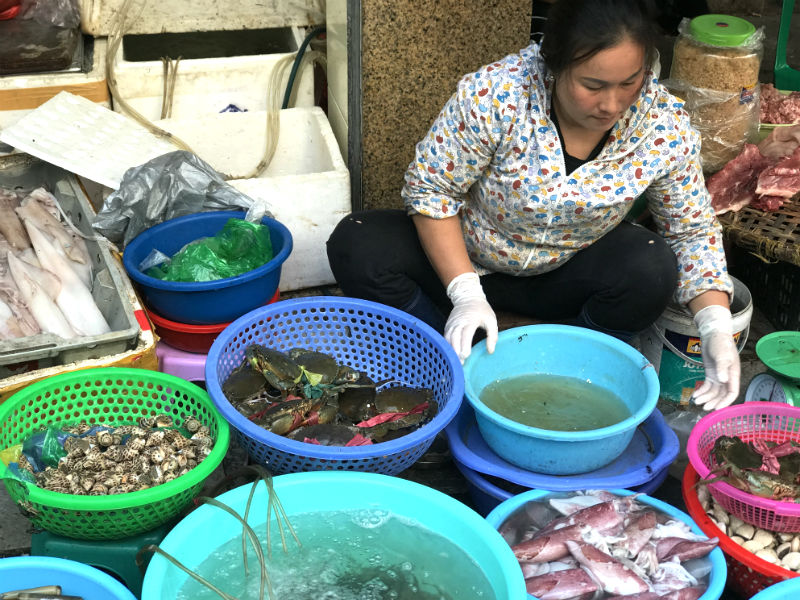 Most of the local people go to local markets early every morning, buy the food they need for the day. Vietnamese people like fresh food. 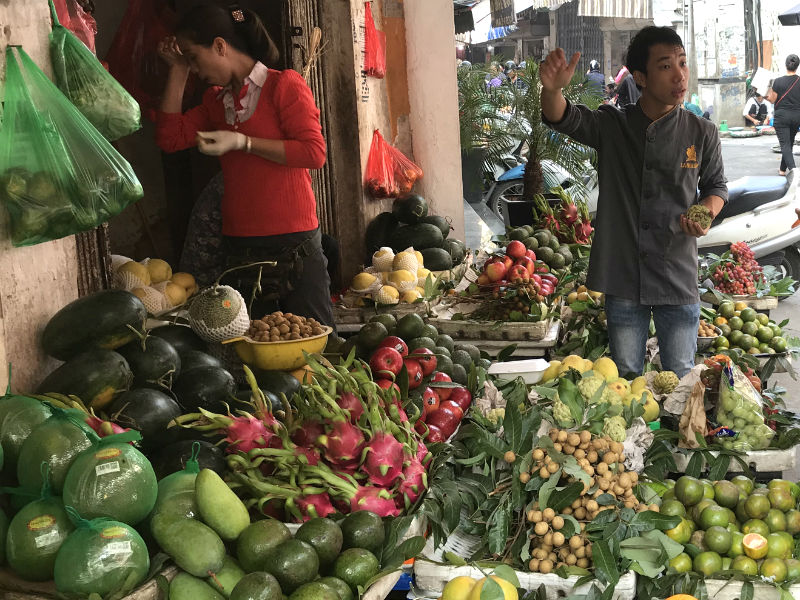 Vietnam has soooo many fruits. We tried some of them. They were all great. 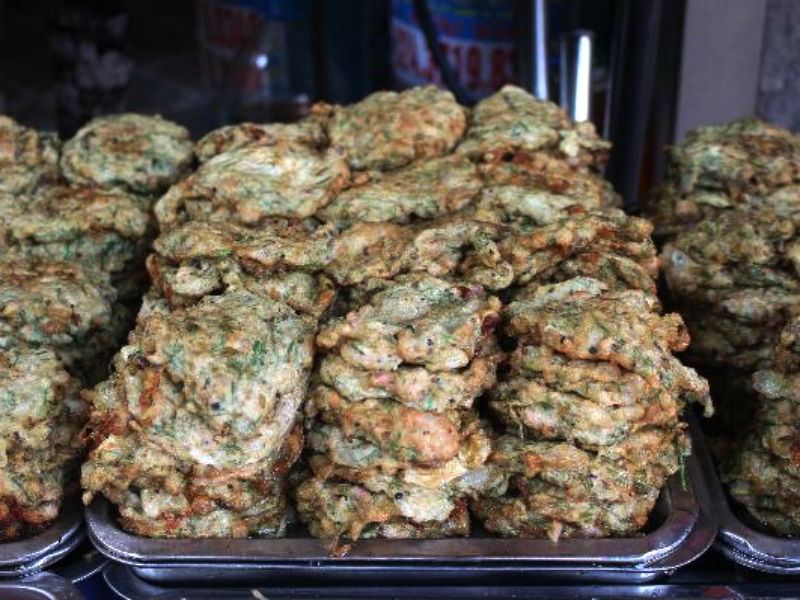 We also sampled other specialities of Hanoi. This food is a mixture of ragworm, egg, minced pork, and sallot. If you dare to try, it tastes delicious. 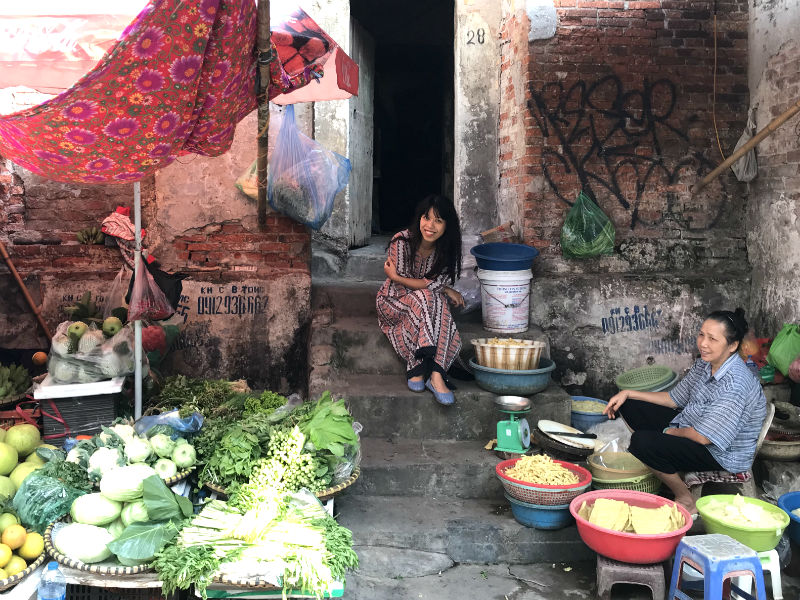 Hanoi has a lot of stories to tell. Each of the street, house, alley has its own story. See the hole behind me? If you walk into it, through the 20 meter dark alley, there are 10 families living inside, sharing 3 bathrooms and 3 toilets. And that isn't a new thing in Hanoi. 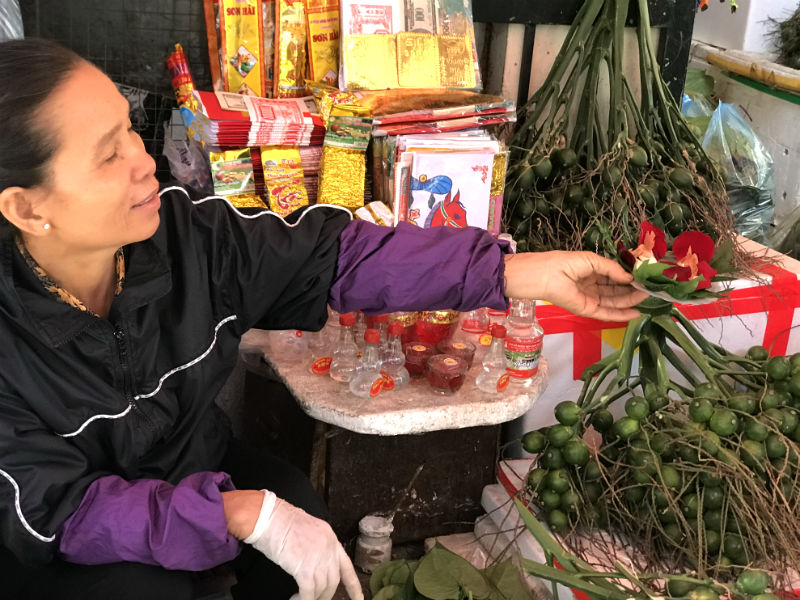 These areca nuts were once often chewed along with betel leaf and lime by Viet people. There are only a few of old women chewing it now. It has a sad love story The story says that: One upon a time, there were a family that had two sons. One day, the elder brother got married. He loved his wife so much that he neglected his younger brother sometimes. The younger brother was upset, left the house and kept walking until he was tired. He stopped near a river and died. After that, he incarnated into a limestone. His brother, then his brother's wife sequentially went to find him. They all died next to the limestone. The man incarnated into an areca tree and the woman incarnated into a betel, wrapping around the areca. From that day, Viet people often offer acera nut, betel leaf, and lime on the wedding day as a symbol of Love and Loyalty.

Learn something really new. And fun

We made a cyclo riding through narrow streets of Hanoi to get back to the class. We learned to make Pho, Bun Cha, and Nem Ran (Fried Spring Rolls). In fact, the broth of Pho often needs around 10 hour simmering with beef bones and herbs to taste the best. So it was prepared for us. I found chopping the pork meat was the hardest work. I had to cut the meat into thin, long chunks then grabbed two big knives and chopped the meat rapidly with hammer-like motions. You will then have to scoop the meat into a pile, turn it in a circle, then continue chopping, pilling, and turning the meat until it reaches a consistency of tiny pieces. The minced meat were put into two different big bowl. One was marinated with chopped shallot, fish sauce, caramel sauce, and pepper  to make meat patties in Bun Cha. The other was mixed with carrot, onion, dried mushroom, vermicelli (all were chopped), yolks, fish sauce, and pepper to roll the Nem Ran. We cried when chopping the onion. We tried hard to make the minced chilies and garlic floating on the surface of the sauce. We laughed when the triangle spring rolls we were trying to form turn into no shape. We had fun having our hands on every step of making the dishes ourselves with the instruction of two chefs. 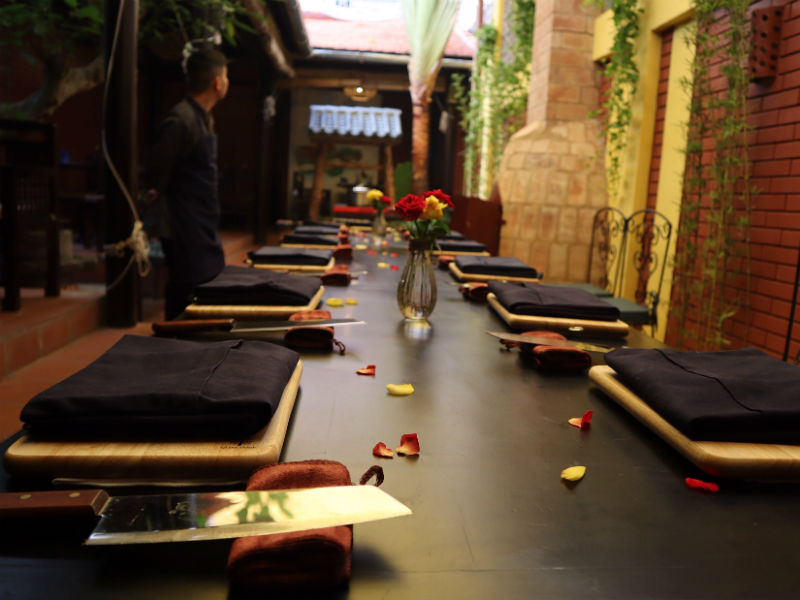 The cooking space was ready when we came back So was the fireplace 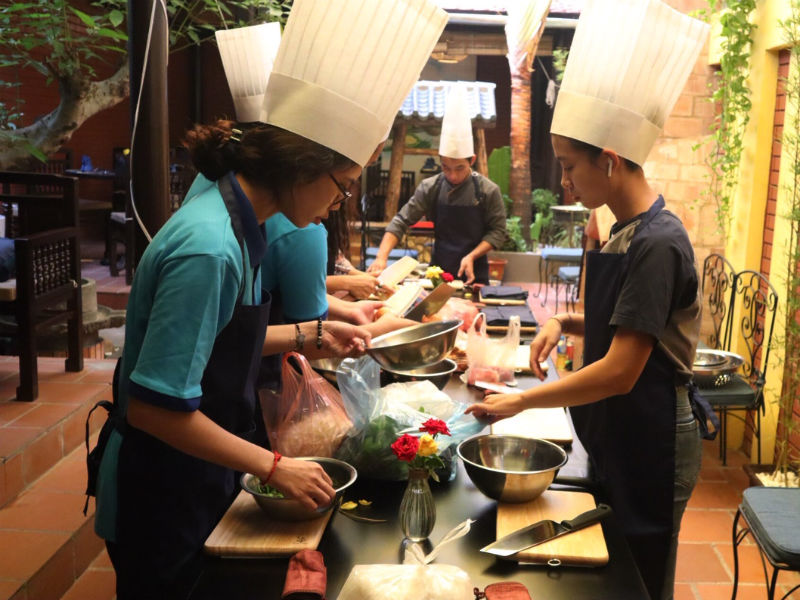 This was the first time I chopped the meat by 2 big knives. It was a tough job, required skillful combination of both hands. I gave up. 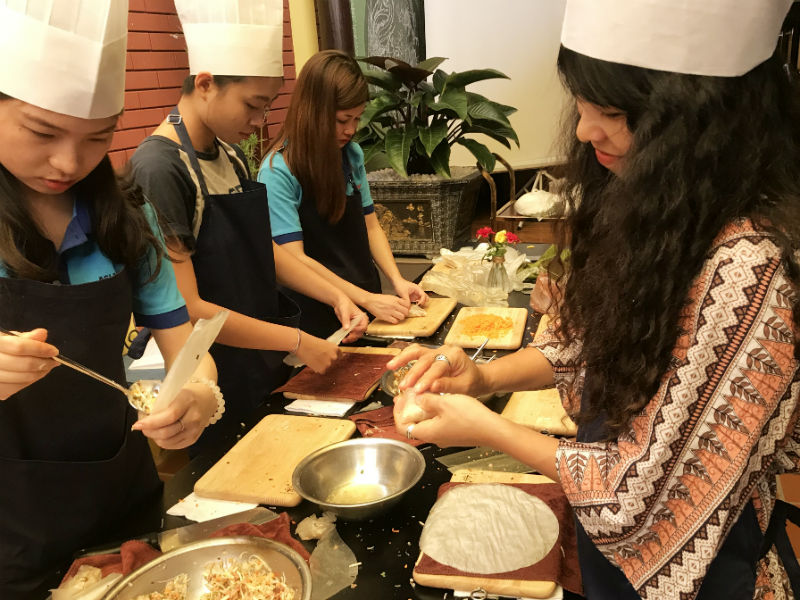 Rolling the triangle spring rolls seemed more suitable to me 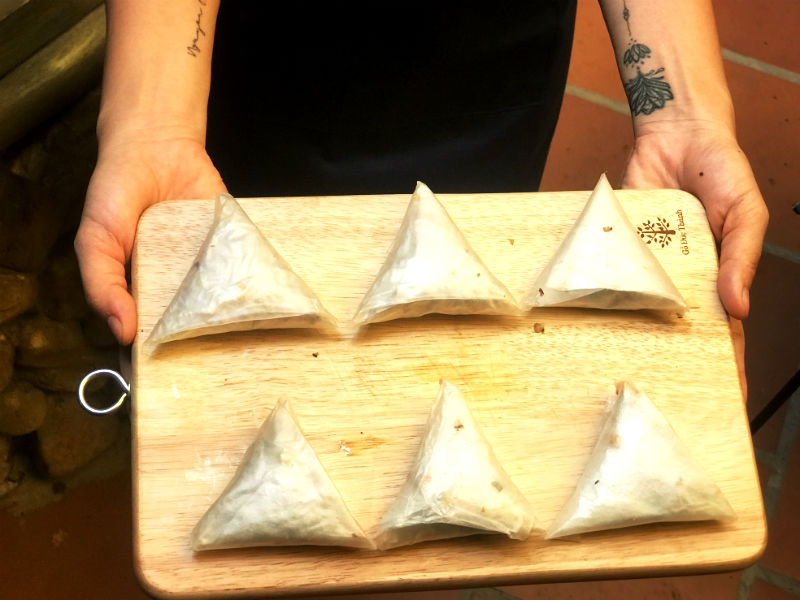 As I did pretty well. 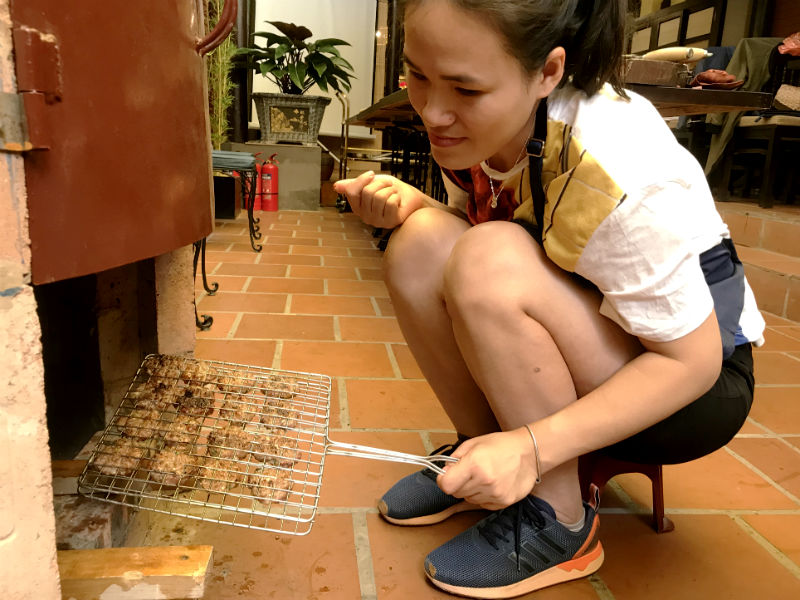 Annie, my colleague, was checking the grilled meat patties very carefully. She should be because we would eat what we cooked It was well cooked. Smelled delicious and tasted great

We fried the Spring Rolls. We grilled marinated meat on the charcoal. We placed the noodles on the bowl, topped with thin beef slices, then poured the hot broth over it. We made the food and smelled the delicious scents. The cooking session happened longer than we expected. We felt hungry as if we could eat a horse. The dishes we cooked were so great and tasty. Of course, we had tried our best to make them. 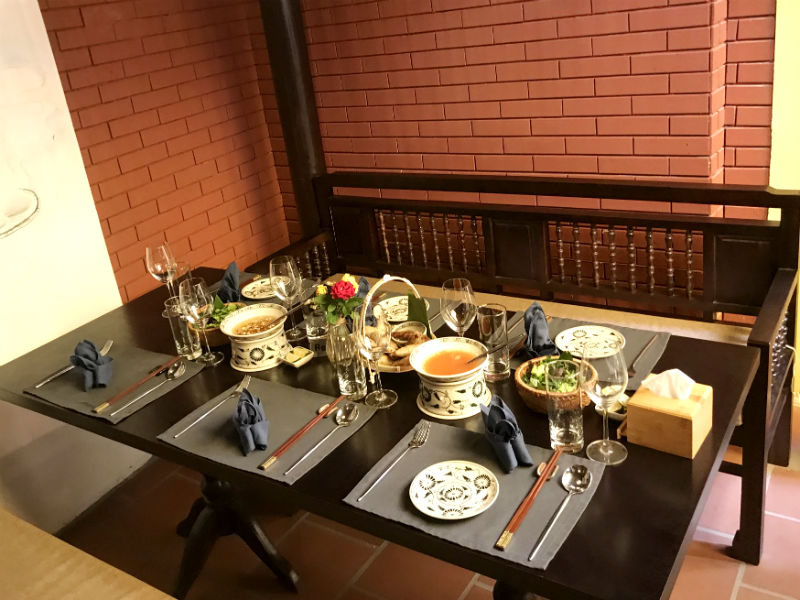 The table was set while we were cooking All the dishes tasted soo good. We had made the great work.

And get a certificate And finally, we got a certificate of Vietnamese cooking. For our efforts. Does that mean we’re masters of Viet cuisine now?

Read more stories on our blog or check out our best-seller tours to plan a trip to Vietnam. Don't forget to add on your trip a cooking class.