Top 4 Temples In Angkor Not To Miss

Home Travel Blog Top 4 Temples In Angkor Not To Miss

Most tourists choose to visit Cambodia because of its so famous temples. The temples in Angkor show ancient religious architectures, which represent virtually anywhere in Asia. The ruins of Angkor will leave an indelible impression to any visitors when coming here. We will provide you 4 most famous temples in Angkor that you should not miss on the way to discover Cambodia.

Angkor Wat is the most famous and largest temple. Its area accounts for approximately 200 hectares, the center of which is a shrine and tower at a height of 213 meters. The ruins is covered by a series of three rectangular terraces reflecting the traditional Khmer idea of Mount Meru, the home of the gods in Hinduism.

Angkor Wat was built under the reign of king Suryavarman II. The Khmer architecture in this reign mostly was the bas-reliefs encircling the temple, describing thousands of female dancers. They were carved into the wall of the third enclosure of the temple. In the late 13th century, Angkor Wat was no longer a Hindu temple but a Theravada Buddhist one. After the collapse of Khmer empire in the 15th century, Angkor Wat remained a Buddhist shrine.

The Bayon temple was built in the 12th century by King Jayavarman VII in the center of the royal city. The temple was a part of a massive expansion of Angkor Thom, with a height of around 43 meters. The outer describes scenes of everyday life and historical events, whereas the inner depicts mythical figures and stories, which relates to Gods Siva, Vishnu, and Brahma.

The special feature of this temple that attracts visitors is the existence of more than 200 massive stone faces looking in all direction. The Khmer people suppose that those curious smiling faces represent a portrait of king Jayavarman VII or a combination of the king and Buddha. Like Angkor Wat, Bayon temple is also a symbol of Angkor architectures. The Bayon temple has been a place where the Cambodians store their own religious beliefs.

Ta Prohm is the next famous temple in the ruins of Angkor. The Ta Prohm was a Buddhist temple, built from 1186. It is said that this temple was dedicated to the mother of Jayavarman VII. Then, Ta Prohm was home to over 12,500 people, including 18 high priests, whereas 80,000 Khmer people lived in the surrounding villages. 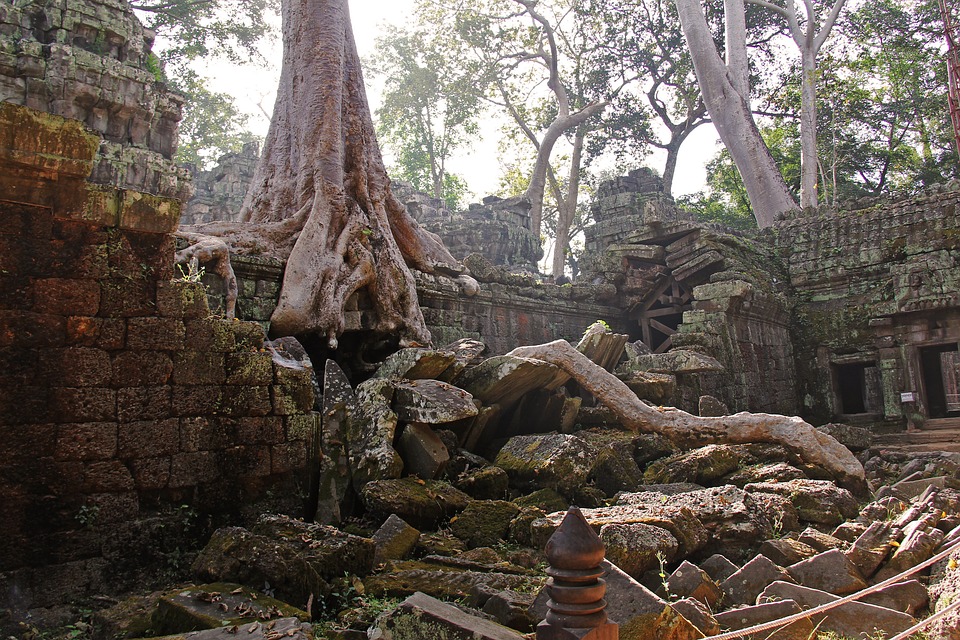 After the fall of the Khmer empire in the 15th century, the temple was abandoned and swallowed up by the jungle. That is the reason why Ta Prohm now is quite ancient and reminds of the awesome power of the jungle. The temple is surrounded by the green and growing trees, which is so friendly-environmental. Every tourist finds it so interesting when coming here and taking photos. 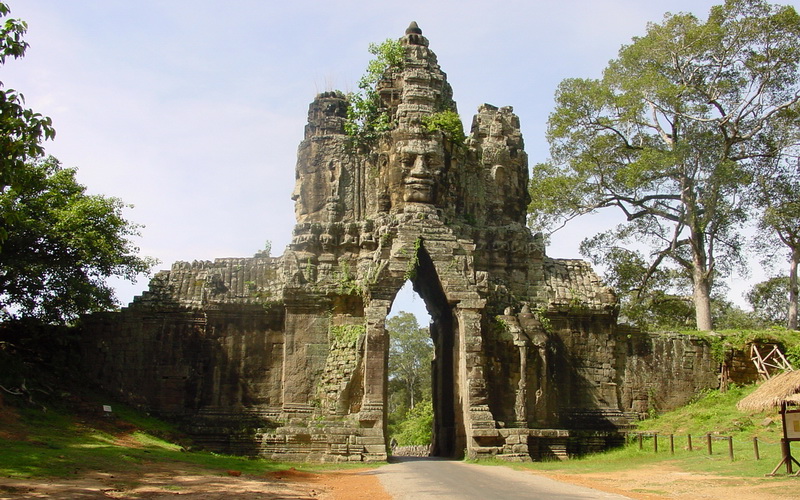 Angkor Thom is the last great capital of the Khmer empire. It was built on the purpose of protecting highly the country of King Jayavarman VII. It has the high walls at the height of 8 meters to prevent invaders from attacking the country. Angkor Thom has the same style as the Bayon. If you have chance to visit Angkor Thom, you will know more about the famous Hindu legend “The Churning of the Ocean of Milk”, which connects closely to the architectures of this temple.