Founded in 1296, Thailand’s unofficial second city of Chiang Mai attracts visitors from all over the world with its blissful calm and laid-back vibe to relax and recharge. Despite being the second largest city after Bangkok, Chiang Mai is still more like a sleepy country town with rice fields and lush green forests just a short drive from the historic center.

Chiang Mai served as the capital of the Lanna Kingdom when it fell to Burmese in 1558. More than 300 serene Buddhist temples, or wats, showcase Thai rich culture, history, and talents of local artists through their unique and beautiful architecture.

On my trip to Chiang Mai in August, I had the opportunity to visit some of the best temples in Chiang Mai. My visits gave me the answer to many of my questions about the important role of Buddhism in Thailand. All the temples are just spectacular in architecture and are great as storytellers of the old time in Chiang Mai.

Below, you will find seven temples that you shouldn’t miss when you are in Chiang Mai. To know more about temple etiquette in Thailand, you can read here.

Established in the 14th century by King Pha Yu to house his father’s ashes, Wat Phra Singh is the most popular temple in Chiang Mai according to the number of visitors. It was originally named Wat Li Chiang Phra. When the Phra Singh Buddha image was brought here from Sri Lanka, the name was changed to its current name. During Songkran Festival, the Phra Singh statue is carried through the streets of Chiang Mai and the spectators splash water over it to gain merit. 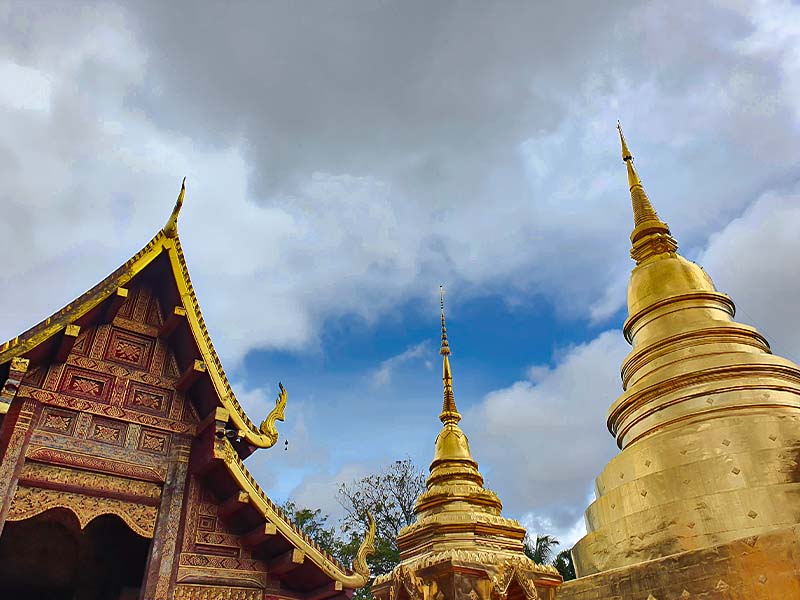 Located in the old city, Wat Phra Singh is the most popular temple in Chiang Mai according to the number of visitors 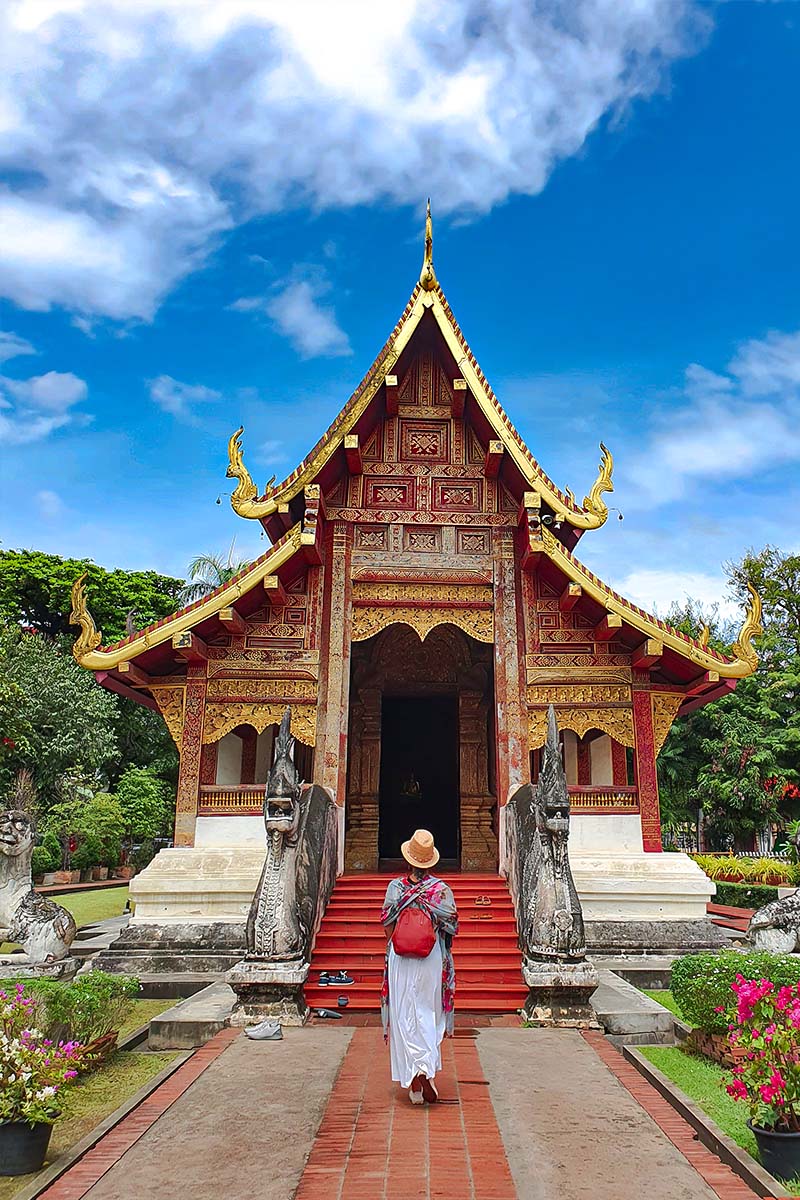 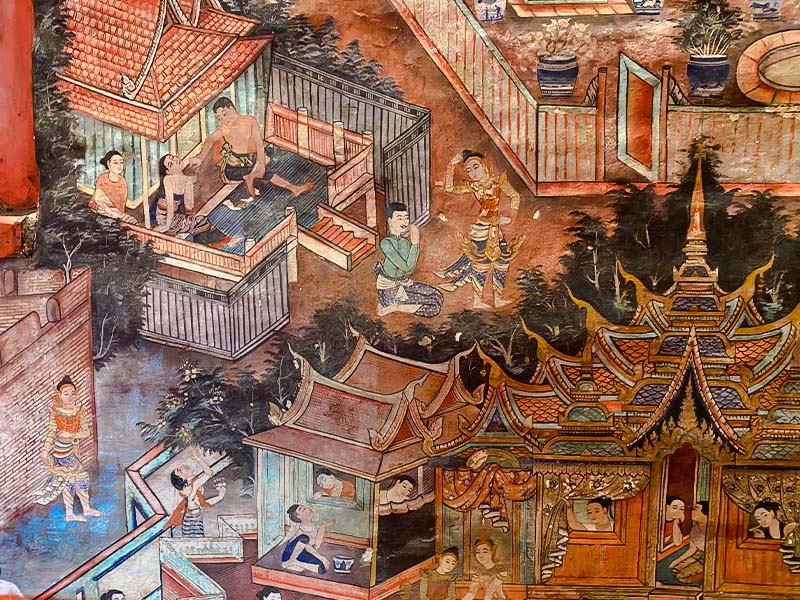 There are beautiful mural paintings on both sides of the walls telling stories of ancient Lanna life.

Located right next to the famous Wat Chedi Luang, visitors often miss this beautiful temple. Instead of skipping over this one, pair these two temples into a visit and you will have two good things simultaneously. Wat Phan Tao is like a monument to the teak industry in northern Thailand with heavy teak panels with an overlapping roof consisting of several tiers.

Built in the 14th century, Wat Phan Tao is one of the oldest temples in Chiang Mai. It’s like a monument to the teak trade with a prayer hall supported by 28 giant teak pillars and lined with heavy teak panels. Above the entrance of the viham, it is decorated with a gold peacock which is a Lanna royal symbol and represents wisdom. 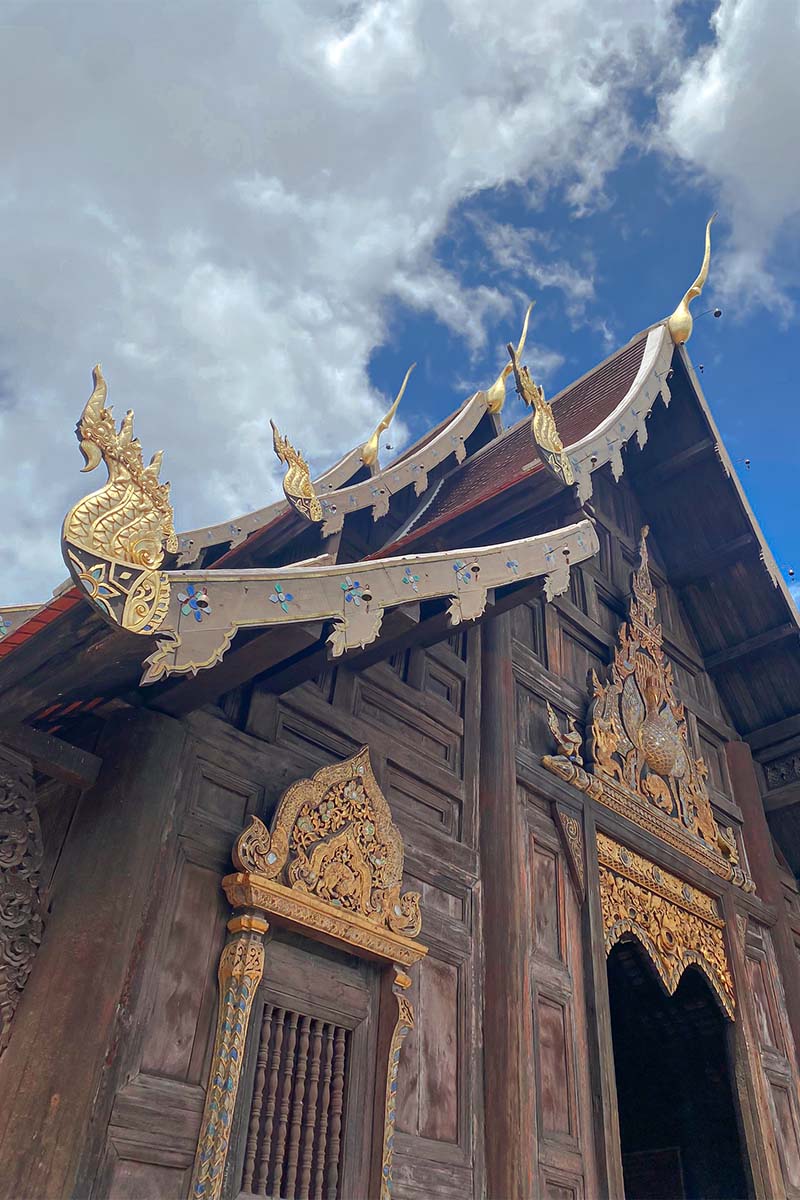 Flowers from pilgrims who visit the temple

A few steps from Wat Phan Tao is the marvelous Wat Chedi Luang. Built in 1441, this ancient monument probably is the largest and most beautiful structure in Chiang Mai. The top of the chedi was destroyed during the recapture of Chiang Mai from the Burmese giving it a look of a viewer of Chiang Mai history and time. The base of the stupa has 5 elephant sculptures that add elegance to the temple. There is Manamakut Buddhist Univerity in the temple complex. Wat Chedi Luang also hosts the most popular monk chats every day. Tourists are encouraged to sit under the shade of trees to talk with monks about Buddhism, their way of life, and Thai culture. 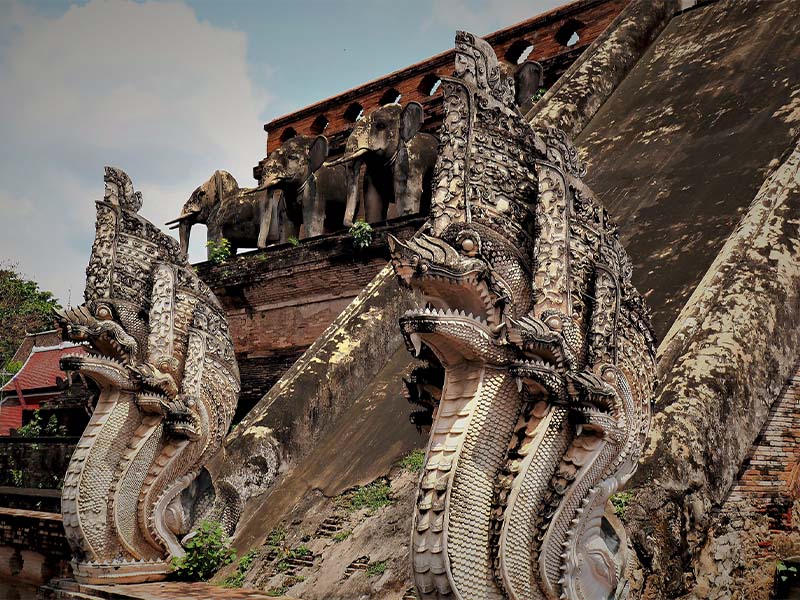 The construction of the temple started in the 14th century but didn't finish until the mid-15 century. It was the largest building of all Lanna at that time 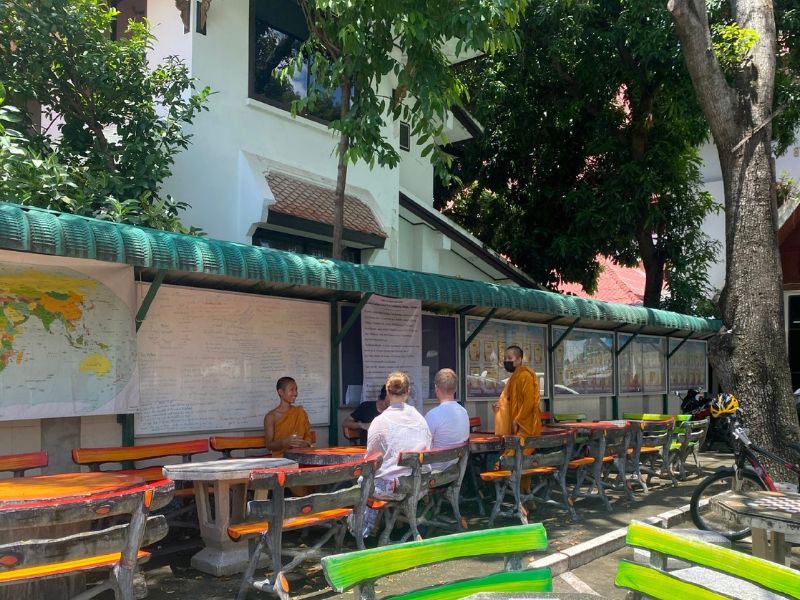 Overlooking the city and Ping River, Wat Phra That Doi Suthep is one of northern Thailand’s most sacred temples. It was established in 1383 to enshrine a piece of bone from Buddha’s shoulder. People said that a monk brought that bone from Sukhothai to Chiang Mai, and it broke into two pieces at the foot of the mountain. One piece is shrined at Wat Suan Dok and the second one was carried by a white elephant that wandered the jungle until it died. That place, later, was selected to build Wat Phra That Doi Suthep. 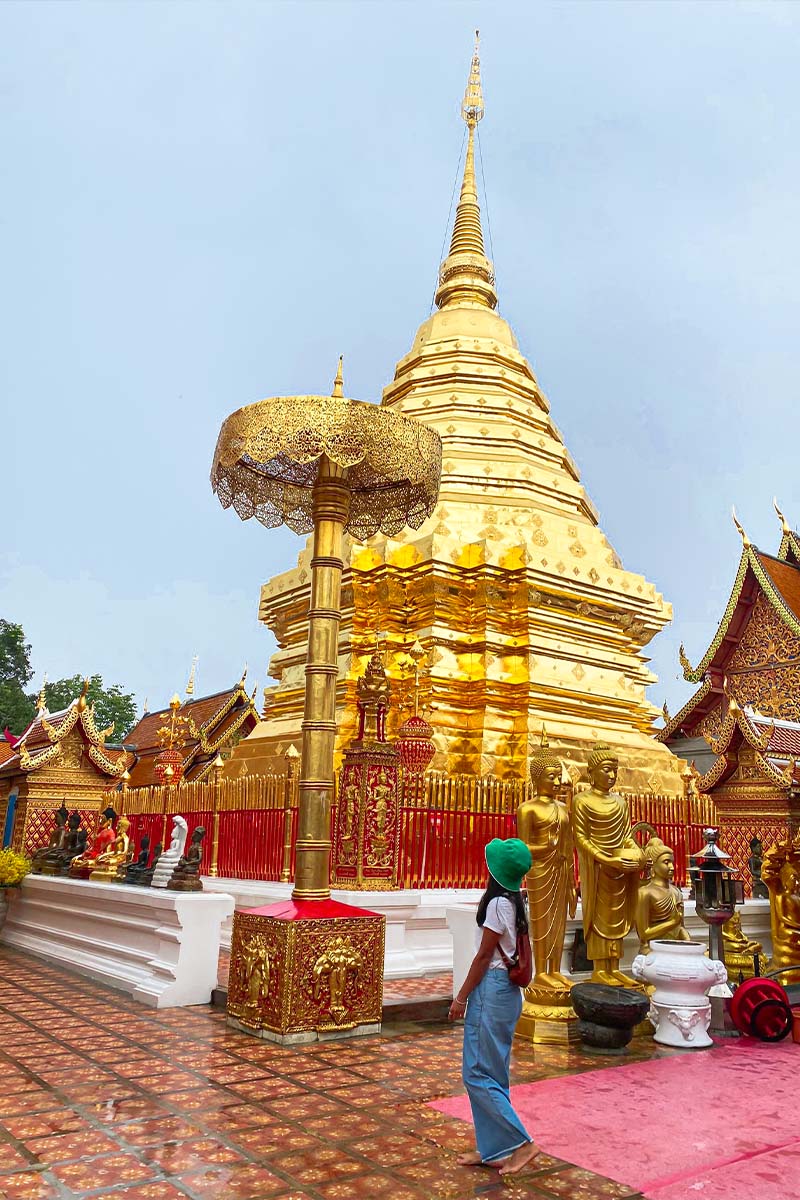 To reach the beautiful wat, climb up 306 steps of a staircase flanked by two mythical sea serpents. Thai people believe that the climb helps them accrue Buddhist merit. If you don’t want to walk, there are cable cars that take you to the top in 5 minutes. The top of the temple is the glorious golden chedi. Small copper bells are hung along the halls, and flowers and offerings are placed surrounding the chedi by pilgrims paying their respects to the sacred temple. This temple is home to a piece of bone from Buddha’s shoulder. From here, visitors can behold the spectacular sunset. 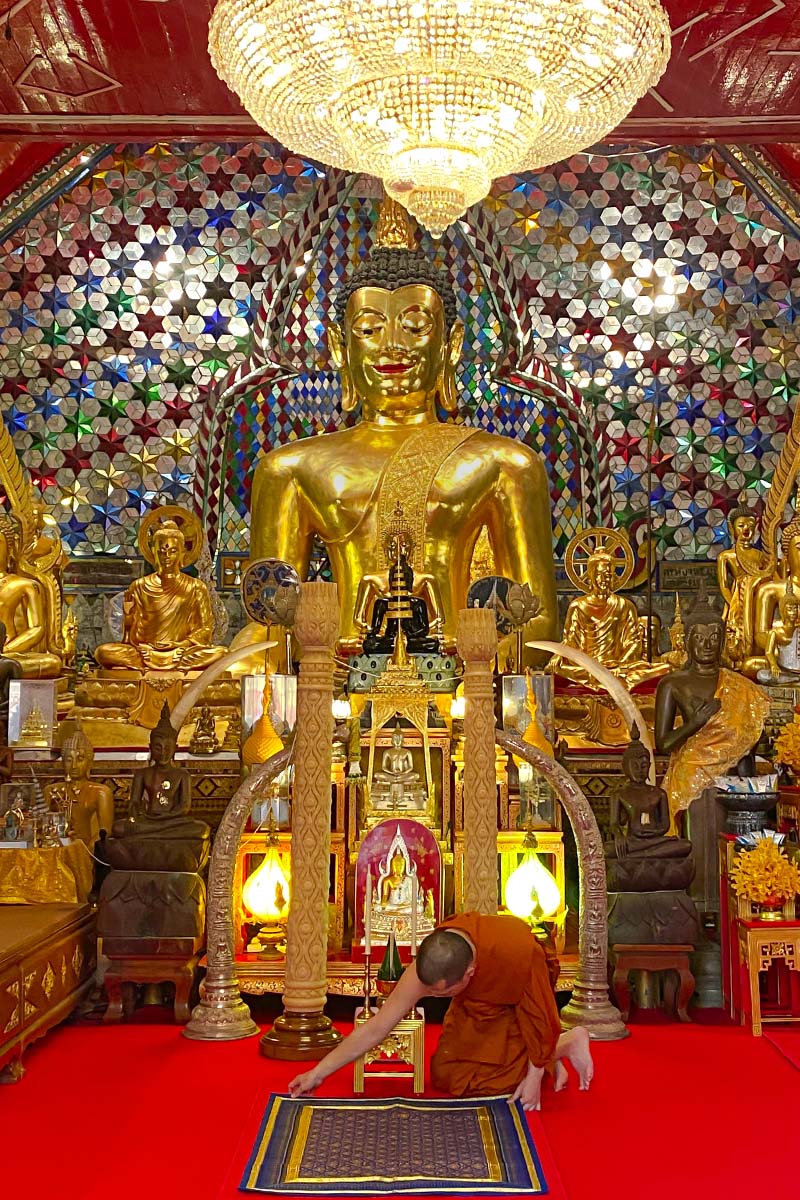 Wat Phra That Doi Suthep is a gorgeous Wat with an interesting story to tell about Buddhism.

Built from the ground of a former flower garden in 1373, this sacred temple enshrines one piece of a sacred Buddha relic as mentioned in Wat Phra That Doi Suthep above. The 48-meter-high main chedi is noticeable by its brilliant golden color rising outstandingly above dozens of white chedi that contain the ashes of the Lanna royal family, with spectacular views of Doi Suthep as the backdrop. Wat Suan Kok is one of the oldest temples in Chiang Mai, outstanding by its white chedis that contain the ashes of the Lanna King family

Wat Suan Dok is also the base of Mahachulalongkorn Buddhist University and it hosts monk chat programs on Monday, Wednesday, and Friday from 5 pm to 7 pm where visitors can gain a deeper understanding of Thailand’s cultural beliefs. The temple also runs one-day, two-day, and four-day English-language meditation retreats. 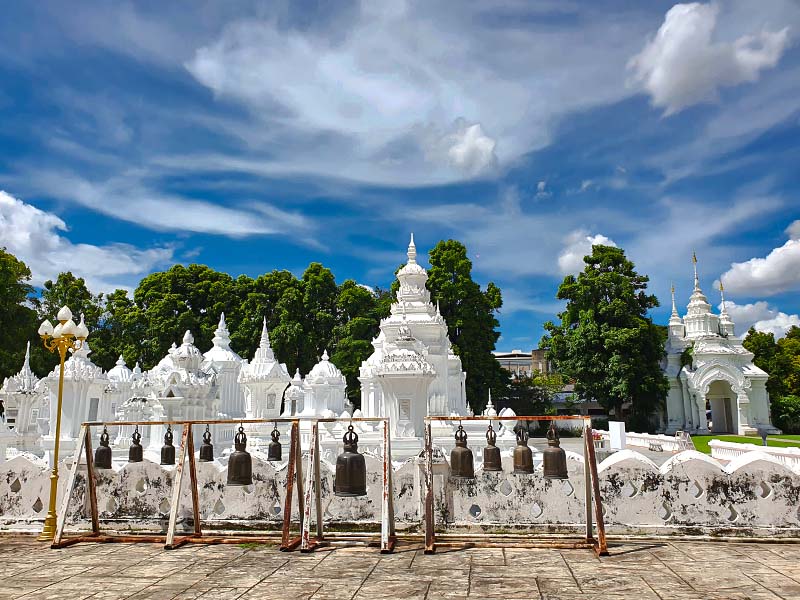 It used to be a place the kingdom in Lanna sent monks to study Buddhism. Nowadays, the temple houses the Buddhist Mahachulalongkornrajavidyalaya University. 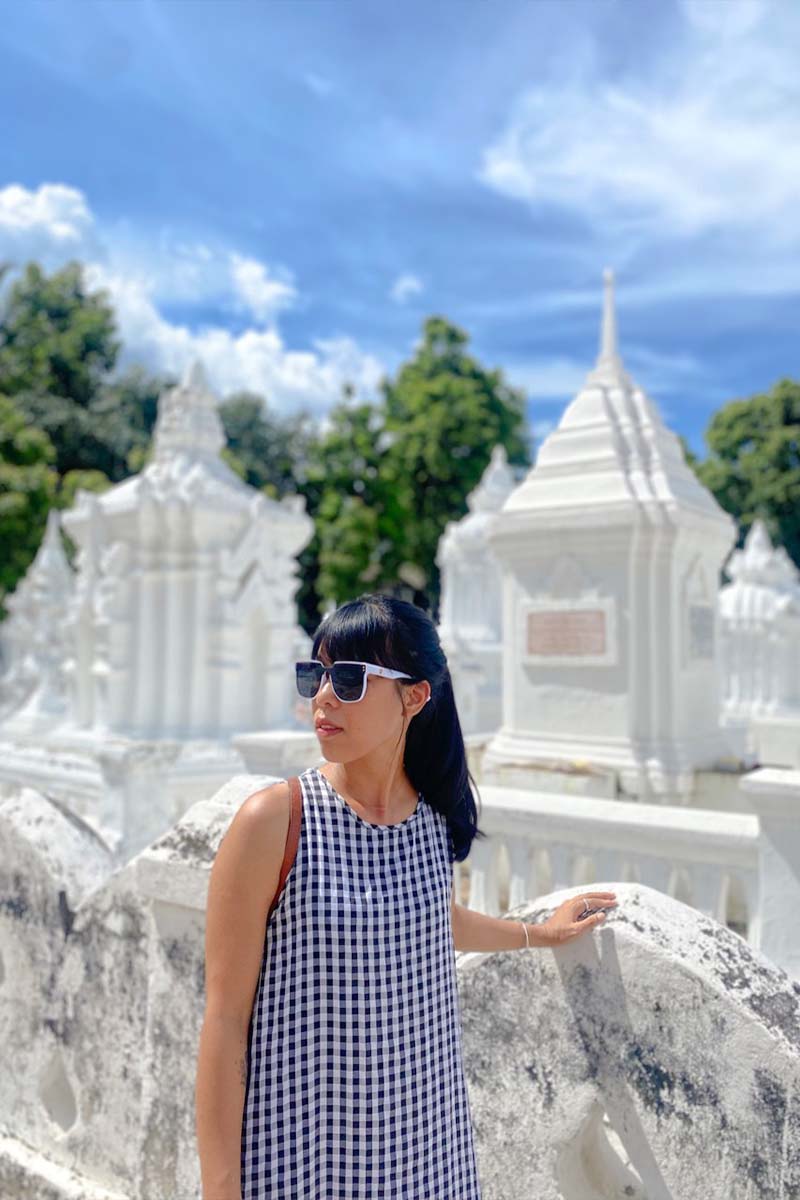 People who want to find inner peace can register for a meditation retreat.

Located just outside the old wall of Chiang Mai, Wat Lok Molee is one of the oldest temples in the city. Although the exact date is unknown, people believe that the first structure was built during the 14th century. 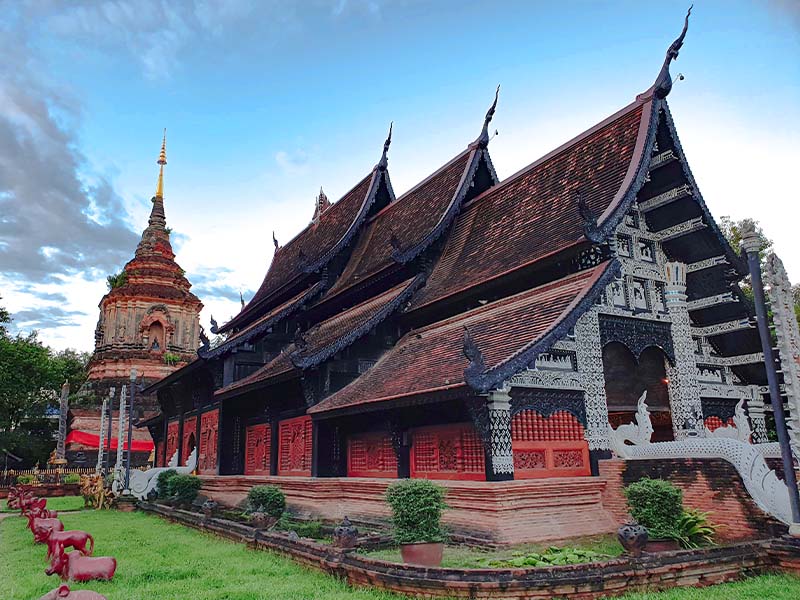 Built in the 14th century, Wat Lok Molee is considered one of the oldest temples in Chiang Mai. The viharn is made of teak, covered in black lacquer, in the traditional Lanna style

The brickwork of the massive chedi is left mostly bare and in a good condition after many time of restorations over the centuries. It contains the ashes of several Kings of the Mengrai dynasty who ruled the Lanna Kingdom from the 13th century until the Burmese’s invasion in 1558. When Chiang Mai was abandoned at the end of the 18th century, like many other temples in the city, Wat Lok Molee was deserted. A big renovation during the second half of the 20th century has gained back its reputation. Come at around 4 pm for the monk chanting ceremony. The temple was known as a royal temple in the Mengrai Dynasty. King Kuena invited Burmese monks to live in the temple and spread the teachings of the Buddha. 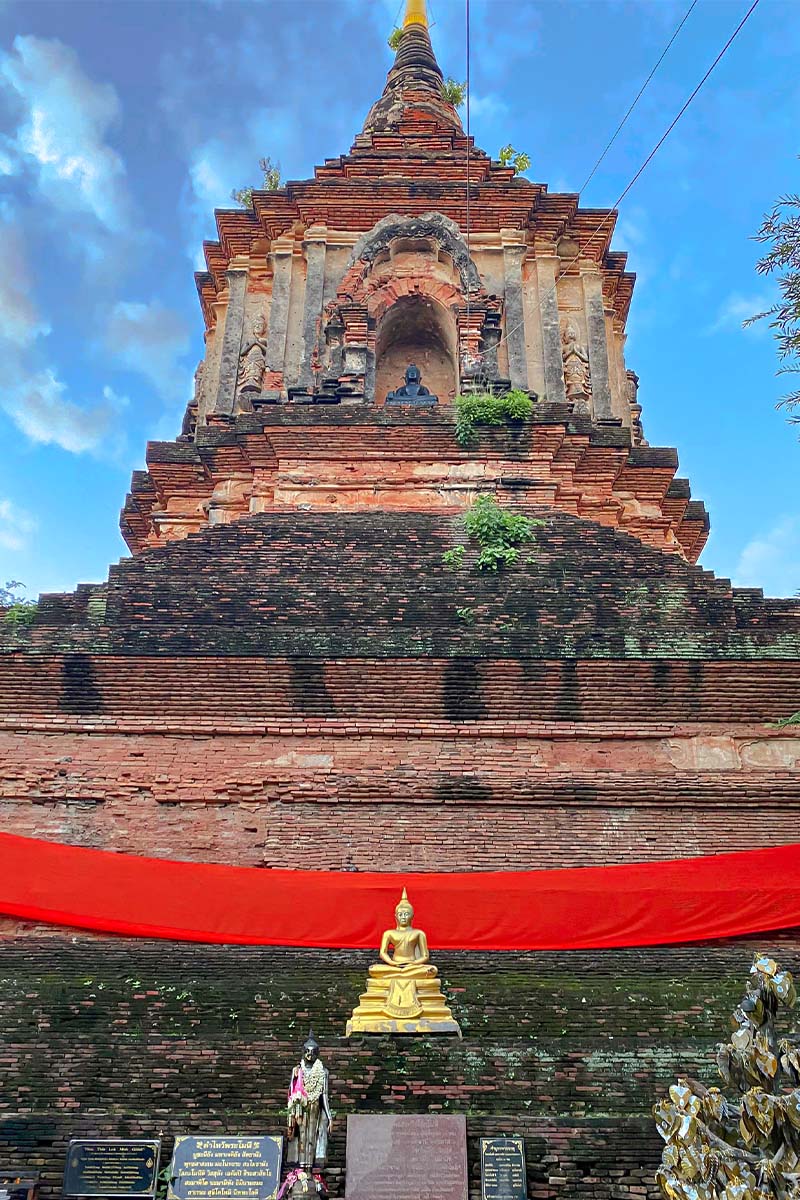 The huge bare brick chedi was built in 1527. It is the most impressive and sacred structure at a temple complex.

Drive south of Chiang Mai Old Town to Wulai Road, or the silver-making district of the city. The quiet road is dotted with silver shops and small local workshops waiting the night to come to transform into a busy walking street market on Saturday. At the end of the lane, lies one of the most unusual temples in northern Thailand, Wat Sri Suphan, or Silver temple. The silver-plated temple has an unusual look, compared to other temples in Thailand.

Built in 1502, Wat Sri Suphan is well decorated with every inch of the temple covered in silver, aluminum, and nickel to showcase the skills of Lanna silversmiths. Intricate patterns depict the Buddha’s life and the folklife of the Lanna people. According to an ancient belief, women aren’t allowed to enter the temple. It was built to honor the skillfulness of Lanna silversmiths A few walks from the temple, you find a silver workshop where local crafts work on their products. Ask them to learn to make a silver souvenir yourself.