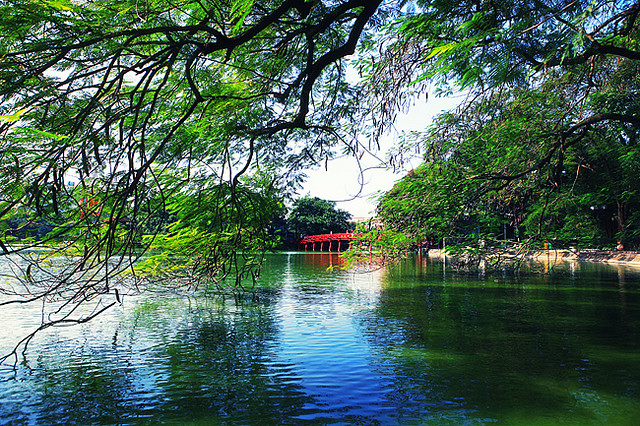 The Huc Bridge In The Past And At The Present

The Huc Bridge is not merely an ordinary wooden bridge but also like a bridge connecting the daily life with the spiritual life of the people in Hanoi. It leads to  Ngoc Son Temple which considered to be one of the most famous symbols in the capital of Vietnam. In the past  In 1865, under the reign of King Tu Duc, Nguyen Van Sieu, a famous poet in Hanoi, was responsible for building a bridge to connect Ngoc (Gem)  island to Dinh Tien Hoang Street today. He built Tran Ba Communal  House in the aim of preventing foreign culture and a nine-meter high stone tower  whose tip resembles a writing brush on Dinh Tien Hoang Street. The tower is called Thap But ( Pen Tower) to enhance learning. The bridge connecting the island to the shore was named The Huc ( the light is absorbed) by Nguyen Sieu. It consisted of 15 spans, 32 foot circular wood columns arranged in 16 pairs, plank floors and was painted in dark red color. As a living organism, The Huc Bridge has also experienced many ups and downs during 150 years since it was built.

After occupying Hanoi in 1882, Ngoc Son Temple became the residence of an officer in the French colonial army. And there was a young man named  Nguyễn Văn Minh (also known as Hải Minh ) burned the bridge in late winter 1887.After the bridge was burned by Ha Minh, in 1888 it was repaired and paved by wood  along the bridge to people to pray. On the eve of the Lunar New Year in 1952, the bridge collapsed because there were too people coming. Thankfully no one died in this accident. At that time, the Hanoi Mayor, Tham Hoang Tin, demolished the old bridge, building a new bridge. To have a beautiful design, he held a design contest and more than three dozen samples of both the French and Vietnam architects  participated. Finally, the design of Nguyen Ngoc Diem (1908-1999) was selected. Retaining the old rainbow arched shape, Nguyen Ngoc Diem designed it more curved to make it stronger and easier to be floated. He kept 16 pairs. However, pillar tips were sharp to remind Ngo Quyen victory on Bach Dang River. Horizontal and vertical beams were concreted to prolong its life. However, two sides of the bridge were still made of wood. At the present As its name, The Huc bridge connecting the shore to Ngoc island as the sun adorning the magnificent looks of Hoan Kiem Lake, is one of the most favorite attractions of domestic and foreign tourists whenever they come to the capital. 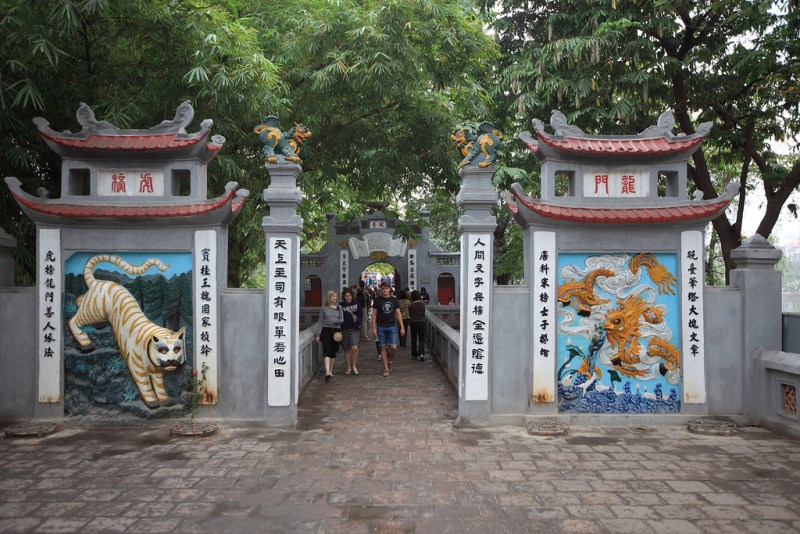 The Huc Bridge is a brilliant part of Ngoc Son temple relic. However, there are other architectural works equally impressive. For those living in the Old Quarter, Hoan Kiem Lake, The Huc Bridge, Ngoc Son Temple and Hoa Phong Tower seem to be a part of their house. They are familiar and close to everyone’s daily life.