A Guide To Burmese Cuisine

19 Feb, 2016 | Travel Blog
From the ultimate guides of each destination, secret beauties, amazing things about food and culture to top suggested resorts and hotels, our travel blog is meant to help you travel Asia at ease and experience the best moments there without any hesitation.

Thanks to its geographic location, Burmese cuisine possesses a little bit of everything from 3 of the best cuisines in the world. It is a perfect medley of the spiciness of India, the richness of China and the intricacy of Thailand. However, Burmese cuisine still has its own distinctiveness in its traditional dishes. Besides, the great diversity of ethnic minorities in Burma (now officially known as Myanmar) also attributes to the exuberance of its cuisine. With this guide to Burmese cuisine, we hope to give you an overview to this less-known culinary culture.

Myanmar is the world’s sixth-largest producer of rice. It is served in a variety of dishes just like in most Southeast Asian countries. While white rice is the most popular, there are also a number of variants such askauk hnyin, a kind of glutinous rice; nga cheik, purple rice often used as a breakfast dish and paw hsan hmwe, popular fragrant rice which was awarded the world’s best rice in 2011.

Most dishes in Myanmar use a much wider variety of ingredients than in China or India. Burmese cuisine is characterized by extensive use of vegetables and fruits. They are often used together in many dishes. Oils and onions are usually used at a large quantity. In fact, Myanmar is the highest per-capita consumer of onions in the world and here, the notion of being able to afford cooking oil along with rice and salt is considered a sign of wealth. Burmese people also eat all kinds of meats.

Originally coming from Shan state, lahpet is composed of fermented tea leaves, oil, salt, peas, peanuts, sliced lettuce, and chili. Thus it is often called the “tea leaf salad”. Served with rice and sometimes as appetizers or snacks, Lahpet is not only one of the most popular dishese in Burmese cuisine but it also plays a significant role in the culture of Myanmar. That is reflected in this famous expression: "A thee ma, thayet; a thar ma, wet; a ywet ma, lahpet". It means “Of all the fruit, the mango's the best; of all the meat, the pork's the best; and of all the leaves, lahpet's the best". However, excessive use of lahpet may cause insomnia just like tea leaves do. 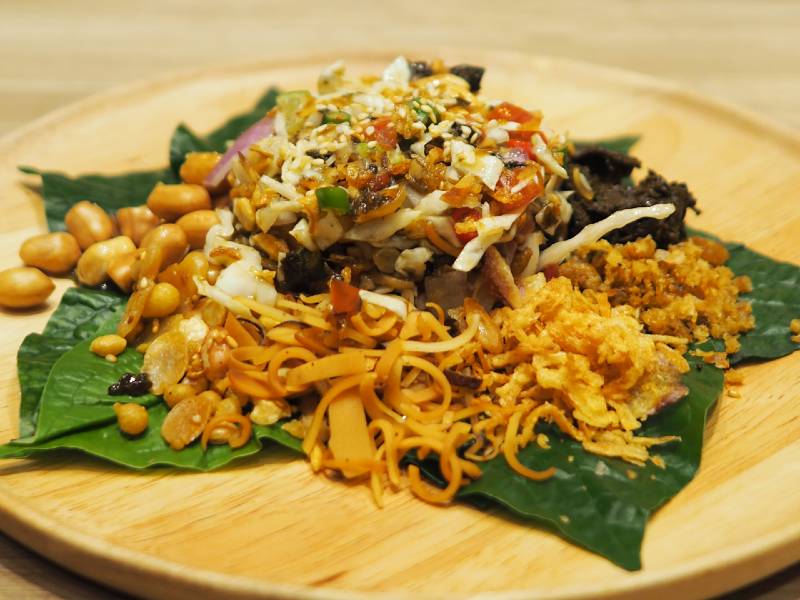 Despite being a demonstration of the influence of Indian and Thai cuisine, curry in Myanmar has its own identity. It is considerably spicier than curry in India and Thailand. It uses a large amount of onion but does not contain coconut milk. Curry in Myanmar is often served hot, accompanied with pork, beef, lamb or seafood. There is also an endless succession of following side dishes such as rice, soup, vegetables, tart salad, herbs, and a variety of dibs.

This thin flat rice noodle is dipped in a light broth with chunks of chicken or pork marinated with chili. Although considered a favorite across the country, it is most popular in Mandalay and the Shan State. The dish is quite simple, chilly yet comforting and delicious. There’s also a dry version with broth on the side. Shan noodles are sometimes used with pickled vegetables. And this is not the only noodle dish in this guide to Burmese cuisine. 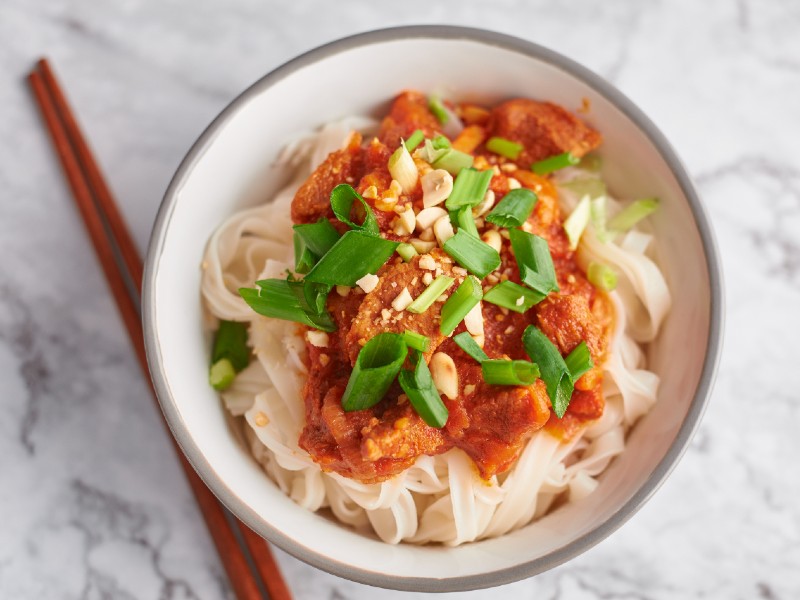 Unlike the Shan noodles, Nangyi Thoke is a form of thick and round rice noodles. Some even called it the Burmese spaghetti. However, it doesn’t go with tomato sauce and minced beef. Nangyi Thoke is served with bean sprouts, slices of boiled egg and last but not least, chicken sauce. Sometimes, they are eaten as side dishes. The dish is often garnished with roasted chicken flour, sliced onions, chili oil, and lime.

Did you notice the difference between the Shan noodles and the Nangyi Thoke?

Deep-fried foods in Myanmar are examples of the extensive use of oils like in China. They can be easily found on the street or in tea shops. Many things can be deep-fried such as samosas, spring rolls, or even bread and sweets. They are eaten as snacks, often served with lots of different dips. While wandering in Yangon, you will surely encounter some deep-fried stuff on the streets. 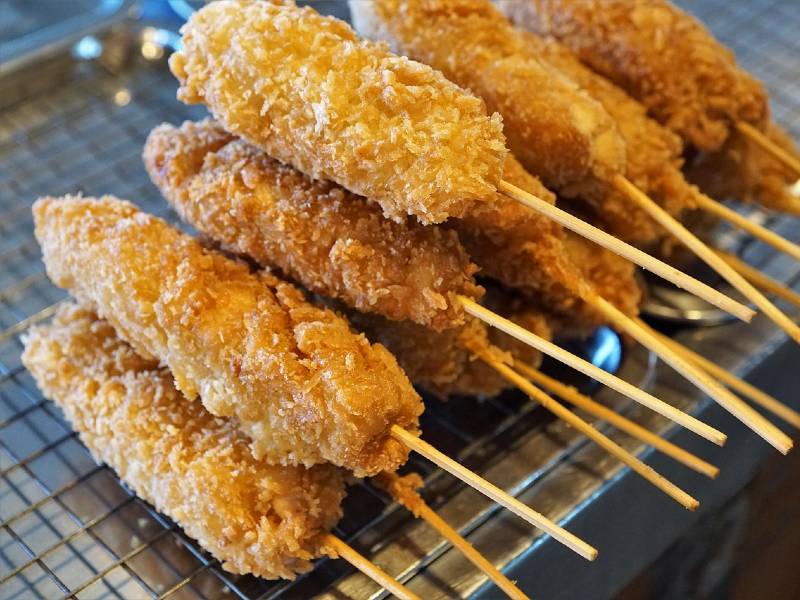 (Photo by photosforyou from Unsplash)

A simple answer: The tea shop. While Myanmar has seen an increasing number of fine restaurants scattered over popular tourist spots, a meal in a tea shop will introduce the Burmese cuisine to you. Tea shops also represent the ethnicity of their owner. A Burmese-owned shop promises a lot of different traditional Burmese noodles and rice dishes. An Indian one has more deep-fried snacks in its menus such as samosas and poori (a kind of deep-fried bread eaten with potato curry). And a tea shop owned by Chinese tends to offer baked sweets, steamed buns, and sometimes dim sum.

People in Myanmar sit on the ground or bamboo mat to eat. The meal is placed on a low and round table to ensure that everyone feels comfortable while reaching for the foods. Foods are served simultaneously, not continuously. When everyone is ready, diners can take food into their bowl by their own right hand. Chopsticks and spoons can be also used for convenience and sometimes for their left hand to be clear The eldest ones will take the curry first. The curry is eaten together with rice, not separately. A large bowl of the light broth should be shared by everyone and can be taken at any time. After the meal, green tea is the beverage of choice.

A last piece of advice in our guide to Burmese cuisine: to enjoy the real culinary experience of Burma, you should spend one day eating at a local house. At Exotic Voyages, we can give you a cooking class with a local in Bagan, so if you’re planning for a Myanmar trip, contact us for more details. 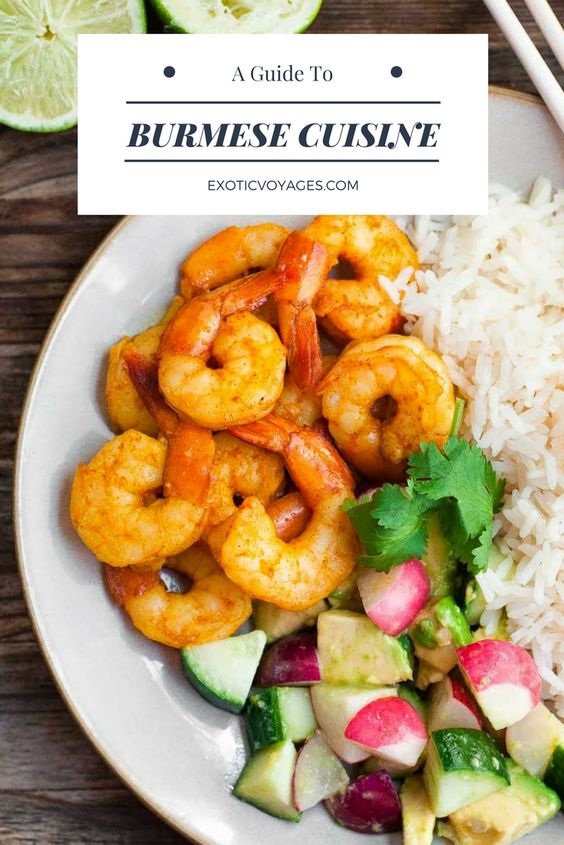