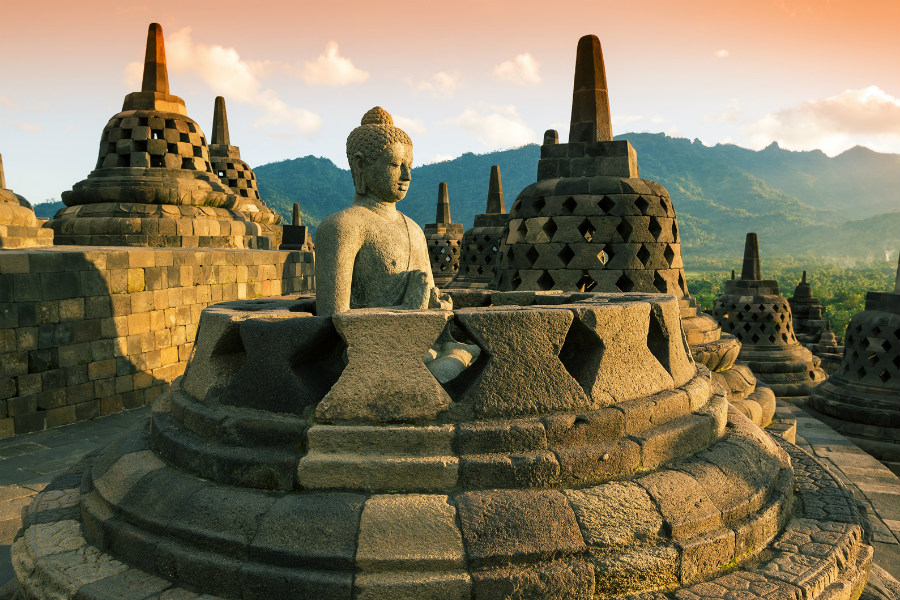 From the pristine rainforests to the charming rice terraces, million-year-old hominid fossils to real-life dragons, Indonesia captures every visitor’s minds for its rich nature and long history.

A few temples in this world are as majestic as the Borobudur Temple Compounds. Experts suggested that they were built within 8th to 9th centuries, during the Shailendra dynasty, to form a sacred unity. The temple compounds consist of three Buddhist temples (Borobudur, Mendut, and Pawon) in Central Java. The most beautiful temple is the Borobudur temple. It was forgotten and hidden beneath volcanic ash and jungle for centuries until 1814 when a British ruler was aware of its existence from some native Indonesians and decided to search for it. In 1973, UNESCO came up with a restoration plan for the legendary temple. This plan took seven years to complete.  Today, we can see 504 stone statues of the Buddha standing on Borobudur, but none of them can tell us why this temple was buried in oblivion.

Experts suggested the Borobudur Temple Compounds were built within 8th to 9th centuries, in the Central Java, Indonesia 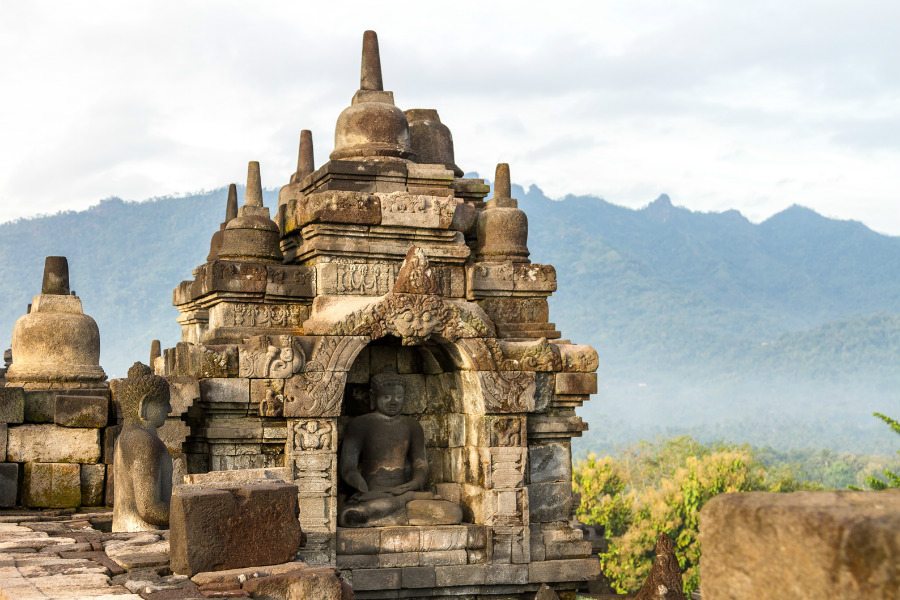 It is one of the greatest Buddhist monuments in the world with more than 500 Buddha statues are perched around the temple. 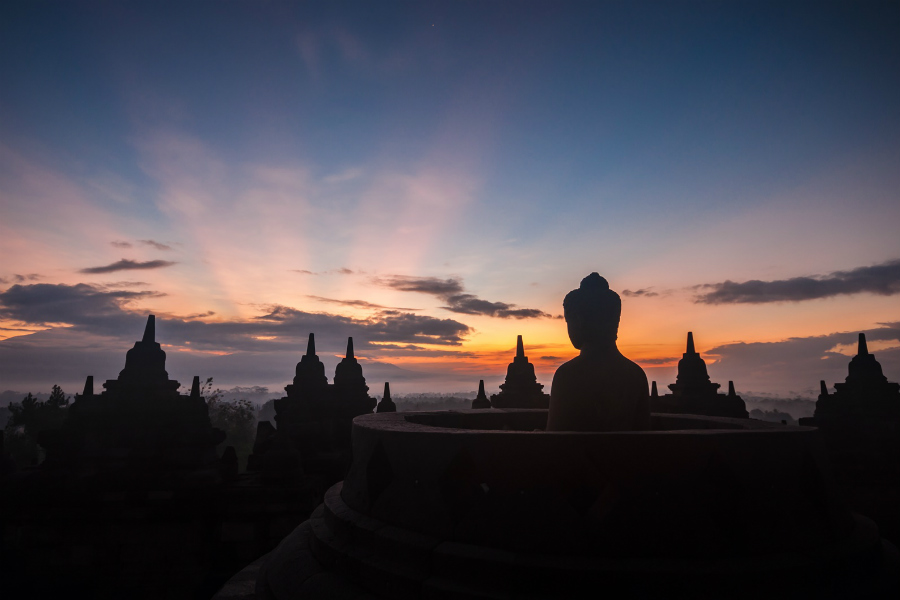 Two million stones from local rivers and streams were fitted tightly together without the aid of mortar to create a 95-foot-high step pyramid.

2. Cultural Landscape of Bali Province: the Subak System as a Manifestation of the Tri Hita Karana Philosophy

Every traveler visiting Bali comes to visit the Tegalalang rice terraces. But few people know, more than just beautiful, the rice terraces are a crucial part of the Cultural Landscape which has been listed as a UNESCO World Heritage Site since 2012. This thousand-year-old Subak system showcases the Balinese philosophical principle of Tri Hita Karana and promotes a harmonious relationship between God, human being, and nature. The property consists of five important sites including Water Temple Pura Ulun Danu Batur,  Lake Batur, Subak Landscape of Pakerisan Watershed, Subak Landscape of Catur Angga Batukaru, and Royal Water Temple Pura Taman Ayun. These rice terraces, lake, and water temples have together shaped the landscape over the past thousand years and provided a unique method to support a dense population on the volcanic island. Among about 1,200 water collectives, this landscape is considered the fullest expansion of the Subak system of the Balinese Kingdom in the 19th century. 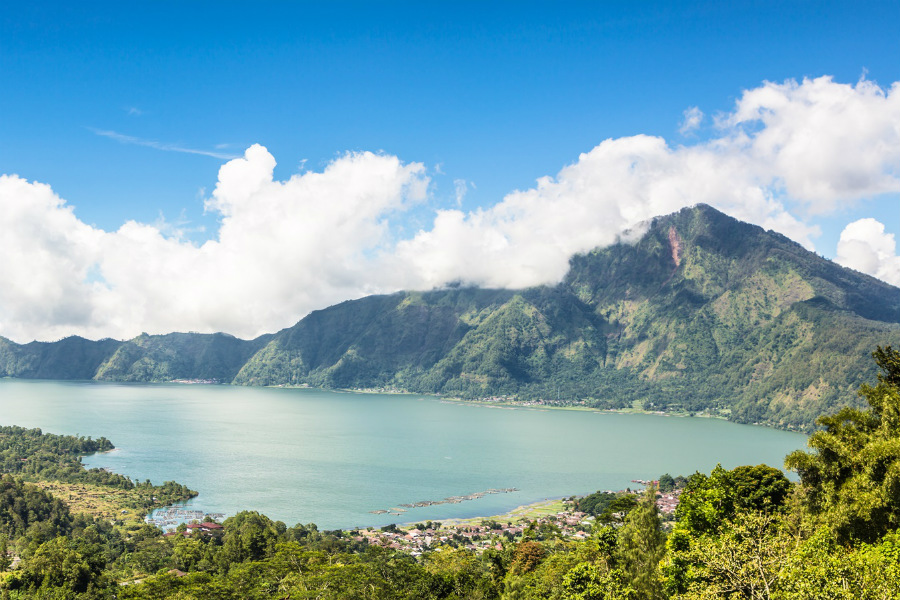 Lake Batur is a crater lake in Bali. It's one of five important sites of the thousand-year-old Subak system. Royal Water Temple Pura Taman Ayun was the main temple of the Mengwi Kingdom. It was built in the 17th century... 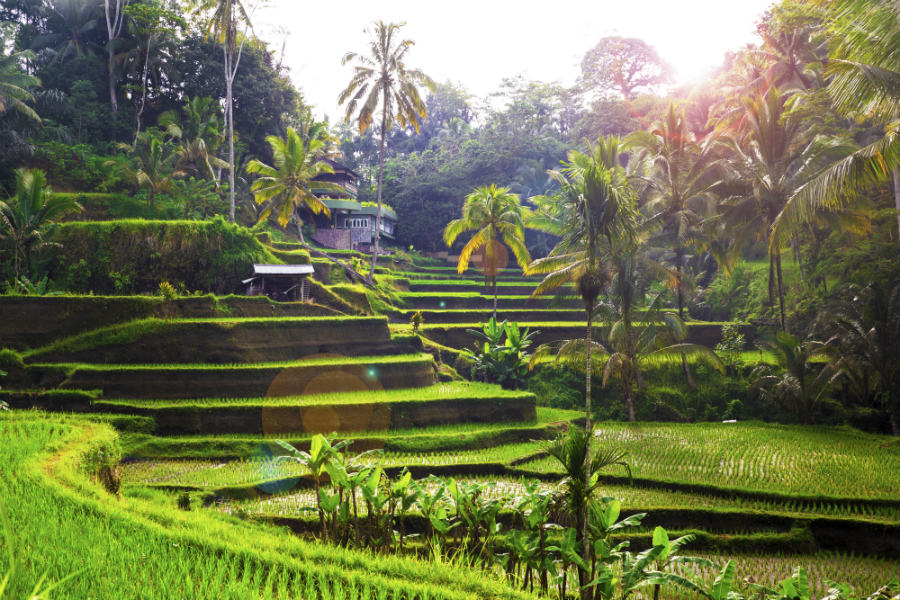 Want to see a real dragon? Head to the Komodo National Park within the Lesser Sunda Islands, Indonesia. This UNESCO Heritage Site has its name from its unique residents on the island: the Komodo dragons. There are no fewer than 2,500 Komodos that make this area their habitat where they share with wild buffalo, deer, snakes, monkeys, various types of birds, and other wildlife. This National Park is home to not only the real-life-dragons but also one of the only seven beaches in the world with the unique pink sand. Hide below the surface of the blue water is a thick carpet of beautiful corals and abundant diversity of marine life, a true paradise for photography lovers. 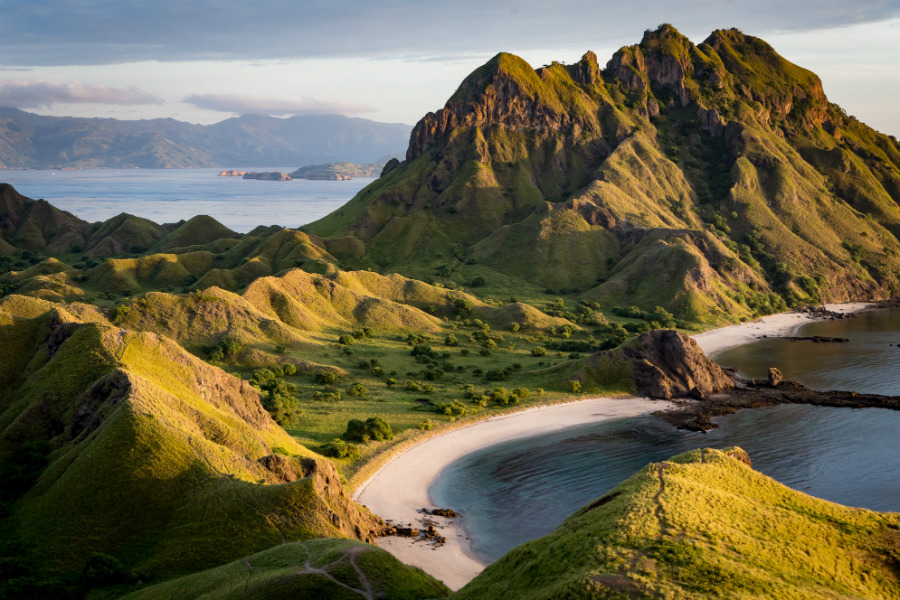 Komodo National Park includes the three larger islands Komodo, Padar and Rinca, and 26 smaller ones. It was declared a UNESCO World Heritage Site in 1991 The national park was founded in 1980. It protects the Komodo dragon, the world's largest lizard... ... and one of the only seven beaches in the world with the unique pink sand.

Lorentz National Park is the largest protected area and the most complete ecosystem for biodiversity in Southeast Asia. Home to more than 630 species of birds and 123 species of mammals Lorentz National Park’s high biological diversity is a result of the spectacular natural landscape and impressive cultural diversity. Different tribal groups in the park are believed to go back 25,000 years. They are still living and maintaining their thousand-year-old traditional lifestyles in the lowland rivers and swam areas. A colorful bird of paradise in the park A thatched-roof house of a Dani tribe. They are some the “most decorative” tribes in the West Papua, Indonesia.

Prambanan Temple Compounds were built during the heyday of the powerful Sailendra dynasty in the 10th century. This World Heritage site is considered as one of the most beautiful Hindu temple complex in the world and the largest one in Indonesia dedicated to Shiva. The area had suffered from some natural disasters. The most devastating disaster it has been experienced was the earthquake and volcanic eruption in the 11th century. The temple compounds collapsed, but they were rediscovered and restored with great care to retain the authenticity of the structure. Now, Prambanan Temple Compounds is not only a Heritage Site of the world but also an architectural and cultural treasure of Indonesia. 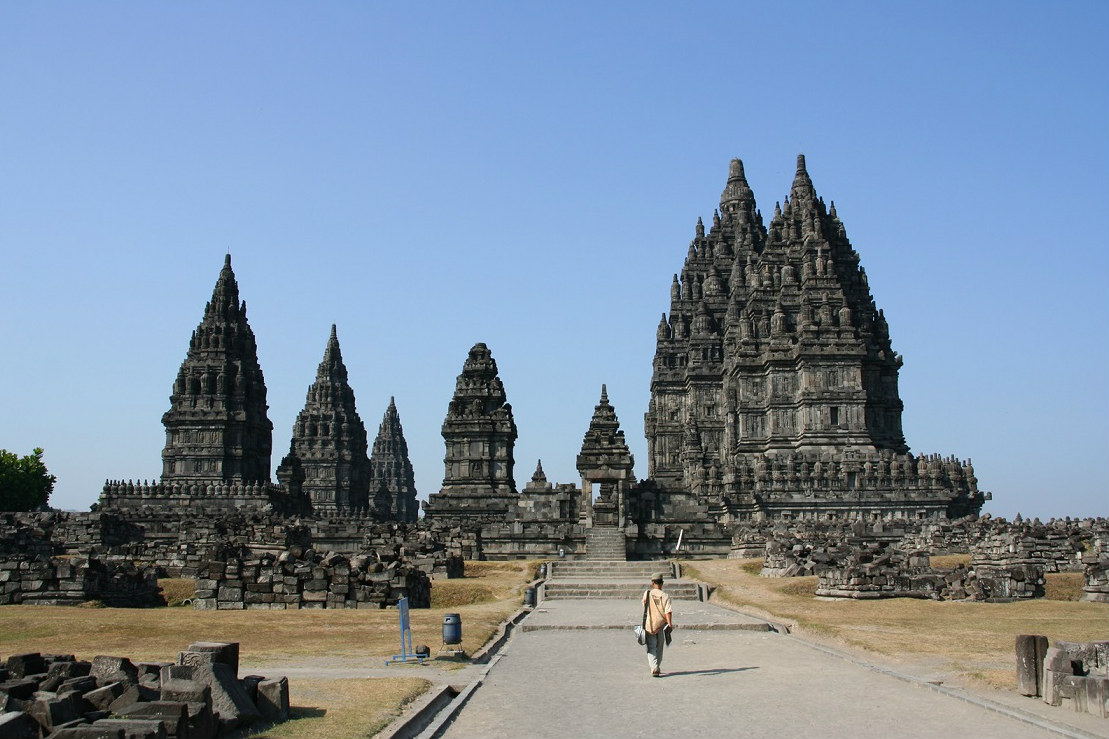 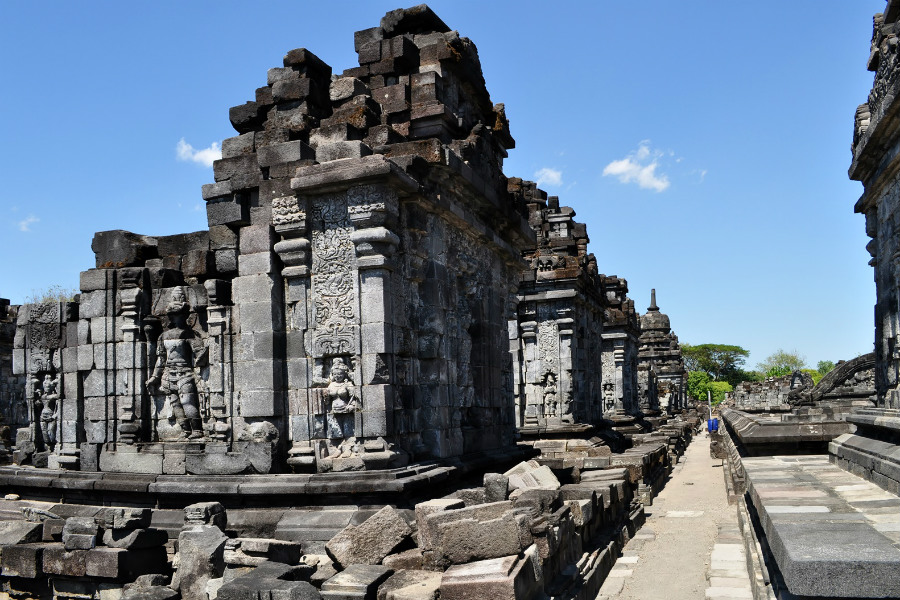 The area had suffered from the earthquake and volcanic eruptions 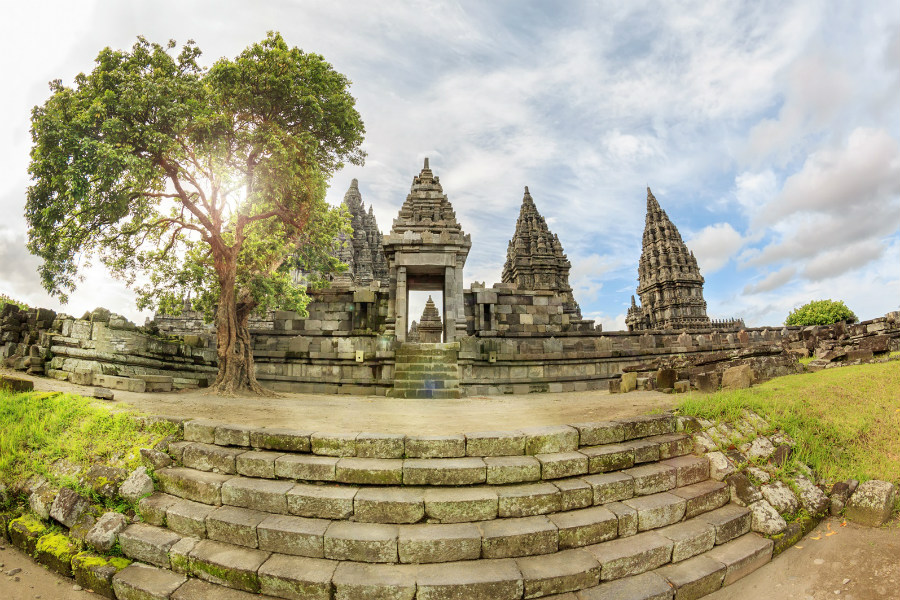 Prambanan Temple Compounds is one of the most attractions in Indonesia.

Put this important site on your list if you are an archaeological lover. Sangiran Early Man Site preserves 50 fossils of Meganthropus palaeojavanicus (Ancient Java’s Great Human) which are now attributed to the Homo erectus that lived from 1.9 million years to 300,000 years ago. Even though 50 doesn't sound like an impressive number, this is half of the world’s known hominid fossils. And these Javan fossils are believed to be the missing link of Charles Darwin's Evolution Theory. For trekking and animal lovers, Tropical Rainforest Heritage of Sumatra is a must. Including three national parks: Gunung Leuser National Park, Kerinci Seblat National Park, and Bukit Barisan Selatan National Park, this site attracts travelers with the lure of its beautiful nature and a wide range of wildlife. It is home to an estimated 10,000 plant species, 580 bird species, and more than 200 mammal species. Of the mammal species, the most well-known one is the red-haired Sumatran orangutan that is easy to sport when you hike in the jungles. 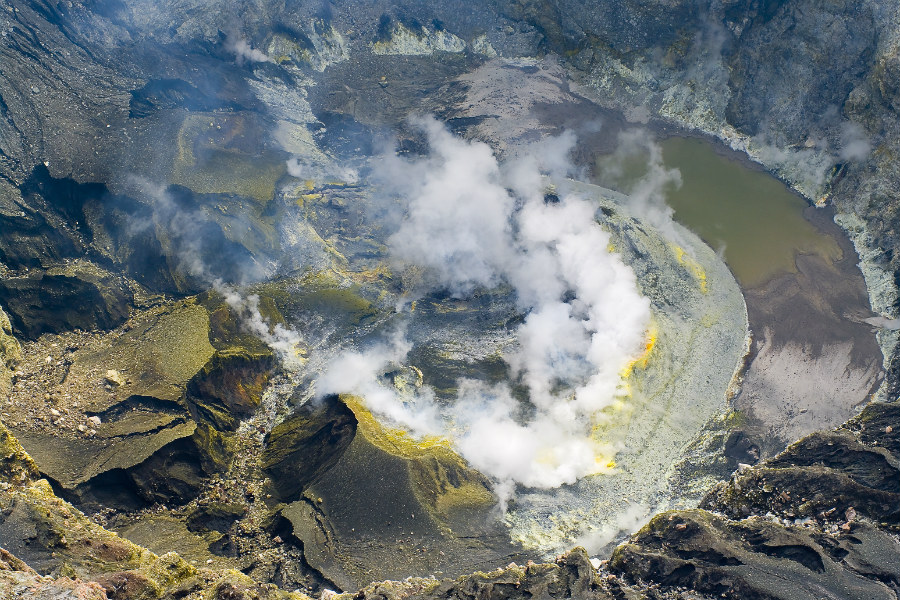 Tropical Rainforest Heritage of Sumatra is famous for its beautiful nature and a wide range of wildlife (Photo: Volcano Kerinci in the Kerinci Seblat National Park, Sumatra) Sumatran orangutan - the most well-known one resident Rafflesia Flower - the largest flower in the world

If nature is what you are after, this park is very much worth a visit. It contains the largest remaining area of lowland rainforests in the Java plain that is home to several species of endangered plants and animals including the Javan Rhinos. With only 60 individuals remaining, this extraordinary creature is rare to spot. But there are still many other species of birds, reptiles, and mammals to trace once you are there. Besides the prime rainforest and untouched wilderness, Ujung Kulon National Park has its fame of beautiful rivers, pristine beaches and vibrant coral reefs making it one of the best places in Indonesia for swimming, snorkeling, and padding. Ujung Kulon National Park is in the extreme south-western tip of Java plain. It contains white beach paradise islands that are untouched by humans. The park is home to several species of endangered plants and animals (Photo: two Javan rhinoceros, an endangered and protected animal in Ujung Kulon, Indonesia)