01 Jul, 2021 | Travel Blog
From the ultimate guides of each destination, secret beauties, amazing things about food and culture to top suggested resorts and hotels, our travel blog is meant to help you travel Asia at ease and experience the best moments there without any hesitation.

Hanoi, the capital city of Vietnam, has so many things to do. You can choose to stroll along narrow alleys of the Old Quarter to discover hundreds of small shops and food; You can see the colonial buildings that are many in the city; you can watch an extraordinary traditional puppet show, visit the local markets where fresh vegetable and meat are sold for morning shopping; or you can join a cooking class to find out the secret of Vietnam cooking art. But don’t forget to spend a day trip out of the city to visit some craft villages or Duong Lam - the oldest village in Vietnam.

There are so many things that attract visitors to this rural countryside. Here are a few reasons:

- Duong Lam Ancient Village is the homeland of two Vietnamese Kings: Phung Hung (761-802) and Ngo Quyen (896-944) giving the village its prestige and pride.

- Duong Lam Ancient Village is one of a few villages that still retains the authentic vibe and architecture of an ancient Vietnamese village with hundreds-years-old village gate, banyan trees, wells, communal houses, and red brick alleys.

- Duong Lam has hundreds of ancient houses. Many of them are dated back to the 17th century while the area was settled as early as 1,200 years ago. It was declared National Heritage in 2006. This helps to draw a lot of visitors to the village but also causes conflict between conservation and progression that I will mention below.

- There are ancient houses that people are still living in. You can get in to see the beautiful architecture and feel the unique ambiance.

- The village has many small alleys that are quiet and beautiful that not easy to see in the northern villages nowadays.

How to get to Duong Lam from Hanoi?

Duong Lam village is located 40 kilometers northwest from Hanoi. From the center, you can get a bus, taxi, or a private car to the village in 1.5 hours. The road is easy and traffic isn’t too heavy. You can stop at Tay Son Old Fortress - a miniature version of Imperial Citadel of Hue - on the way as this fortress is only 10 minutes far from the village. You can also combine Duong Lam with Ba Vi National Park which is just 30 minutes west. 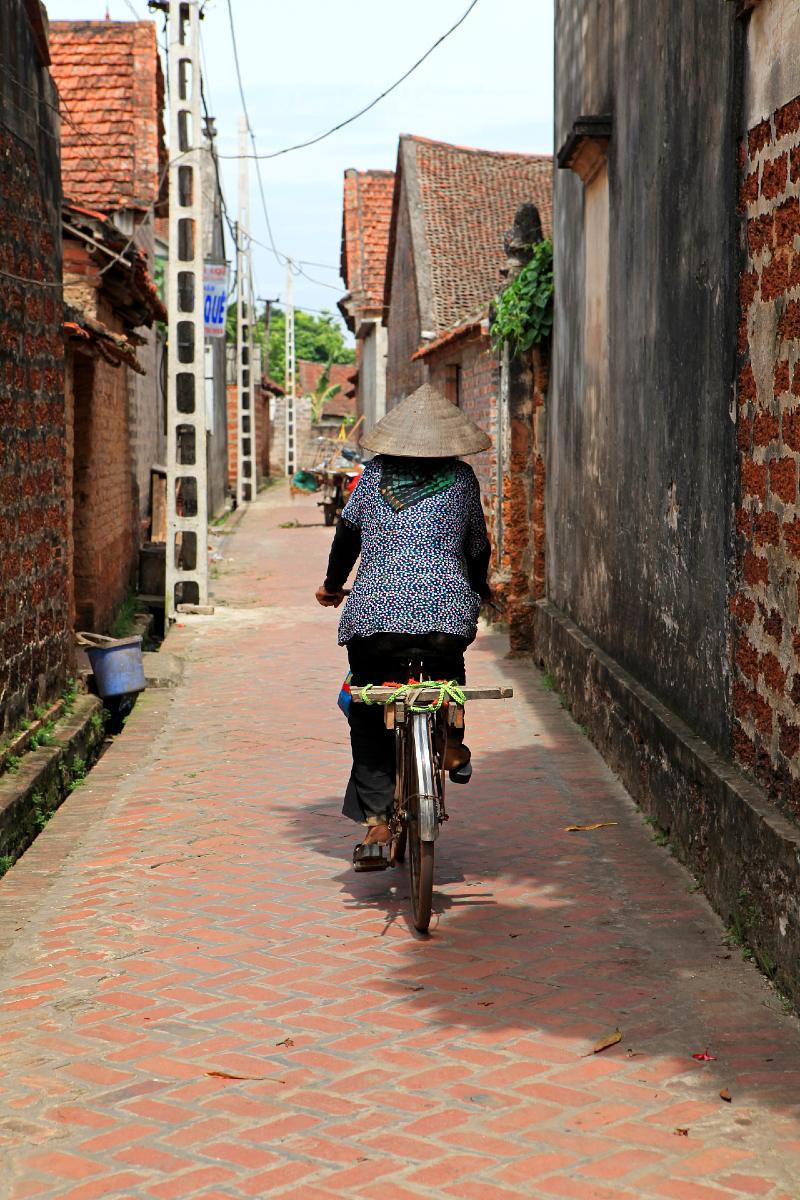 A woman is cycling in the narrow alley of Duong Lam. Both sides are ancient walls built by red laterite bricks.

“The King’s authorities stop at the village’s gate”

The Mong Phu village gate is the main entrance to Duong Lam and the only old gate that exists until now. It was built in 1533, separating the village into two parts. Inside is where the people live. Outside are paddy green fields and the village’s cemetery where the dead left their bodies staying forever with the motherland. There is a big banyan tree on the left and lotus pond on the right. Villagers often sit under the shadow of the old tree to enjoy summer breezes while having a talk with each other. 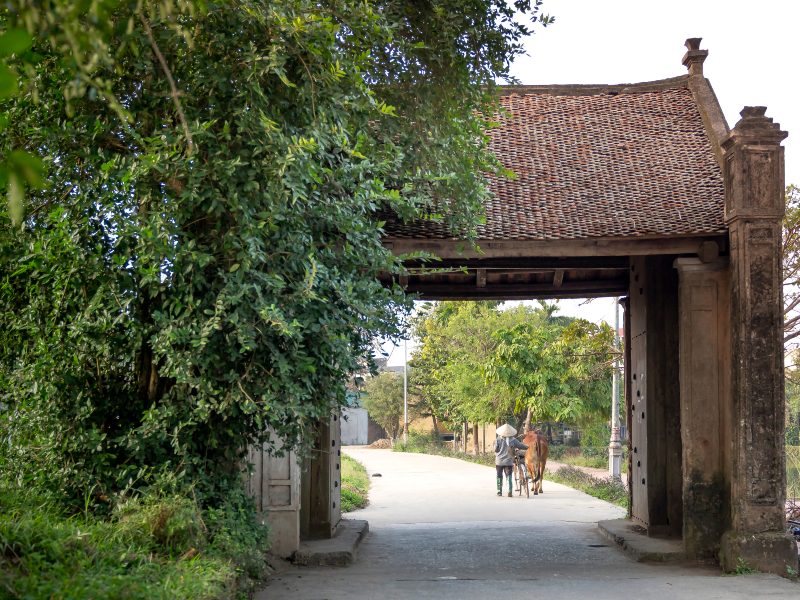 The Mong Phu village gate is the main entrance to Duong Lam and the only old gate that exists until now. It was built in 1533, still remains ancient architecture.

The old saying “The King’s authorities stop at the village’s gate” describes so well the unwritten rules of Vietnamese villages since the old time. Each community was considered an extended family, where every member was connected to the others by familial ties and was expected to act according to the ascribed roles of their ranks in the family. It means you might have to call a 5-year-old boy your “uncle” if he is a son of your grandma’s sister.

Personal pronouns for people who have no blood ties in the Vietnamese language are also based on this idea of an extended family. The principle is like this: a middle-aged man can be called by a stranger as a brother, uncle, or grandpa depending on how different their ages are. “How old are you” is, therefore, one of the first questions Vietnamese folks ask each other when they meet to determine the right greeting.

What to see in Duong Lam Village?

“Park your motorbike under the banyan tree over there, sit down and have a cup of Voi, it will cool you down!” An old woman talked to us with her unique Duong Lam’s accent. She was wearing the same black trousers and a dark brown shirt that my grandmother used to wear when she was alive. “How old are you?” she asked when inviting us to sit on a bamboo bench next to a low table that displayed many snacks for sale. “If you are looking for somebody, you can ask me, I know them all!”, she continued while fanning us with a paper fan. 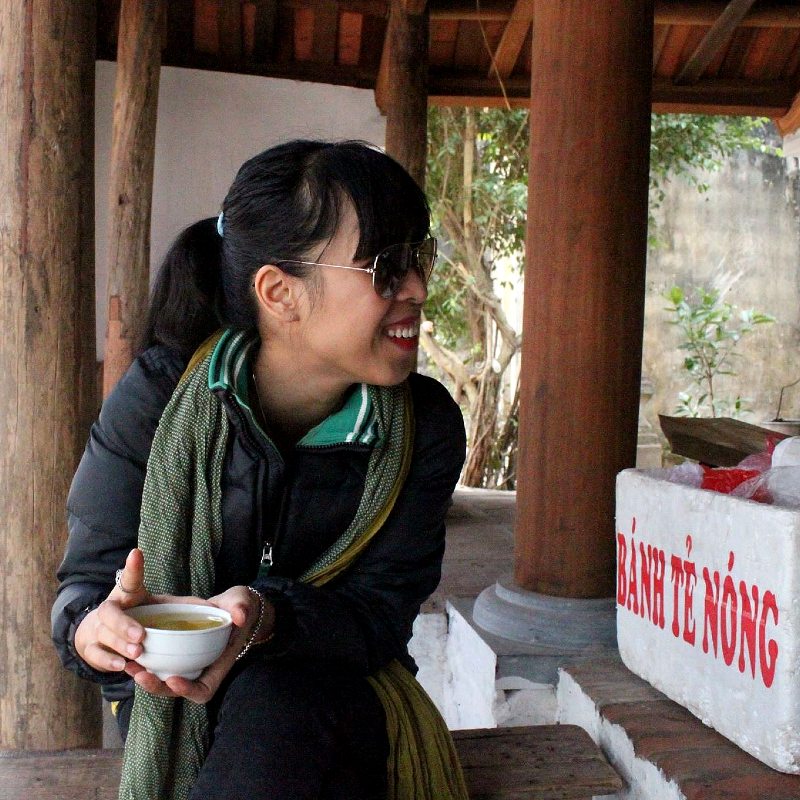 I was enjoying a bowl of green tea while having a talk with the old lovely woman.

I tasted a small piece of Che Lam - a local white chewy candy that is stuffed with roasted peanuts and enjoyed its light ginger aroma before talking to the lovely woman. She told me to start with Đình Mong Phu (Communal House). There are five communal houses in Duong Lam, each one dedicated to an important figure in the village’s history, but the most significant is Đình Mong Phu. As other Đình in northern Vietnamese villages, Đình Mong Phu is a symbol of the village’s power. It is a big building with curved tiled roofs, beautifully decorated inside with sculptures and engraving. It’s used to worship mountain god Tan Vien - one of four immortals gods in Vietnamese belief. A big yard in the ground of Đình paving with red brick is the place where the village gathers for important events, a feast, or festivals. 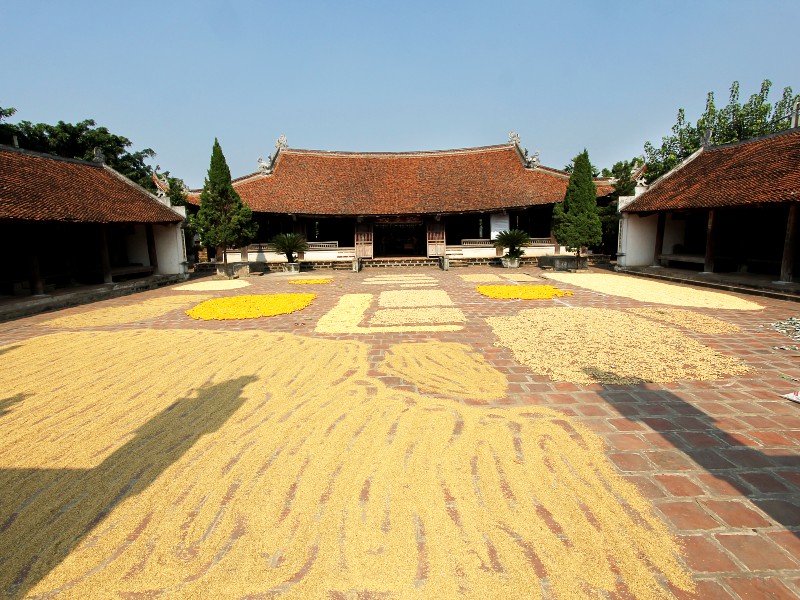 Villagers often bring their crops to dry on the courtyard of the Village Communal House.

Just a short walk from there, we saw the village market. Like in most Vietnamese local markets, many sellers were squatting, while others were standing behind their simple stalls. You’ll find a lot of local fruit and vegetables that are grown in the seller’s gardens. Tomatoes, spinach, bitter gourds, chilies, guavas, jack fruits, and other Vietnamese staples depend on the season. The market is held daily, right in front of Chua Mia (Mia Pagoda) that is dated back to the 17th century and famed for a set of old 287 Buddhist statues. 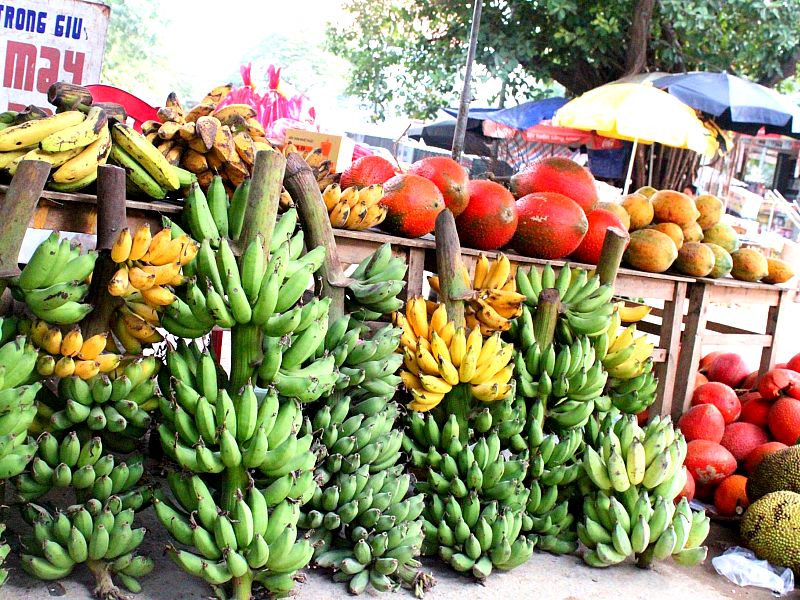 There are many kinds of fruits selling in the market. Most of them are fresh fruits that villagers pick from their gardens. 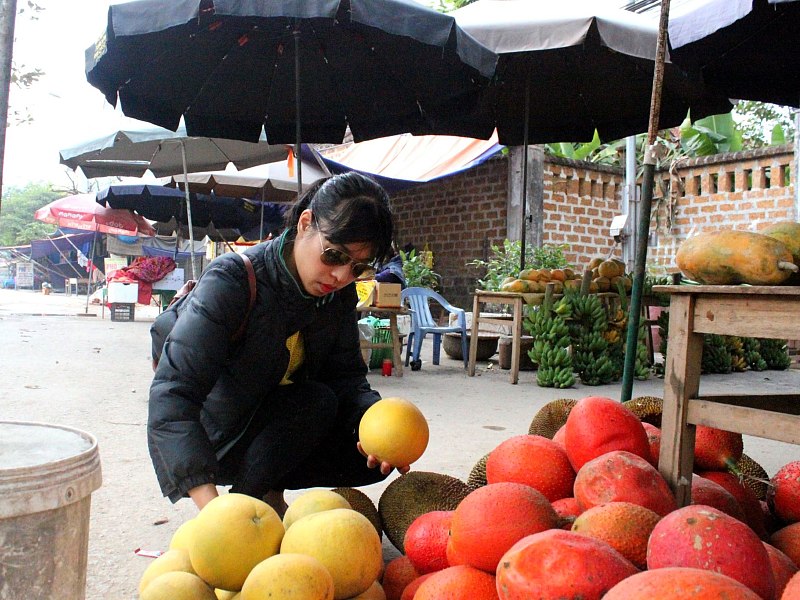 My trip was in January. It was about the Tet Holiday (New Year Festival in Vietnam). Grapefruits and Gấc (the red fruits in the photo) are must-buy fruits in Tet of Vietnamese. They display grapefruit on the alter and use Gấc to cook special red sticky rice to worship ancestors.

There are more than 900 houses in Duong Lam in which many of them date back to the 17th and 18th centuries. To identify, look for those that have signposts “Nhà Cổ” (Antique House). They are beautiful with red laterite bricks for the walls, wooden doors, curved roofs, and lovely, clean front courtyards used to keep huge clay jars of Tương (Vietnamese soy sauce). Aside from the preserved houses with signposts, there are a lot of houses that are 100 to 200 years old and they are just as beautiful. 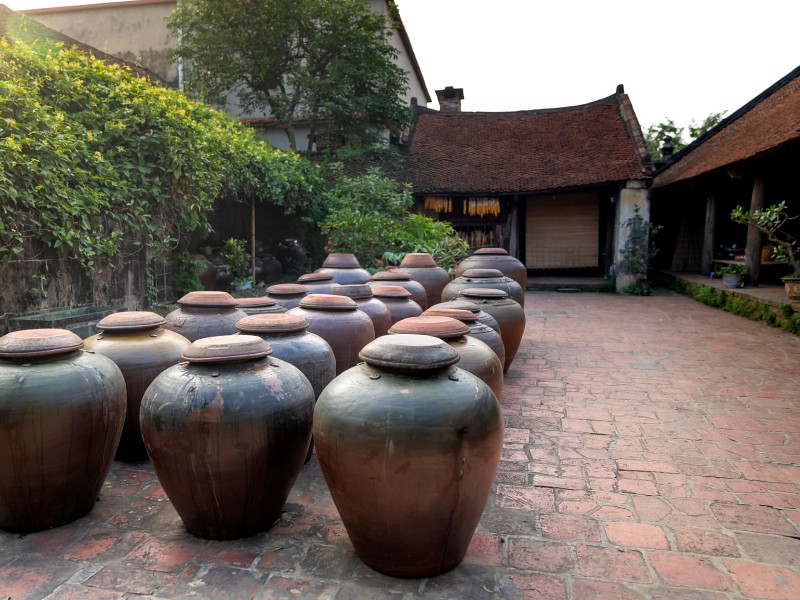 Huge jars of Tuong in the courtyard of an ancient house

But as I mentioned before, since Duong Lam has been declared as national heritage, there are restricted rules on preservation and restoration. That means, to innovate their properties, the owners need the permission of what could do and couldn’t do. Many applications were refused because of fear that renovation would spoil the look and feel of the village. And families will have to continue to live in a small space while the number of people gets bigger after years.

Getting back to the village gate and sitting under the big tree, I watched in peace 2 water buffaloes grazing the grass. A little further away, outside of the gate, green hills covered with eucalyptus trees added relief to the landscape. This visit had something that I didn’t expect. No fancy houses, no massive architecture, everything in Duong Lam is just quaint, quiet, and enough in size but everyone can find in it something a special feeling to their soul. Probably, this “simplicity” is the very essence of Duong Lam’s charm, as it represents so well, the spirit of rural Vietnam as it truly is.