10 Vietnamese Noodle Dishes That Will Make You Entirely Forget Pho

Vietnam is home to breathtaking natural landscapes, thousand-year history, diverse culture, and colorful indigenous tradition. But what you see on the way is only half of its story, there's a world of wonders that are best experienced through taste, not the mention what is considered as one of the best street food in the world.

When it comes to food, most of us immediately think of Pho - the aromatic beef noodle soup that is widely considered to be Vietnam’s national dish. A few people know that Vietnam has many kinds of noodles tasting as good as Pho that local loves to have them every day. They come in different variants depending on the regions but the broth’s recipes are always kept the same.

Scroll down to find out 10 noodles that you can skip Pho to try them in your next visit to Vietnam.

You can also explore a lot more of Vietnamese cuisine on our delicious Vietnam Food Tour. 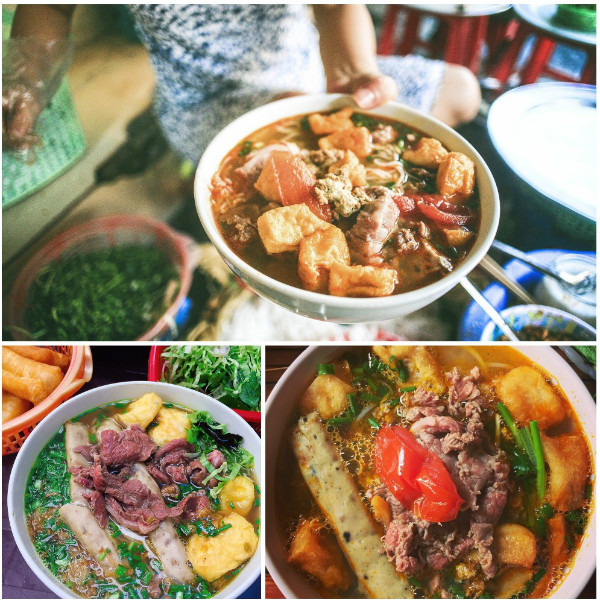 Bun Rieu stands out from other noodles by its crimson color. The broth gets its appearance from tomato paste and annatto oil. The distinctive flavor comes from freshwater paddy crabmeat that is like a soft tofu texture. Rice vinegar gives the broth a lovely sourness while small pieces of fried tofu contribute crunch. Depending on your order, Bun Rieu might come topped with beef, pork, Vietnamese sausages, and snails. Add a squeeze of lime juice,  a small teaspoon of shrimp paste, chili sauce, banana blossoms, and herbs, and you have a perfect meal. 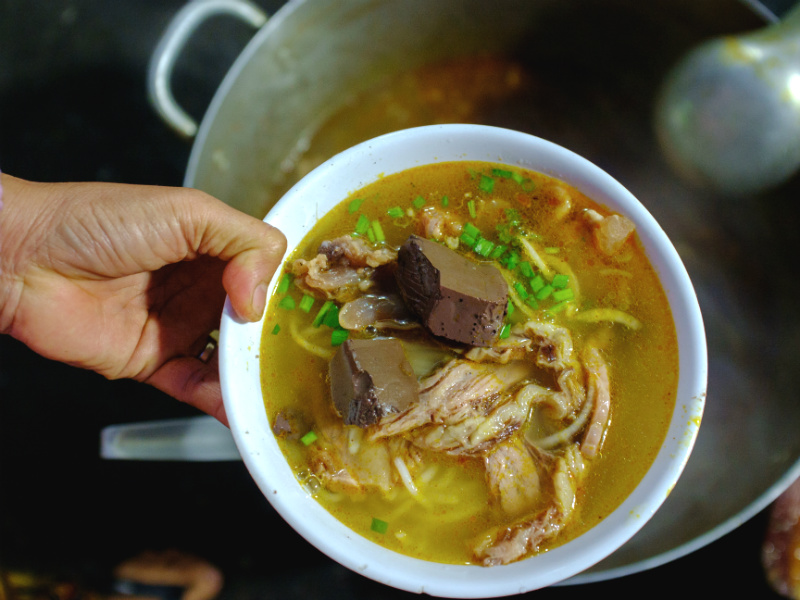 Bun Bo Hue originated in Hue, the former capital of Vietnam, but you don’t have to go to Hue to enjoy it. This delicious noodle which its broth’s flavor is dominated by lemongrass has become popular in the rest of the country.

The broth, after long hour simmering beef bones and seasoning with shrimp paste, sugar and spicy chili oil for taste, is poured over the noodles and topped with thin slices of beef shank, a piece of pig’s knuckles, cubes of congealed pig blood, and crab sausage which is light, not salty and fishy. Bun Bo Hue is often served with mint leaves and homemade chili paste. Sip the broth and you might realize that it is the best noodle you have so far. 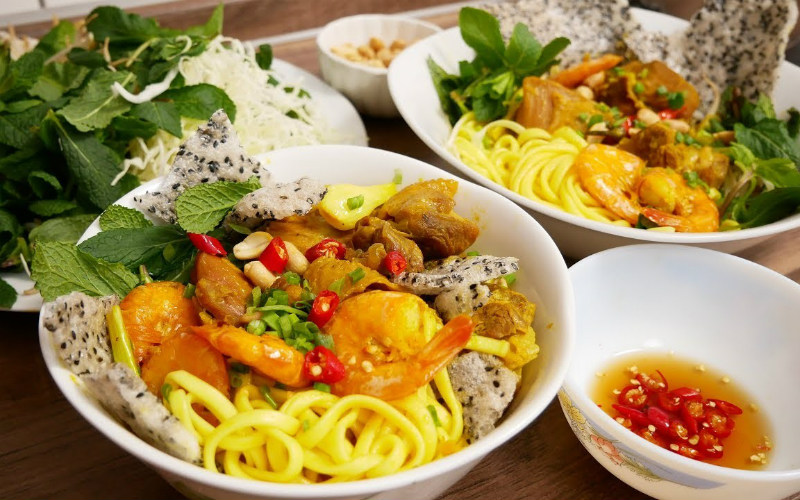 My Quang originated from Quang Nam Province in central Vietnam. It is one of the most recognized foods because of its yellowish rice noodles which comes from turmeric. Noodles are served as a bed for shrimp, grilled pork, peanuts, hard-boiled quail eggs, fishy heartleaf, bitter knotgrass, and some other herbs. A strongly flavored broth is drizzled on top, just enough to partially cover the greens, along with a squeeze of lime juice and a roasted rice paper to crumble. The colorful layers of ingredients promise a joyful meal to eaters. You can’t go wrong for this bowl of pure deliciousness. It’s extremely tasty in a very simple recipe. Stir-fried quickly over high heat, a mountain of beef sits atop cool noodles accompanied by fresh herbs. The beef is smoky and tender. The fish sauce is slightly sour and sweet. Crunchy peanuts and bean sprouts add texture to the dish while crispy dried shallots create aroma making every mouthful amazing. With a lot of greens, Bun Bo Nam Bo is really good for your health. 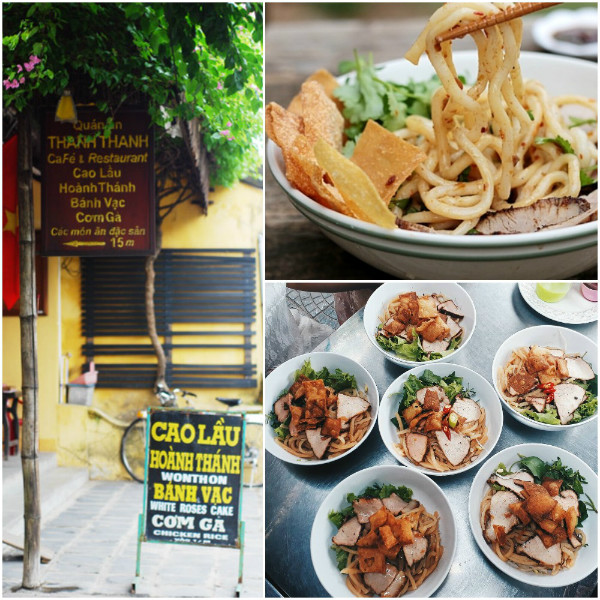 Looks quite similar to Mi Quang, Cao Lau is another specialty of Quang Nam. It consists of thin slices of char siu pork, crispy wonton crackers, and a number of local fresh herbs on a bed of chewy, grayish-brown noodles. A small amount of broth is poured over just to wet the noodles. Mix all the ingredients together with lime juice and homemade chili paste to have the best taste. Right at the first bite, you will find a meeting between a Chinese touch with Vietnamese cuisine in a bowl. 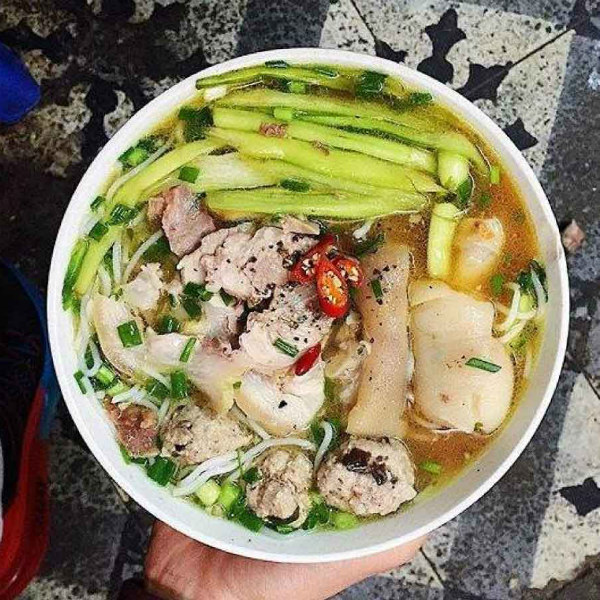 Bun Suon is one of the most favorite dishes when it comes to breakfast and lunch in Hanoi. Pork ribs are simmered with some slices of turmeric until the ribs are soft and the broth is sweet and has a very light yellow color. A bowl of Bun Suon often includes 4 or 5 pieces of ribs, a piece of pig’s knuckles, sliced pork meat, some meatballs which are made from minced pork and mushroom, and a handful of sliced elephant ear stalk. Lime juice, fish sauce, and chili paste help to add more favor to the dish. 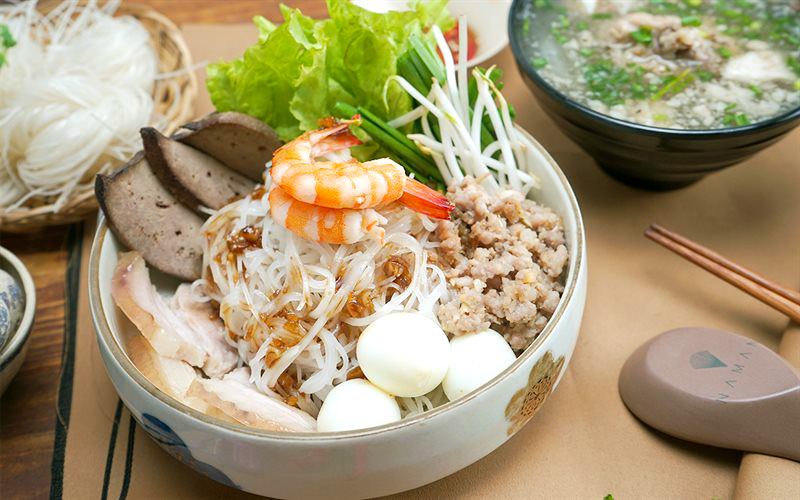 Hu Tieu is a favorite breakfast and dinner in Saigon. It’s easy to find Hu Tieu in every corner of the city. From market stalls, roadside vendors, and restaurants, this simple dish is as popular as Pho in Hanoi. The seller immerses the noodles in boiling water quickly, places them into a bowl then fills it with clear, soothing broth which is made from pork bone, dried squid, sugar, and fish sauce. Hu Tieu has many variants depending on which toppings are used. Some are humble, using only minced pork with bean sprout, while others can be more time-consuming with duck, seafood, meatballs, and prawn. Customize your dish with spices and herbs in accordance with your taste buds. 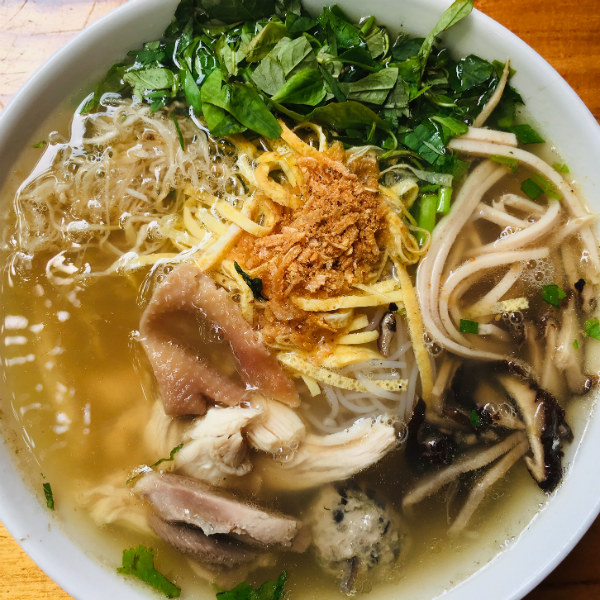 This is a nice alternative to Pho. Bun Thang, or Chicken-based Noodle Soup, originates from Hanoi. Like a painting, a bowl of Bun Thang boasts colorful toppings: the white color of shredded chicken, light grey of julienned Vietnamese sausage, yellow of the egg, black of Chinese mushroom, brown of dry pickled radish, orange of dried shrimps, and green of chopped herbs. Add a small amount of lime juice and chili paste, then sip its light clear broth, you will recognize a few dishes can beat this noodle for delicious Vietnamese food. 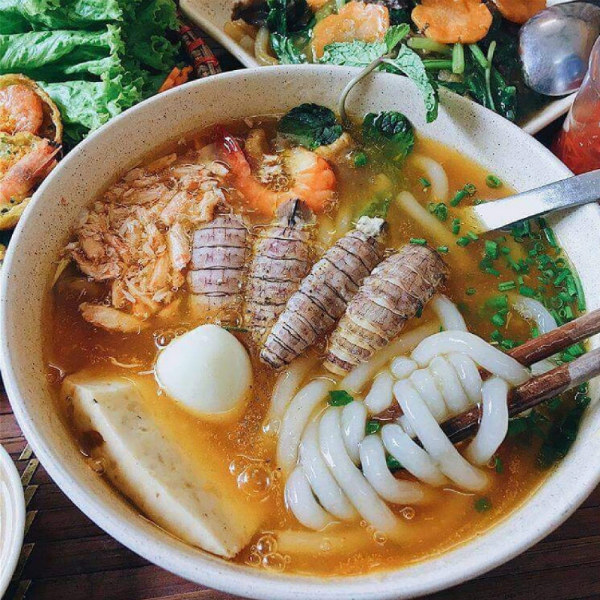 You might need your whole life to try all kinds of Banh Canh in Vietnam. Each comes with a different topping as crab, fish cakes, shrimp, pork meat, snakehead fish, or beef balls with a lot of chopped onion and herbs.

Not as thin as noodles in Bun Bo Hue or Hu Tieu, noodles of Banh Canh are thick and made from a mixture of rice flour and tapioca flour. The flour is rolled by hand and cut into long strands which are similar in appearance, but not in substance, to udon. Noodles then are thrown into the boiling pork bone broth to cook for a couple of minutes before serving. Tapioca flour helps thicken the soup, giving it a distinctive gelatinous texture which is different from other noodles in this list. 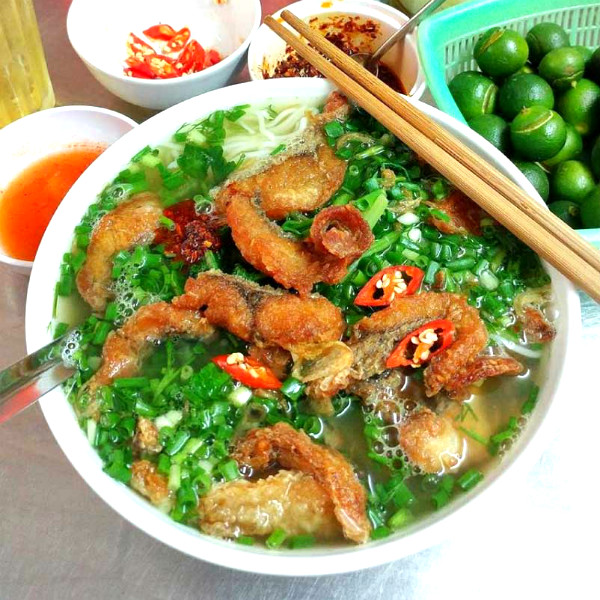 Bun Ca is a typical dish of northern Vietnam where the freshwater fish is popular in the everyday meal of the local. Its slightly sour, flavorful broth is made by simmering fish bones with pork bones, sliced tomatoes, and wine vinegar for hours. Slices of fish fillet are deep-fried in oil until they turn a golden brown color and crunchy then placed on the noodles. A layer of chopped spring onions and dill herbs is topped on the bowl and hot broth is poured over to complete the savory dish. 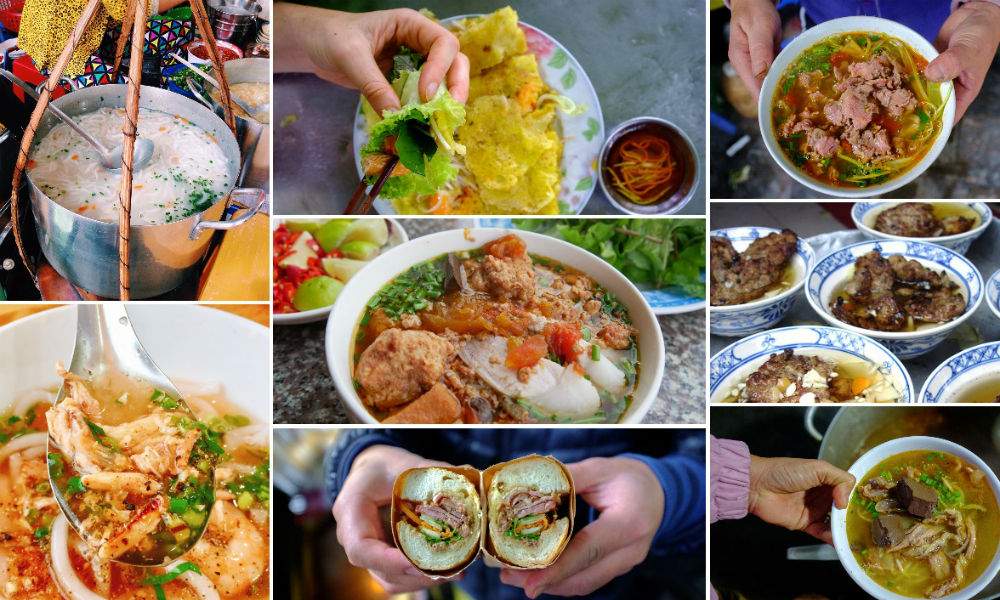 Contact our experts for an inspiring culinary tour in Vietnam