The reason is that of the different calendars.  Some countries such as Thailand, Cambodia, Myanmar, Thailand and in Sri Lanka and Chinese populations of Malaysia and Singapore primarily use the Buddhist calendar which is a set of the lunisolar calendar for religious and official occasions. The calendars share the same lineage but they still have some minor variations such as names of months, numbering, and intercalation schedules. Other Southeast Asian countries like Vietnam and Singapore use the same lunar calendar as China which is based upon cycles of the Moon’s phases. The details of when months begin to vary from calendar to calendar depend on when the moon changes its shape from new, crescent to full as well as other calculations. Though most of the world just know about Chinese New Year, Buddhist New Year is no less important and expectant than the other. From the Songkran festival of Thailand to Chol Chnam Thmey of Cambodia, here are some festivals that you might not want to miss.

Songkran might be the biggest and most popular festival for Thai people and visitors. This is also called Water Festival because it has named as the largest water fight in the world but you probably won’t mind the drenching. Songkran takes place in April – the “hottest” month of the year in Thailand. The festival originated from a belief of Thai people: Water will wash away bad thoughts and actions of the old year and bring good lucks in the new year, so the festival is all about cleaning and a fresh start. People clean their houses and wash the Buddhist statues with flower-scented water and the young folk pays their respect to the elder by respectfully pouring water over their hands.

Nowadays, the festival becomes popular worldwide. Locals and travelers rush to the street, spend whole days splashing water on each other. If you're out and about on Songkran, don't expect to return to your hotel room dry! 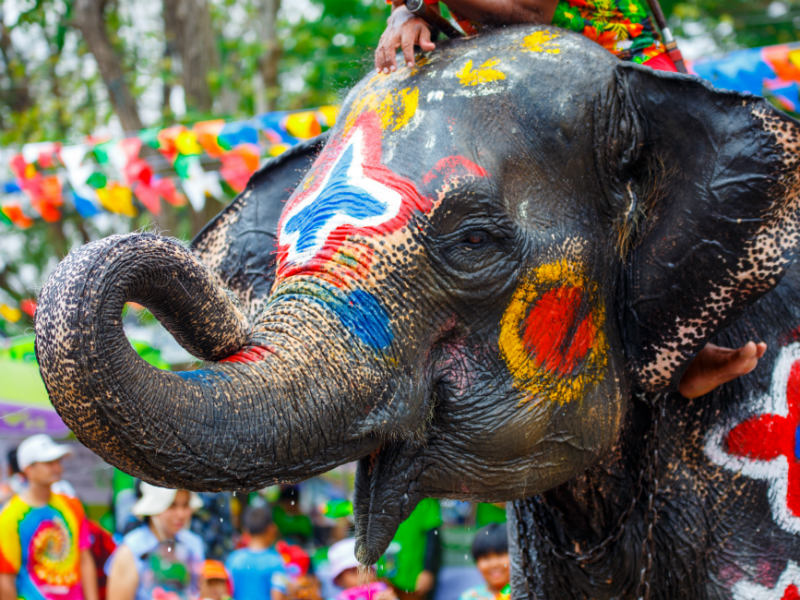 Songkran might be the most expecting festival of Thai people and visitors. Even elephants go downtown to splash water to partakers 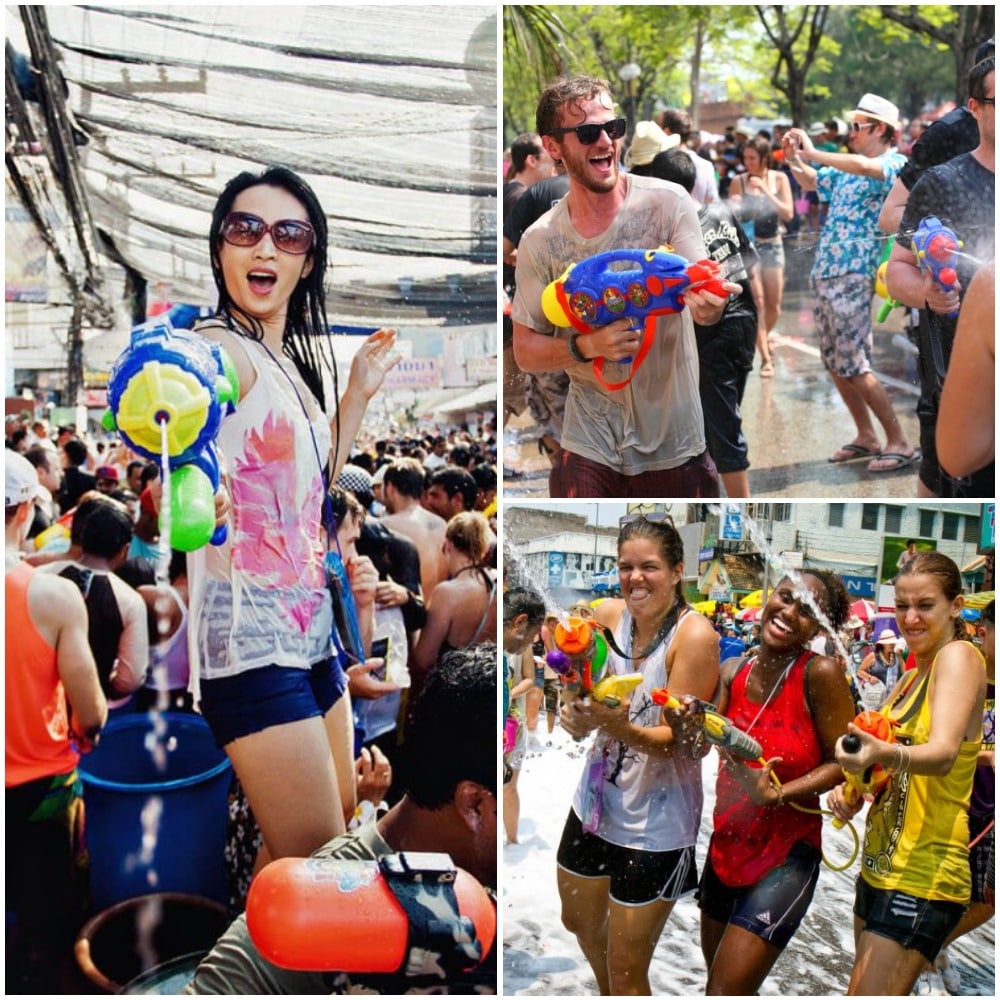 It names as the largest water fight in the world because many people will travel here to fight... 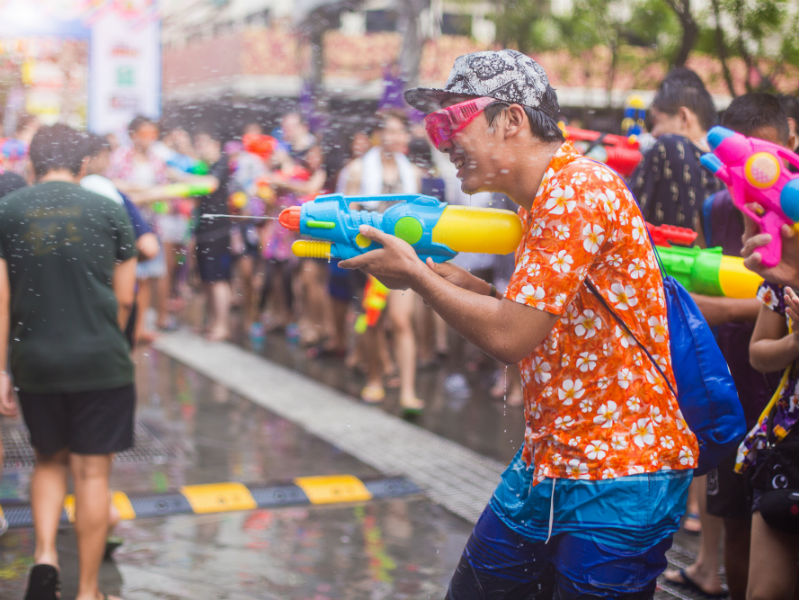 ...so find a water gun and start the battle

The New Year in Laos - known as Bun Pi Mai - is almost as splashy as the celebrations over in neighboring Thailand, but getting soaked in Laos is a more gentle process than in Bangkok. The celebration lasts three days in April – the middle of the hot summer season. During Bun Pi Mai, Lao people clean their house and the Buddha images in the temples. They pour jasmine-scented water on the elders first, then on friends and others on the streets. Foreigners are not exempt from this treatment, so if you're in Laos during Bun Pi Mai, do expect to be soaked by passing teenagers, who'll give you the wet treatment from buckets of water, hoses, or high-pressure water guns. The faithful will also build sand stupas and decorate these with flowers, flats, and string. At temples, monks will provide the water as well as bless peace and longevity for the devotees, and they will tie up devotees' wrists with string. Birds, fishes, snacks are released as good deeds in the New Year. 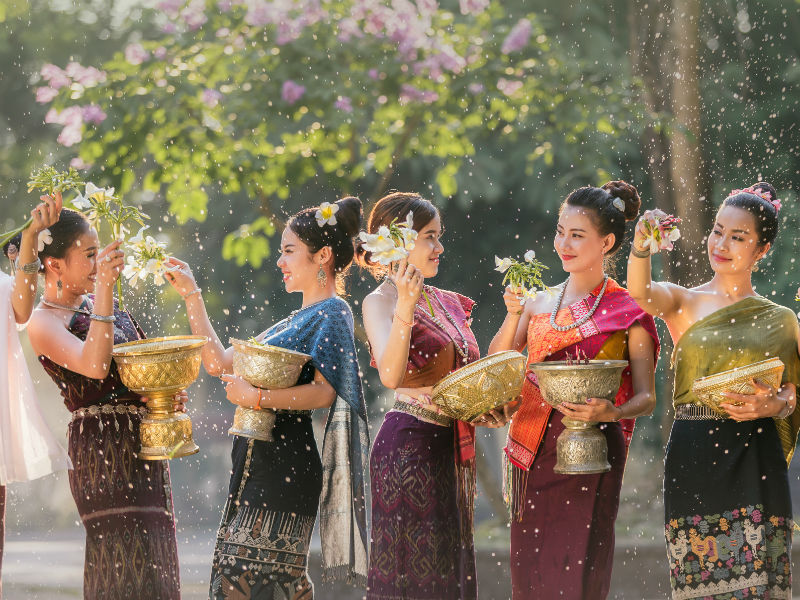 The New Year in Laos - known as Bun Pi Mai - celebrates in 3 days. 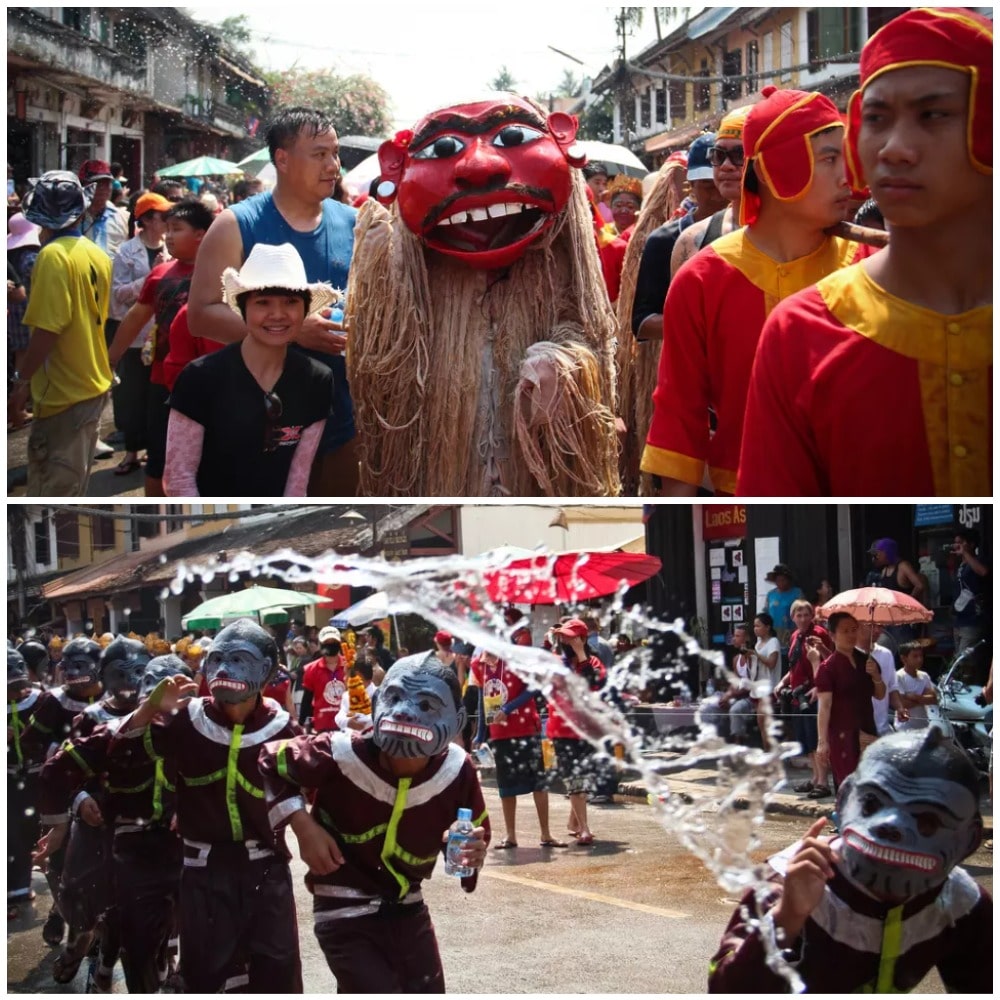 During Pun Pi Mai, there are many activities including the annual Nangsoukhane beauty pageant, night parties with traditional music and dance, and parades.

Chol Chnam Thmey means “Step to New Year” marks the end of the harvest season in Cambodia, a time of leisure for farmers who have worked hard all year in their fields. At the temples, entrances are decorated with colorful flowers and coconut leaves. Khmer offer food to their departed relatives at the pagodas and play traditional games in the temple courtyard. The Cambodian New Year takes part in three days, each with their own name ritual meaning.

In the first day, “Moha Songkran”, Khmer cleans the house, prepares food, deserts and everyday-used items offering to the monks in the pagodas. In Cambodia belief, the things they donate through the monks will reach to the hands of their dead ancestors in the hell, the more they donate, the better the dead ancestors will wish for them, and so they are called “the grateful”. To wish for luck, the Khmers use holy water to clean their faces in the morning, wash their bodies in the noon and clean their feet before they go to bed. The conservative community of Khmer people permits free mingling between males and females on this day only, so if you are looking for your future partner, hurry up to book a trip to Cambodia in their New Year festival.

Day two - "Wanabat" - is a day for showing respect to the elders, both living and departed. Khmer people will donate to the poor and the homeless people on this day. In the temples, family members gathering to honor their ancestors and build a sand hillock on the temple ground. They make a big hill of sand in the center which represents Culamuni Cetiya, the stupa at Tavatimsa where the Buddha’s hair and diadem are buried. The big hill is surrounded by 4 small ones which represent 4 stupas of Buddha’s favorite disciples: Sariputta, Moggallana, Ananda, and Maha Kassapa. The sand hillock is said to bring rain for crops and bless for people.

“Thgnai Loeung Sak"  is the last day of the festival which is also the first day of New Year. Devotees bathe Buddha statues in a ceremony called “Pithi Srang Preah” as a symbol of washing bad action away. They also wash the elders and monks with perfumed water to ask them for forgiveness for any mistake made during the old year and obtain from them best wishes on longevity, happiness, and prosperity in life. Chol Chnam Thmey means “Step to New Year” marks the end of the harvest season in Cambodia, a time of leisure for farmers who have worked hard all year in their fields 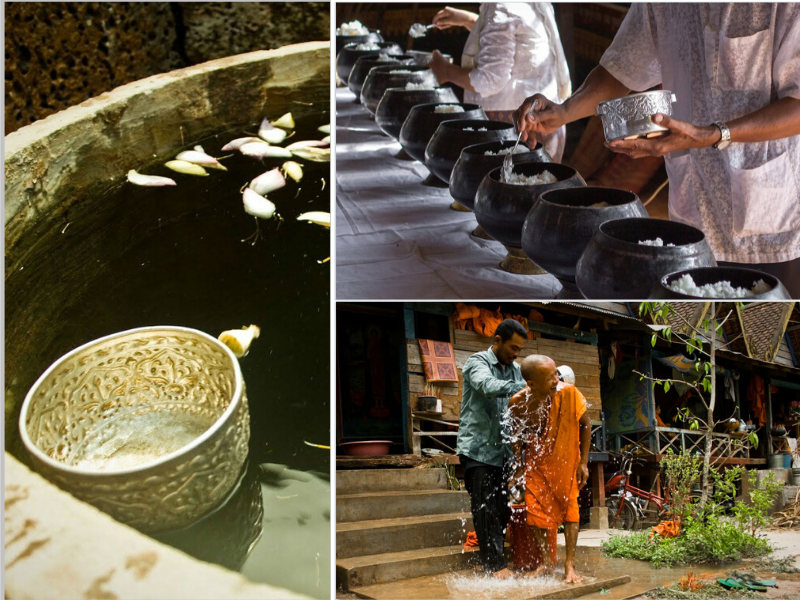 People offer rice at monasteries, prepare perfumed water to wash the elders and the monks.

Thingyan - one of Myanmar's most anticipated festivals - takes place over a period of four or five days in April. Same with the Buddhist New Year festival in Thailand, Laos, and Cambodia, the water throwing is a major part of the holidays, with the streets being patrolled by flatbed trucks bearing revelers throwing water on passersby. The holiday derives from a traditional Hindu belief that Thagyamin (Indra) visits the Earth on this day (Indra is a Vedic deity in Hinduism, a guardian deity in Buddhism, and the king of the highest heaven called Saudharmakalpa in Jainism). To please Thagyamin, Myanmar people will provide food and money to the poor and monks and the young bathes their elders as a sign of respect. Water splashing is considered the most interesting activity of the festival. Burmese people believe that it will wash away the impurity which had accumulated over the past year and greet New year with a purity of mind and body. Since the old time of Bagan, the festival of water has been very popular among the people, the nobles, and the rulers. In the past, the Burmese used the foliage of apple leaves, dip them into the scented water in a bowl or a silver bowl and then sprinkle on the other. The leaves have represented the symbol of good luck which will bring blessings to both people are sprinkled and the sprinklers. But nowadays, Myanmar celebrates the festival of Thingyan with plenty of water, they use faucets or buckets to toss water on passerby making a lot of laughs and fun because everybody joins the battle with enthusiasm. When you get wet, it means your sadness is no longer exists, your soul is cleaned of the past year’s evils and imperfections, save room for a new year with happiness, luck and the purity in mind. 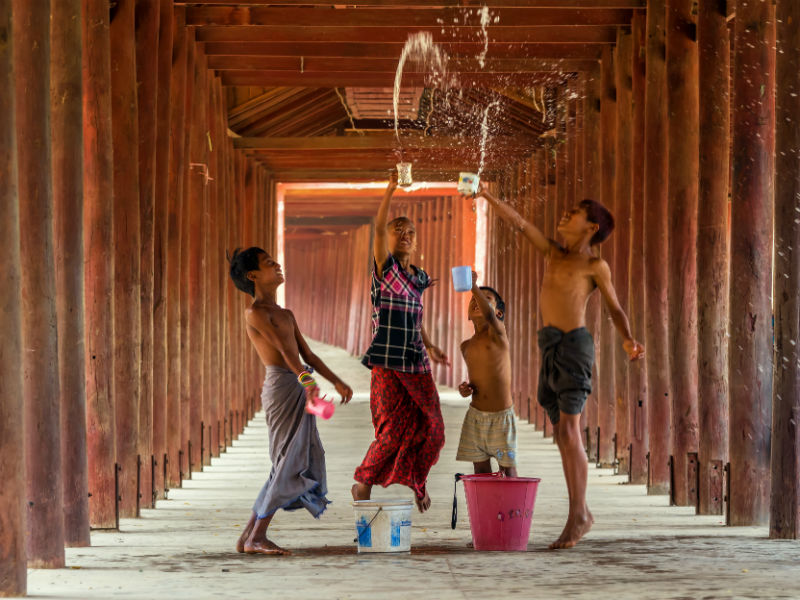 Water splashing is considered the most interesting activity of the Thingyan festival. Burmese people believe water will wash away the impurity of the old year to greet a new year with a purity of mind and body (Photo: Yetun) 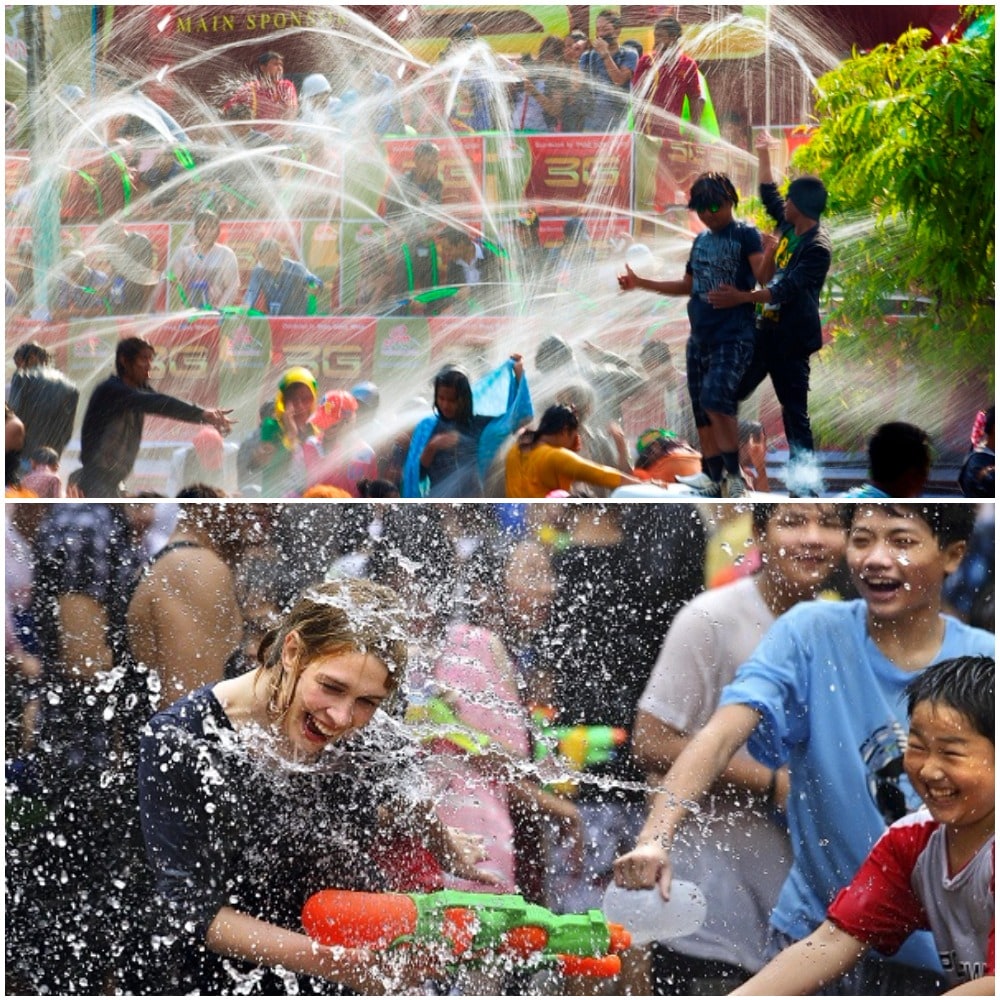 Myanmar celebrates the festival of Thingyan with plenty of water, they use faucets or bucket to toss water on passerby making a lot of laugh and fun 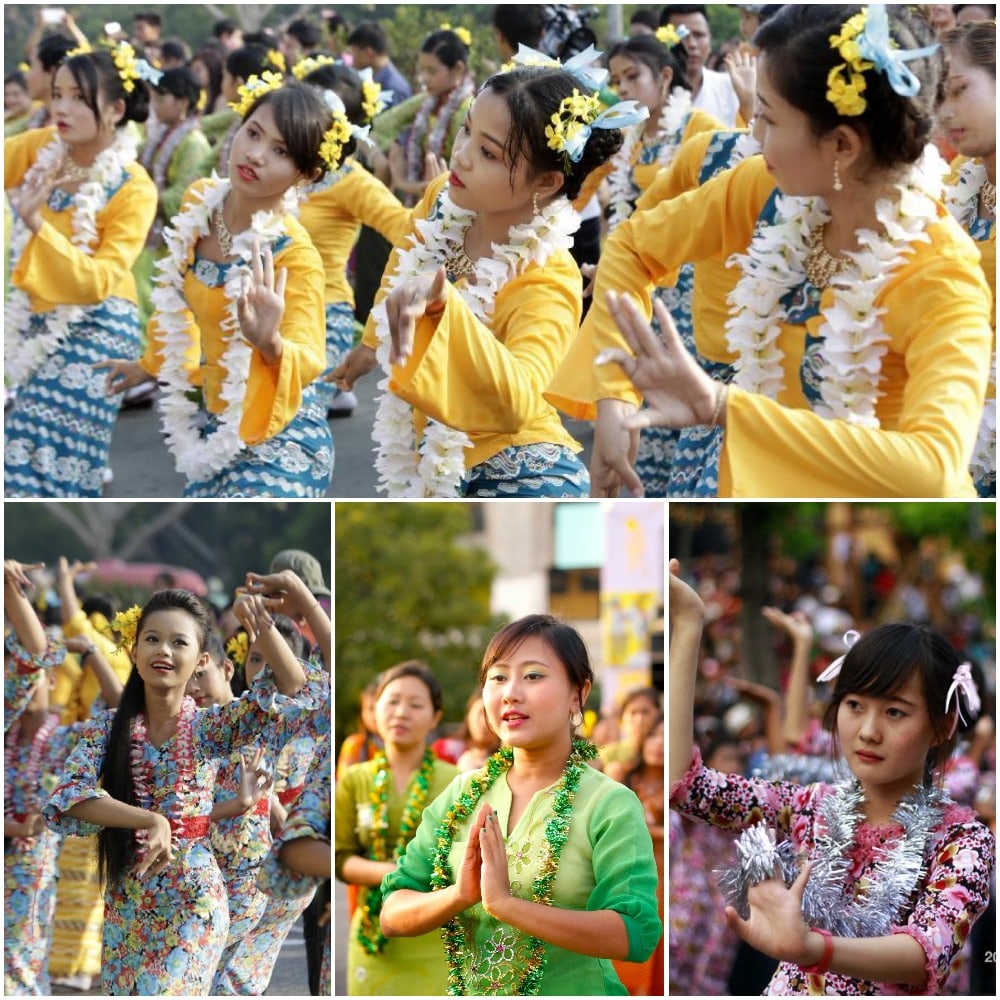 There are many other activities during the Thingyan festival to keep you exciting all day.