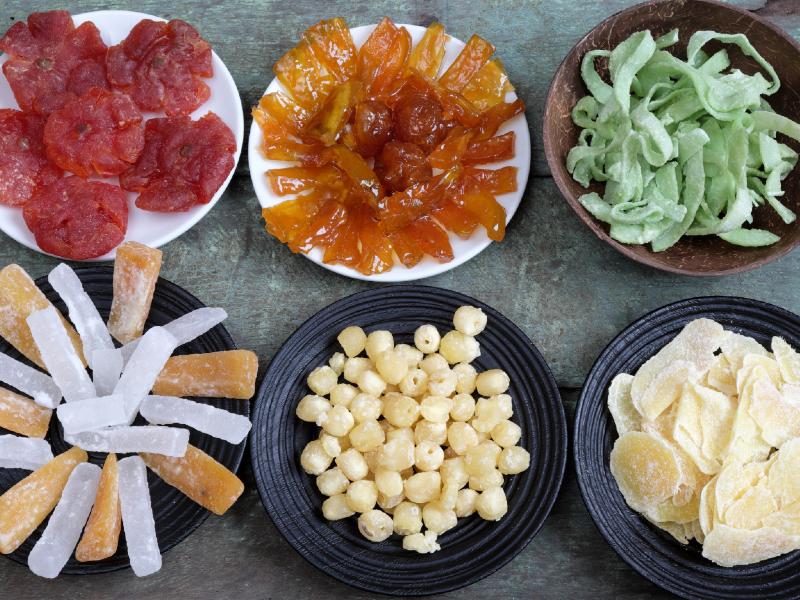 When the weather is getting colder and colder, the drizzle starting to sprinkling down from the cloudy sky, and hoa dao (peach flower) and hoa mai (ochna integerrima) beginning to brighten up the whole country, it’s time to talk about Tet, the Vietnamese Lunar New Year. And with just under 3 weeks left until people in Vietnam, along with many other people across Asia and even across the world say goodbye to the Year of Horse and welcome the Year of Goat (2015 Tet falls on February 20th) with hope and joy, let’s find out how Tet is celebrated in Vietnam with Exotic Voyages through our series of posts about Vietnam Tet Holiday.

In this first part, we will take a look at 7 unique Tet foods. Altogether, they create a distinctive feel and flavor that make Vietnamese people abroad feeling homesick just by looking at their pictures. But before starting, here’s an interesting fact about this grand nationwide festival. I’ve just said about “how Tet is celebrated”. However, in Vietnamese language, Tet is not literally celebrated, but “eaten” instead! In Vietnam, ăn Tết (eat Tet) is understood as to celebrate Tet. This shows how important food and cuisine is to Vietnamese New Year.

Ask anybody in Vietnam which food comes to their mind first when talking about Tet. I’m sure that the answer is banh chung and banh tet (it’s tét, not Tết, the festival). While both of these banh are essentially rice, fatty pork and bean fillings packed neatly inside green banana leaves or dong leaves, there’s some obvious difference between them. In general, banh chung is an iconic Tet food in Northern Vietnam. Meanwhile banh tet usually represents Southern Vietnam. 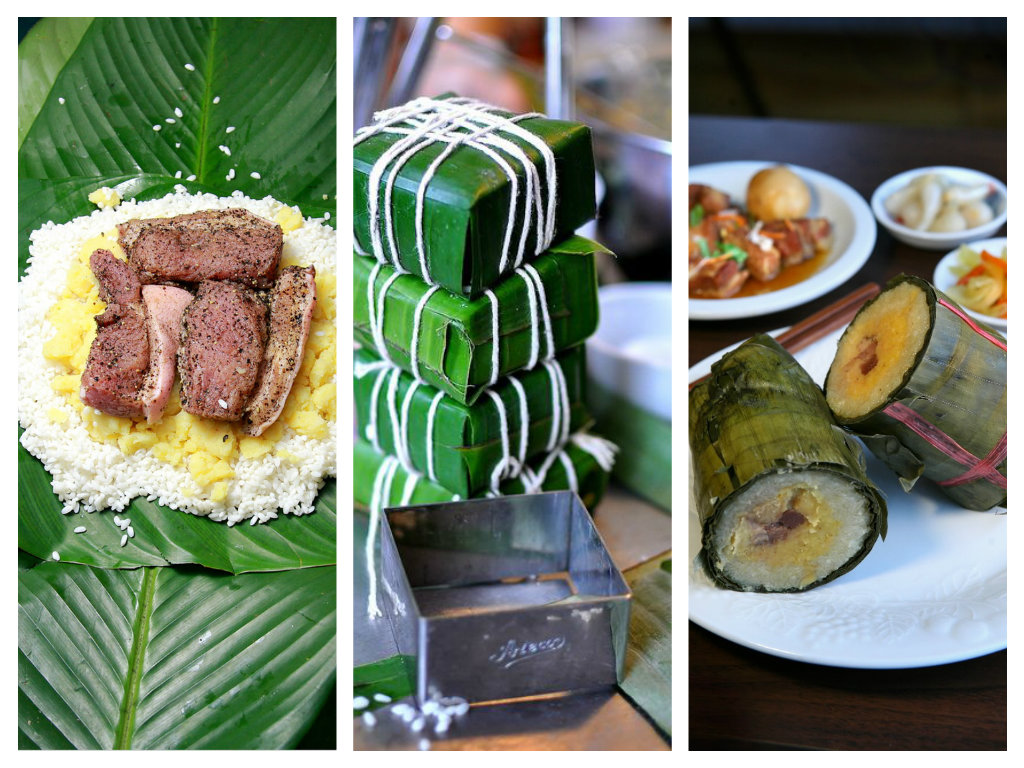 Apart from the regional difference, their shape is quite contrasting too. Banh chung is square as it symbolizes the earth (ancient Vietnamese people believed the sky is round, the earth is square), while banh tet is tube-shaped. To many Vietnamese people who have the chance to gather with their family to make banh chung overnight, sometimes the making process even brings more Tet memories and stories than the flavor itself does.

This is another popular Tet food that is easy to make. Boiled chicken is basically a whole chicken boiled to the color of pale yellow. The chicken is not to be eaten until it had been placed on the altar to pay homage to their ancestors. 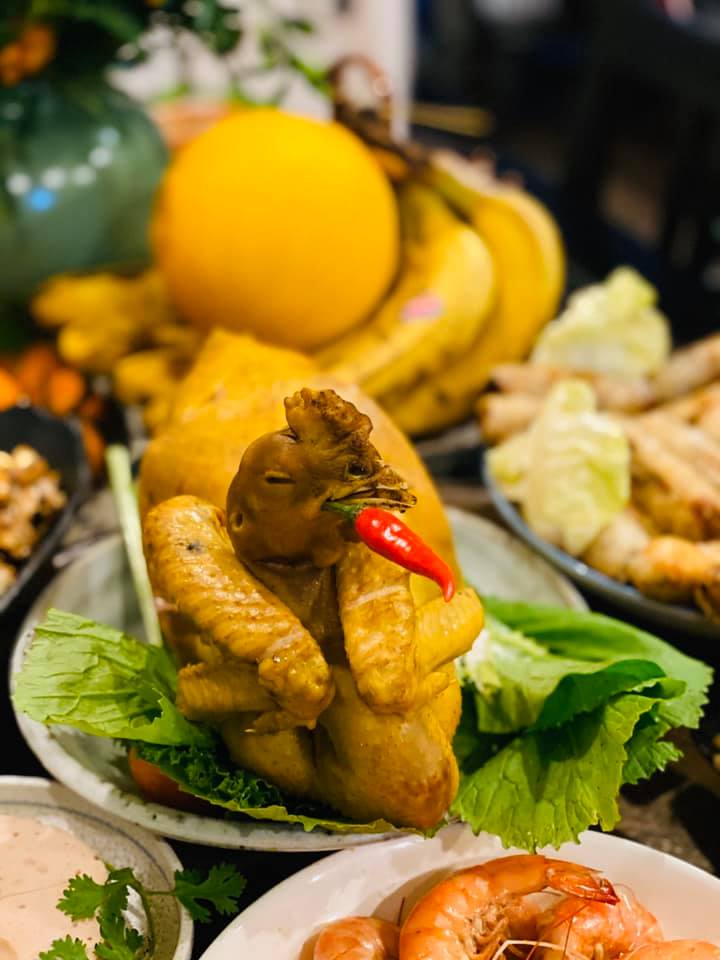 Afterward, the chicken is cut to smaller parts like a turkey in the west. Because Vietnamese people often simply boil the chicken with only water, it is often eaten with a tiny dish of salt, thinly-sliced lime leaves, some lime juice and sometimes a bit of sliced chili as side seasoning.

They call gio cha Vietnamese sausage because of the somewhat similar shapes. However, unlike normal sausages, gio cha is often cut down to pieces across the length of it for every people. Similar to banh chungand banh tet, gio cha is packed tightly within green leaves so it could last for months.

But the difference is gio cha’s fillings are lean meat sauced with fish sauce and pepper. And gio cha is not a single food but two instead. Gio is filled with boiled meat whilst cha is made of deep-fried meat.

Every meal in Vietnam includes a shared bowl of soup and Tet meals are no exceptions. During Tet, people from across the country often go for a frugal and hot bowl of vegetables soup with pork skin. The vegetables selection often includes broccolis, cauliflowers, carrots, mushrooms and peas, added with young shrimps and some meatballs. 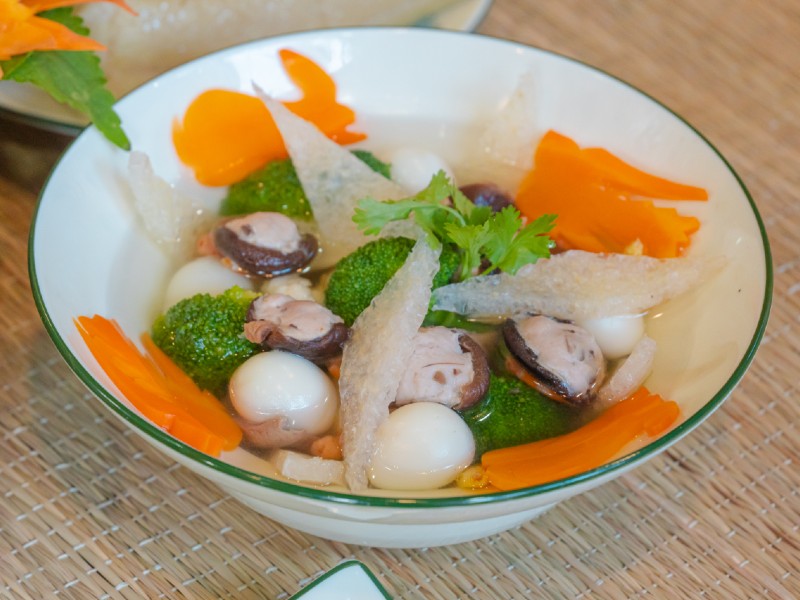 The broth is slightly sweetened with braised meat bones. Ingredients are plenty but the only one thing that can’t be left out is the pork skin. Though its flavor is very light, the pork skin gives joy to eaters by how its scabrous surface felt inside the mouth when being chewed.

Although not every people in Vietnam is able to eat these pickled things, they are still an unquestionably one of the essential foods during Tet. This can be proved in this following famous traditional couplet about Tet: Thịt mỡ, dưa hành, câu đối đỏ Cây nêu, tràng pháo, bánh chưng xanh literally translated as below: Fatty meat, pickled onions and cabbage, red couplets Neu tree, firecracker, green banh chung 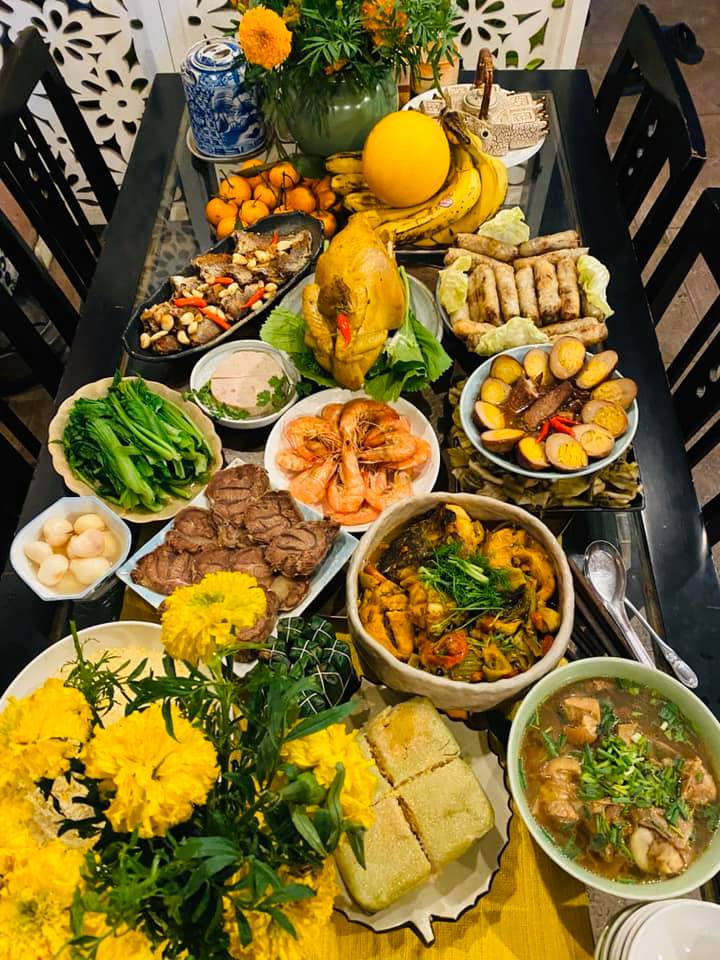 The five-fruit tray is a must-have on the altar during Tet. The exact selection varies through time, region, and even the house owner’s preference. However, they must be of a different color as the five-fruit tray also plays an important role in decoration for Tet.

In Northern Vietnam, popular choices are orange, banana, pomelo, green apple, pear and the “Buddha’s hand” fruit. Meanwhile, in Southern Vietnam, where some of those fruits are not available due to a hotter climate, people often choose watermelon, papaya, mango, pineapple, coconut or dragon fruit.

This is the favorite one for children across Vietnam during Tet. The candied fruits platter is often bought in the set or chosen one by one, or even made in-house. Apart from being used to welcome guests, they are a common choice within Tet gift baskets. Like the five-fruit tray, candied fruits often vary a lot in terms of the component. The most popular ones are coconut, carrot, star fruit, lotus seed, ginger or kumquat.

The candied fruits platter are often put on display on a round box used only for Tet. A beautifully-decorated traditional box is divided into five to seven smaller segments. Each segment store one or two items. I say items instead of fruits because apart from fruits, the box also includes pumpkin seeds, watermelon seeds or sunflower seeds. In recent years, these boxes have evolved quite considerably, with candies, chocolates or pistachios replacing candied fruits. So here you have it, the 7 most popular foods that you shall encounter when traveling to Vietnam during Tet. We hope you enjoy this post and we will come back next week with more Tet-ness.