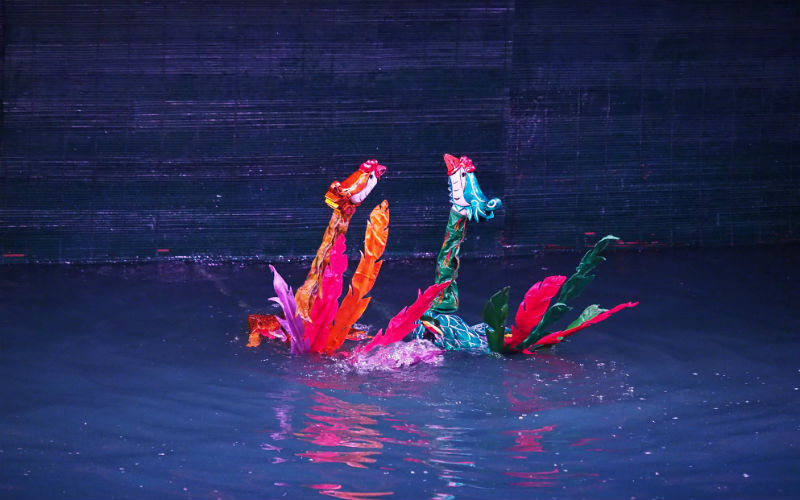 The Art of Water Puppetry in Vietnam

Home Travel Blog The Art of Water Puppetry in Vietnam

Though puppetry appeared more than 4000 years ago in most of the continents, it is only in Vietnam that water puppetry was developed. No exaggeration to say that water puppetry is one of the most indigenous cultural traits of Vietnam. Let’s explore this traditional art form with Exotic Voyages.

​Historians believe that water puppetry originated from wet rice civilization in the Red River Delta of Northern Vietnam during Ly dynasty (1010-1225). The first evidence for this art form is a piece of writing in “Sung Thien Dien Linh” stone stele, dated from the kingdom of Ly Nhan Tong.

Used to be a communal performance during harvest time, water puppet shows gradually became an entertaining activity for the Royals, especially in anniversaries and celebrations.

One outstanding difference between water puppetry and land puppetry is the set-up of the stage. Water puppetry stage, usually 4 meters square, is called “thủy đình” (“thủy” means nước, “đình” is a communal house). Puppeteers set up the stage on a pond or a portable tank built for traveling performance or in a pool stage as in many water puppet theaters in Vietnam. The level of water is kept waist-deep of the puppeteers so that they can manipulate the puppets behind.

Water Puppet Stage set up in a traditional village

Water puppets are made of a special type of wood, which can easily float on the water. Puppet makers base on the human shape to carve the puppets, then polish and decorate with meticulous details. The puppets are then painted with vivid colors to highlight their own characters. Most of the puppets look pretty, cheerful, humorous and symbolic.

“Chu Teu” or “Mr. Teu” (Teu means “laugh” in ancient Vietnamese) is the character that appears in almost every water puppet shows. Like his name, he is the one that brings a lot of laughs during a water puppet performance. He is funny firstly because of his look. Chu Teu is often bigger than other water puppets’ shape, with whiter and pinker complexion and a fat belly. He is the most talkative and cheerful character in the show, therefore, he sometimes acts as a narrator, sometimes as a commentator. Chu Teu has many things in common with locals in Northern Vietnam, who are a little bit chatty and whose life is attached to an agricultural society.

Besides the puppets themselves, the greatest contributor to a successful performance is the artists. They control the puppets from a closed room behind the stage. Not only making movements to the rough sculptures, but the puppeteers also breathe new life into every action of the puppets by their excellent storytelling skills.

Stories in water puppet performances are often commonly known folk tales among the Vietnamese. Despite several similarities in the plot as worldwide famous Cinderella or Beauty and the Beast, Vietnamese folk tales holds the essence of Tonkin area, from cultural surroundings with banyan trees, communal houses to time-honored cultural activities like dragon dance, traditional competitions like buffalo fighting… Therefore, watching a water puppet show is an opportunity for visitor to visualize the old days of the rich Tonkin culture.

There are approximately 30 shows in the Vietnamese treasure of water puppet. Greatest and most professional puppet art troupes operate mostly in big cities like Hanoi, Saigon, Hai Phong, Hoi An, Hue.

Thang Long Water Puppet Theater, Hanoi Opened in 1969, Thang Long Water Puppet Theater should be the most well-known place to offer water puppet shows. The theater nestles in a small corner of Dinh Tien Hoang street, facing the iconic Hoan Kiem lake in Hanoi. There are up to 6 performances per day with English subtitles on the screen. Performances on request are also available if visitors would like private space. Ticket price ranges from about US$ 2.5 - 5. There will be a surcharge for camera use.

To get the event calendar of Thang Long Water Puppet Theater, don’t hesitate to contact our experts.

Located in a less central area of Hanoi, Vietnam National Puppetry Theater seems to be the largest water puppet theater in Vietnam. This theater covers an area of more than 7000 meters square in Truong Chinh Street, Thanh Xuan District. In addition to water puppetry shows on both outdoor and indoor water stages, there are also other traditional performances, for example, quadruple dancing, flaming fire dragon, fairy dance,… Interested guests can also pay a visit to a museum of Vietnamese water puppetry near the theater to discover more about the history of this authentic art form.

Hoi An Theater, Hoi An

Though Hoi An Theater is not as big as the other, water puppeteers put a great deal of effort in every show. Each detail is elaborated, from content to set-up so that audience can really get into the artistic aspect of Vietnam in general and Hoi An in particular. This theater only offers water puppet performances on Tuesday, Friday, and Saturday so it’s better to check with our experts.

Golden Dragon Water Puppet Theater is situated in District 1, right in the middle of Vietnam. There are nearly 600 seats for each 50-minute performances. All the shows are held in the evening, continuously from 5 PM to 8.30 PM. If you travel in a group, it’s better to ask travel experts to set daytime performance in advance.

Water Puppet and Traditional Art Theater, Hue Hue is already famous for time-honored imperial architecture, which creates a very appropriate surrounding for traditional art performances. Unfortunately, the Water Puppet and Traditional Art Theater are currently closed for reconstruction. The new theater will be built in the proximity of Nhu Y river with a total area of nearly 900 meters square. It is projected that the opening ceremony of the renovated Water Puppet and Traditional Art Theater in Hue will be conducted at the end of 2018. Leave a message to our travel experts to be the first visitors to this new theater. Water Puppetry is a precious intangible asset of Vietnam. It is suitable for all types of travelers. Those who are looking for a sense of cultural heritage can explore an art form only found in Vietnam. Children will also enjoy the cheerfulness in the puppets’ characters during the shows. If you have a chance, pay a visit to a water puppet theater, or contact us for a private show.