One Day At The Vietnam Bear Rescue Centre

23 Feb, 2018 | Travel Blog
From the ultimate guides of each destination, secret beauties, amazing things about food and culture to top suggested resorts and hotels, our travel blog is meant to help you travel Asia at ease and experience the best moments there without any hesitation.

We drove to the Vietnam Bear Rescue Centre to visit Murphy on a Saturday morning. Murphy is a 2-year-old sun bear that Exotic Voyages have sponsored since he was a cub. We didn’t see him for a while so everybody was eager to meet him again. Started from Hanoi center, we arrived at Tam Dao Mountain’s foothills in about 1 hour. The road was quite easy made our trip faster than we expected. The bear sanctuary wouldn’t open until 9 am, so we stopped at a temple near the center to rest. Although the temple is small, it has a beautiful lake and is surrounded by mountains, giving it a peaceful scenery. After 30 minute resting, we continued our journey to the Bear Rescue Centre. It doesn’t officially open to the public, but it offers open-day guided tours for small groups of pre-booked visitors twice a month.

Myths of bear bile and the result

Many Asians believe that bear bile is a miracle cure. They often mix the bile with wine at a certain rate then use this mixture to drink or rub as a treatment to liver diseases (including liver cancer, hepatitis, fatty liver,..), tumor, stomach cancer, trauma, inflammation as well as other diseases. 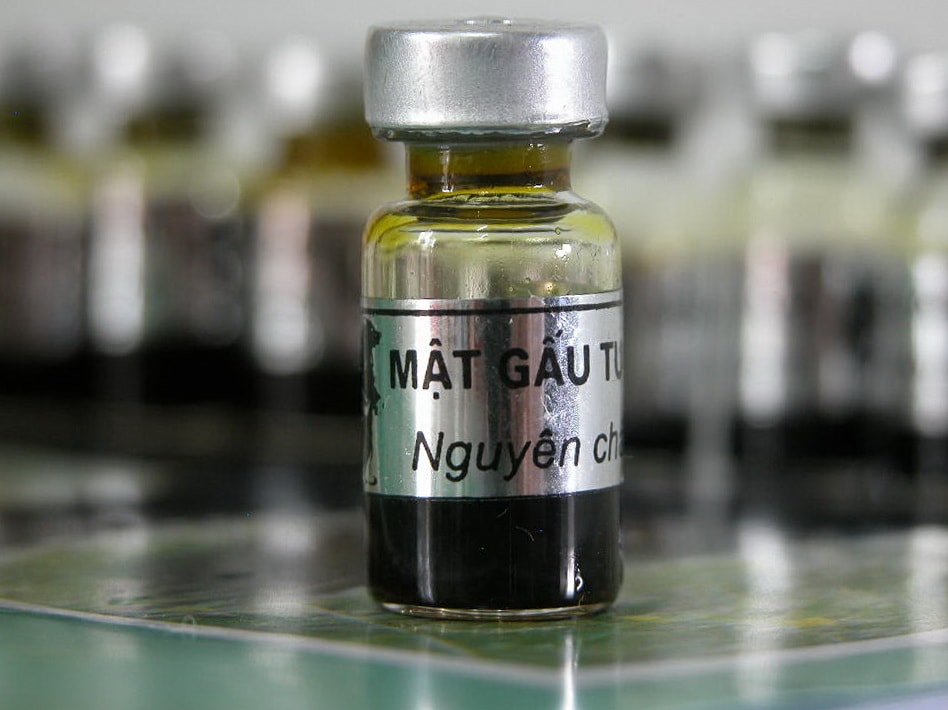 The bear’s bile is mixed with wine at a certain rate to drink or rub as a treatment for many diseases (Photo: khoahocdoisong.vn)

To meet the demand, many bear farms are formed. Besides trading, they trap the bear in the wild or even kill the mother to traffick the cubs. The bears are confined in small cages, poor hygienic conditions without medical care. Until 2017, 936 bears still have been confined in hundreds of farms and private houses in Vietnam and are subjected to regular bile extraction. Each bear is extracted about 90ml bile each time by a syringe, and the extraction is once per 2 weeks. The farmers may never know a clumsy extraction method can cause the leakage of bile into the body, lead the bears to a slow and agonizing death from peritonitis. Or they may know but they don’t really care!

These metal containers confined 19 bears in 2 months in Binh Duong. They suffered from hunger, diseases, and stress under the unrelenting heat of the sun 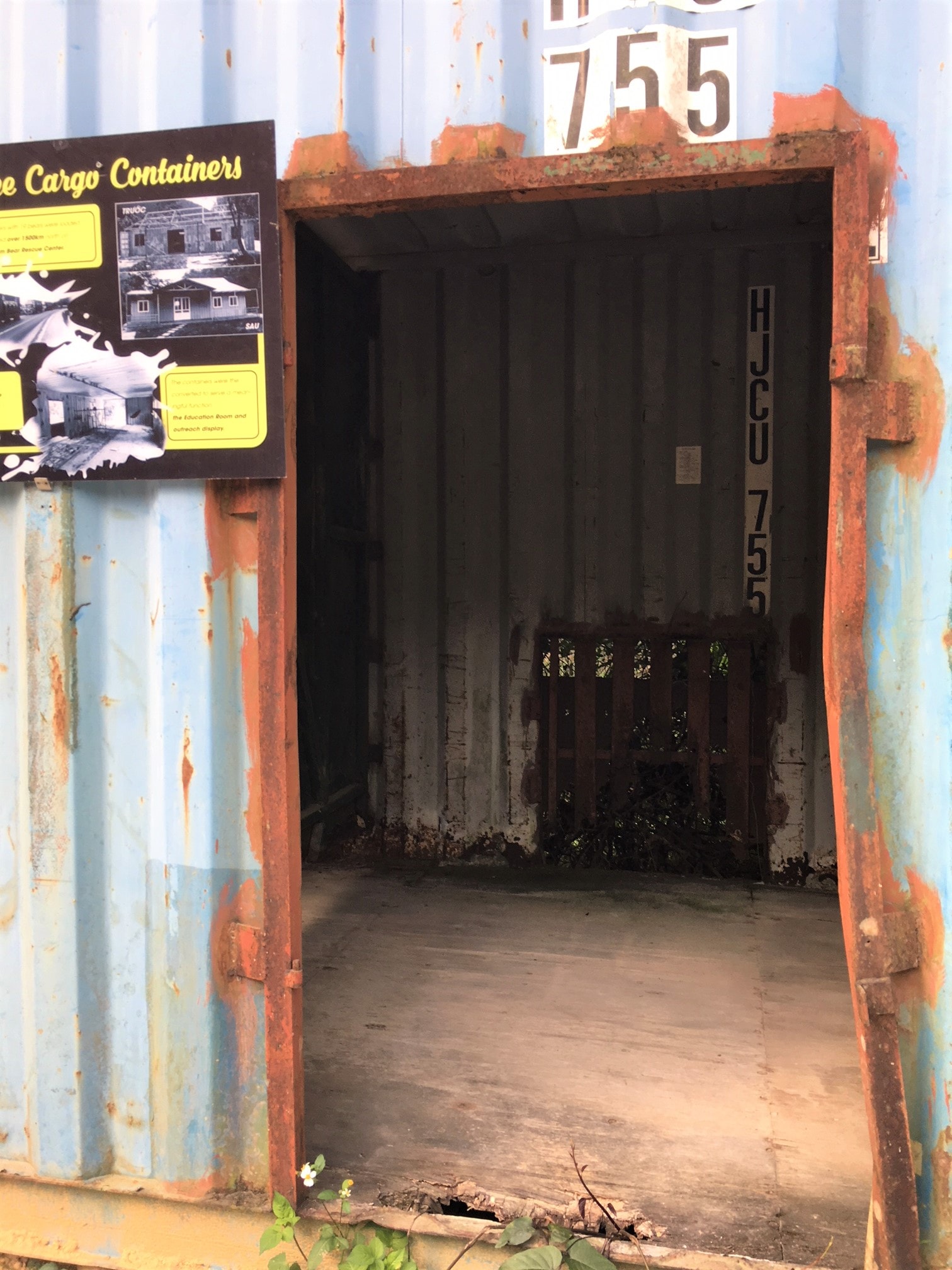 Inside a container which kept from 2 - 3 bears.

Facing the fact of hundreds of bears were abuse and regular bile extracted every year, Animals Asia, an international non-governmental organisation,  launched its first campaign to rescue bears in 1993. In 2005, Animals Asia signed an agreement with the Vietnam government to build a sanctuary for the bear and worked together to end bile farming. Now, Vietnam Bear Rescue Centre, located in Vinh Phuc Province, is home to 170 moon bears and sun bears.

Spreads over 12 hectares in the Tam Dao National Park, Vietnam Bear Rescue Center spends 30,000 sq meters to semi-natural outdoor space designed to stimulate the bear’s natural behaviours. There’s a bear hospital equipped will medical facilities to give the rescued bears the best possible chance of recovery. Nearly 100 staffs of the centre, including vets and vet nurses, bear workers, security guards, and maintenance staff… are working together to bring the best living environment to the bears.

From the iron cargo to the semi-natural bear house

Our guide is a young woman, named Hang. She has been working here for 6 months. Hang said Hanoi, Quang Ninh, Nghe An, Binh Duong have the most bear farms in Vietnam. Quang Ninh (where the Ha Long Bay, a UNESCO Heritage Site, is located) used to be the most bustling market. Some farms opened for visitors to witness in person how the bear bile was extracted during their trip to visit the beautiful bay. More cruelly, 26 bears were starved to death at a farm in Quang Ninh after their biles were no longer used while slaughtering wild animals are illegal. Arms, legs, bearskins were sold after that for other purposes. Luckily, after years with a lot of campaigns, bile farming ended in Quang Ninh in 2015. 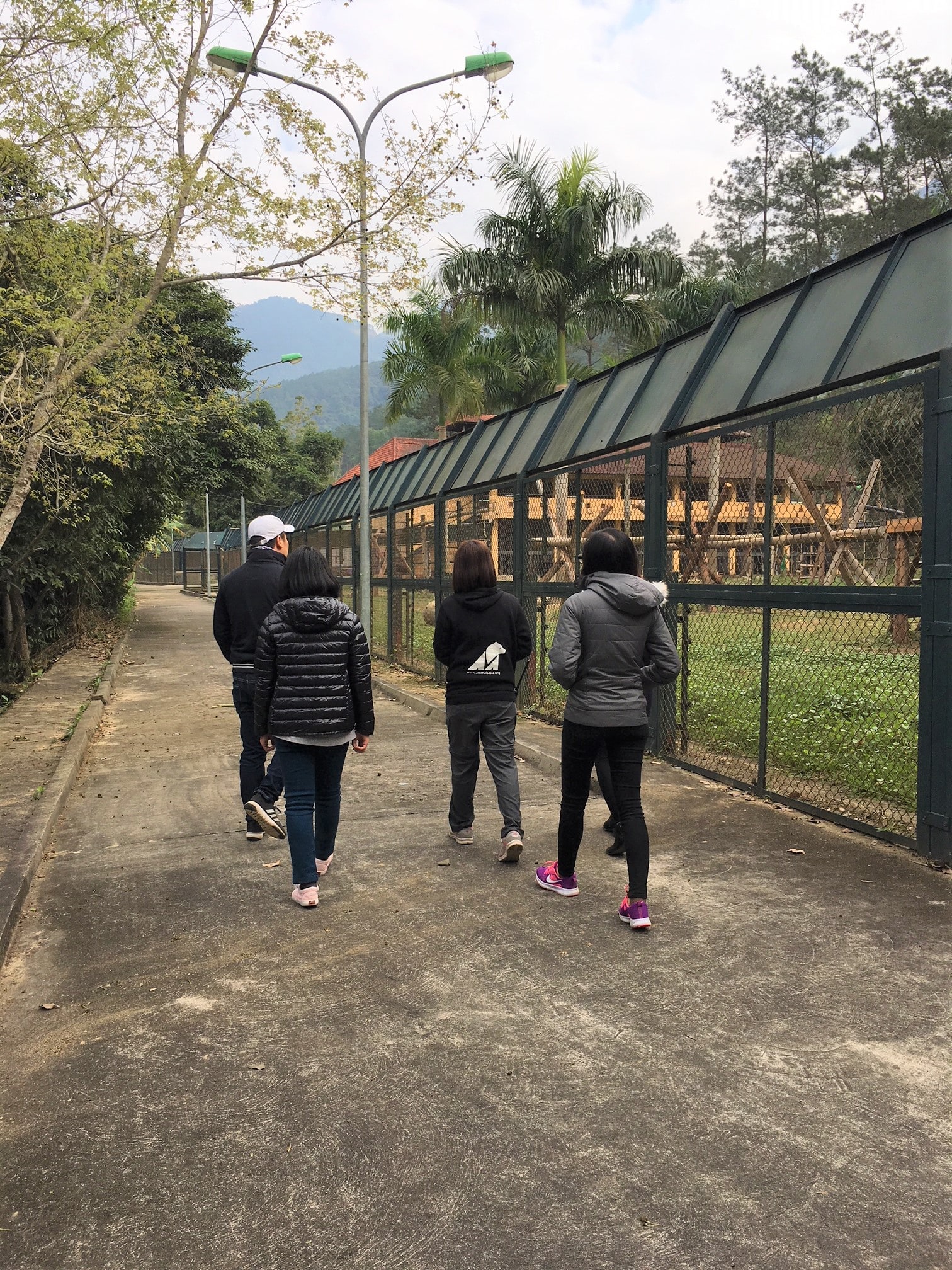 Hang took us to visit 3 in 5 double bear houses (It’s called house but it is a thousand of sq meter area). Each house contains two conjoined dens where the bears sleep and rest in the evening. In the day, they will play at an outdoor enclosure with pools, trees, bamboo stands, and wooden structures designed to keep them active and stimulate their natural behavior in the wild. To live in these areas, a bear needs from 6 to 12 months grouping with another bear in an isolated house to make friend and learn to live in groups. 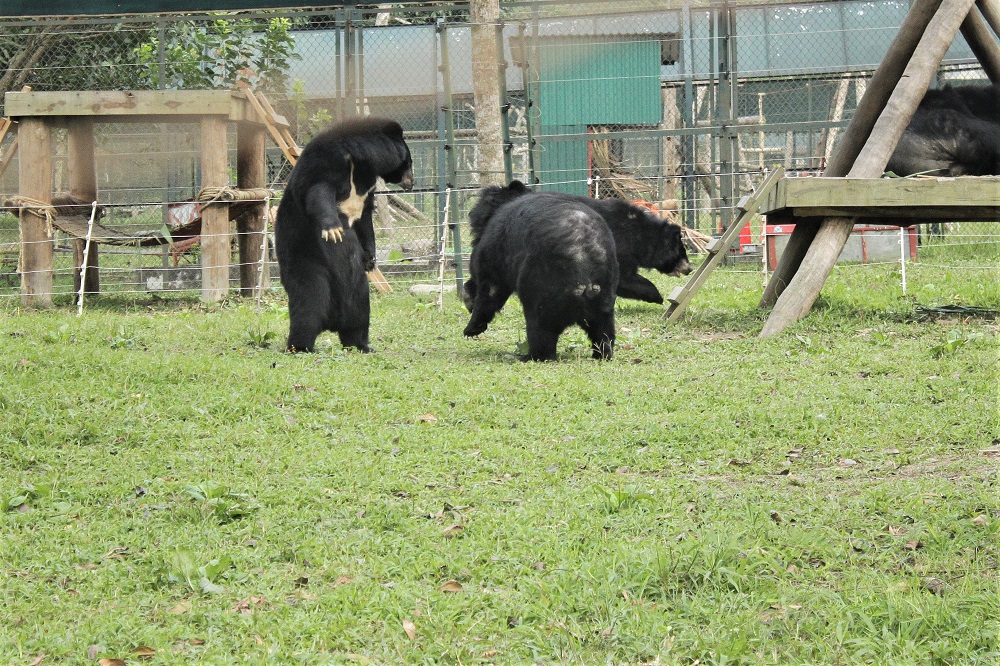 According to Hang, all the bears sent to the sanctuary were in bad conditions. They suffered from various physical ailments, such as gallbladder damage, scarring of internal abdominal structures and gallstones from clumsy bile extraction methods; missing feet or limbs from being caught in the wild to heart disease and tumours. On top of this, many are also anxious, angry and frustrated. But here, we saw bears climbing bamboo stands to pick carrots and bananas which were tucked on the holes. Some were playing swings made cleverly from the old tires while others were laying up leisurely on a rattan hammock. The bears all looked very relaxing. Hope that all their physical and mental injuries will stay in the past forever so they can enjoy a happier and better life in the sanctuary. 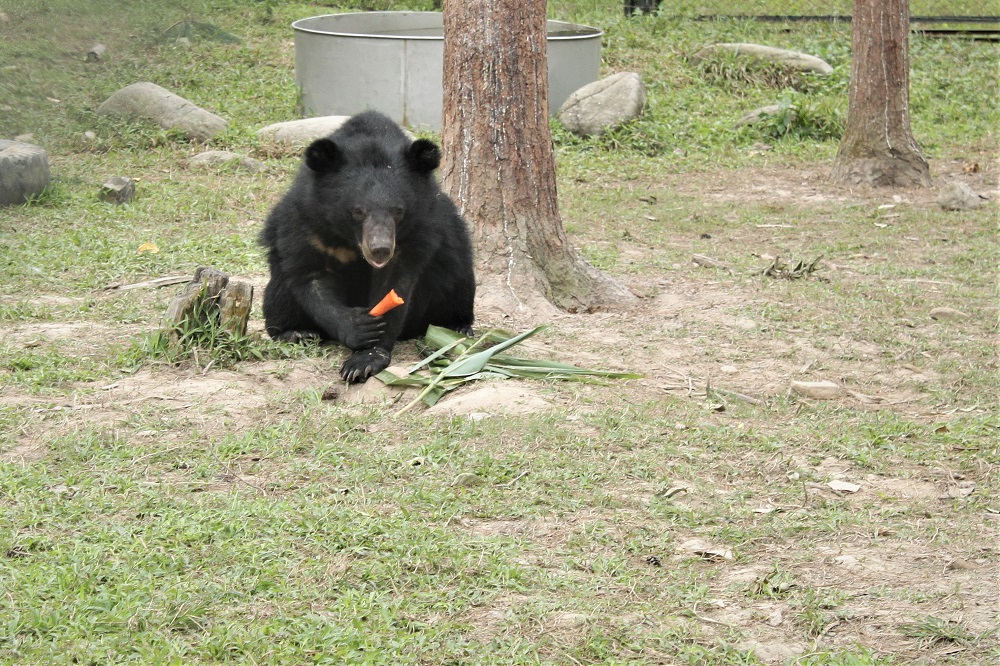 An adult bear needs around 5 kilograms of vegetable a day. That means the bear centre needs 850 kilograms each day to feed the bears. 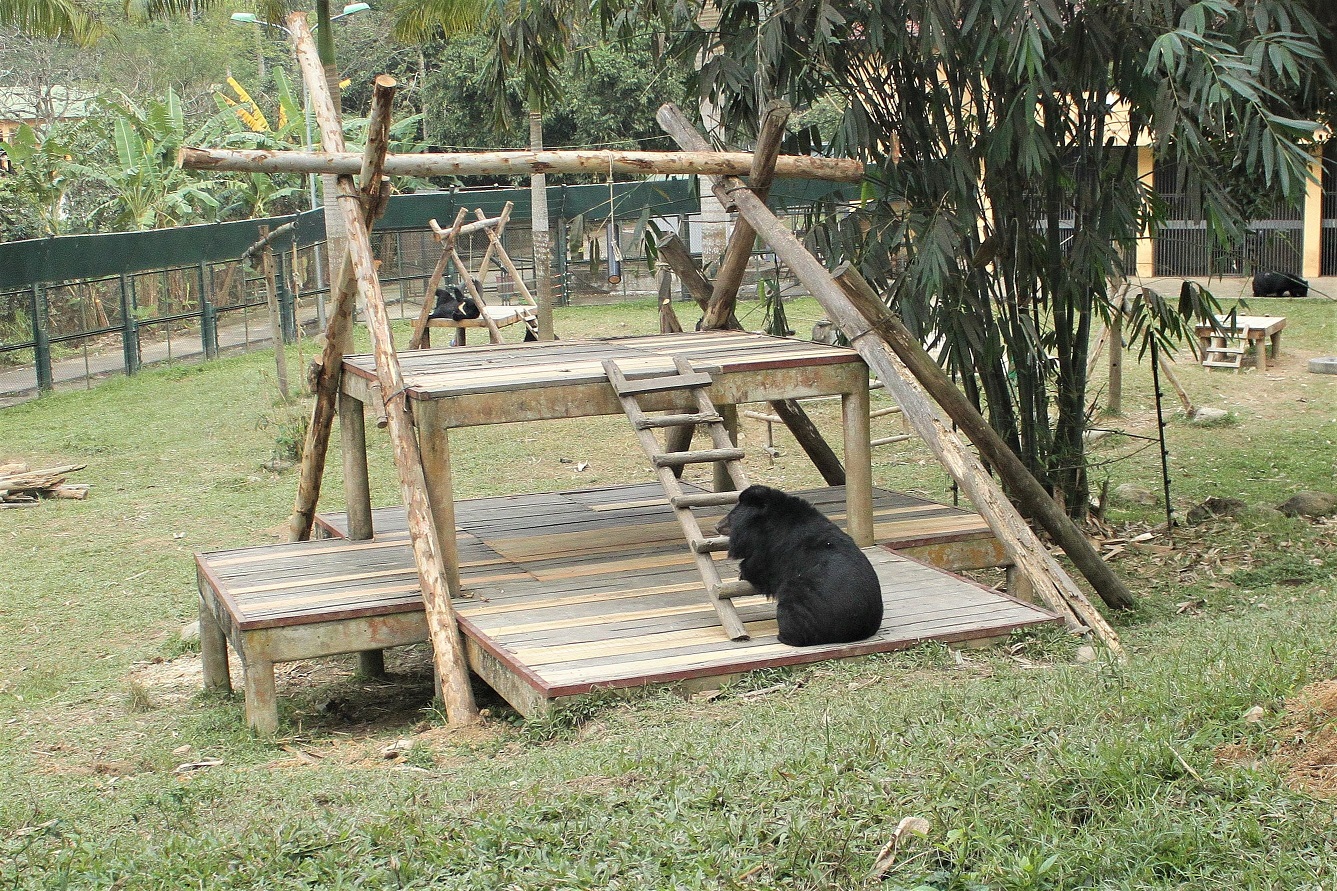 No longer being confined in the dirty cage, the bears now can play…

… and enjoy their new life

Stories telling on the way

Every bear in the centre has a different name as a different touching story. We heard Hang told about Grier - a female bear was blind when she arrived at the Vietnam Bear Rescue Centre. She was nervous about unfamiliar noise after many years being caged for regular bile extraction on a farm in Soc Son, Hanoi. However, in her new home, she has learned to use other senses to find her way around and enjoy the new life. Zebedee is another story. He was rescued in November 2009 after 13 years being caged since he was a cub. The terrible diet ruined his teeth and on the first health check, 12 of them had been removed. On the operation to cut Zebedee’s damaged gallbladder, the team even found a toothpick in his abdomen. 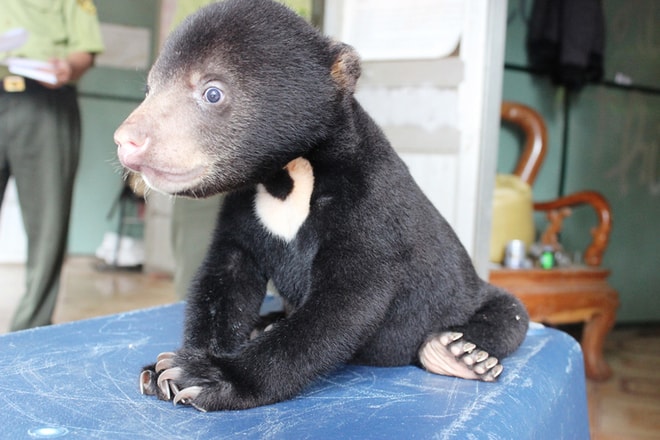 This is little Murphy (Picture was taken in 2015). They killed his mother to traffick him when Murphy was only 6 weeks old.

We were so happy to see our little Murphy. Murphy was discovered being trafficked in the mountainous province of Son La which borders both Laos and China. The trafficker said that he had killed Murphy’s mother to kidnap the cub. Because sun bear cubs usually stay with their mothers until they’re around 2 years old, so to be separated from his mother at just 6 weeks old was a tragedy for poor Murphy as well as other bear cubs in the centre. When he arrived, Murphy was the youngest bear the team would ever raise. No one could believe he’d be able to get over the trauma of being taken from his mother at such an early age. But brave Murphy had written his magical story. Under the special care of the centre’s team, he is growing up to be a naughty boy and living happily with his best friend, Goldie, in the enclosure. But not every bear is as lucky as Murphy. There are still nearly a thousand bears in cages in Vietnam facing regular bile extractions for use in traditional medicine. 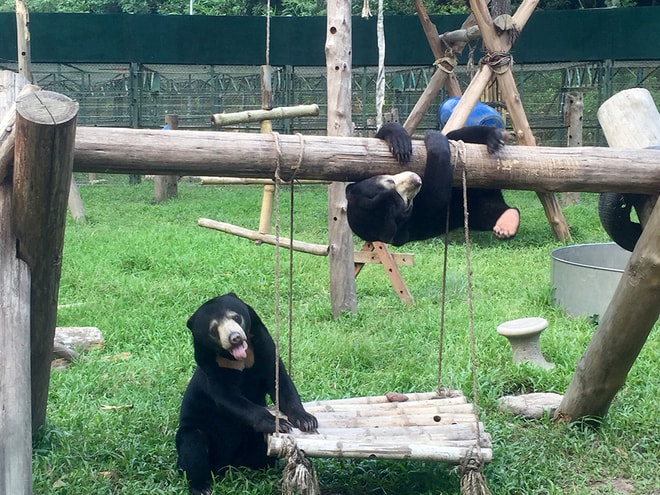 But now, Murphy (hanging on the pile) is a happy and playful bear. He spends most of his time to play with Goldie, his best friend.

During our stroll, we stopped at a small shed for a rest. There were many jars and pictures framed by bike’s tires hanging on the shed. Each jar contained a number of objects looked like white gravels. Hang explained that were the rotten and broken teeth of the rescued bears which had been removed to protect other teeth. 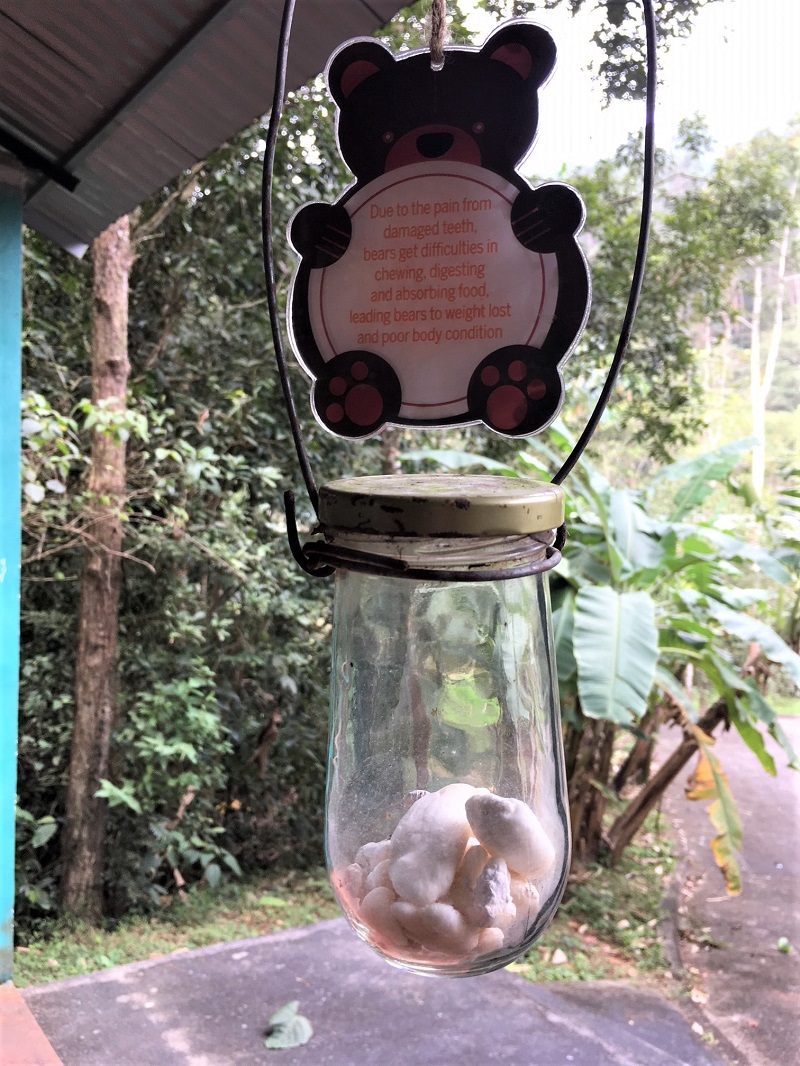 A jar with bear’s teeth. Rescued bears often have rotten and broken teeth from bar biting and inappropriate food.

We had tears in our heart when Hang told us the diseases that the bears faced with after years of being confined in iron cages. There were pictures of painful, cracked and rotting feet of bears who never felt the grass under their feet. Other pictures were of gallstones found in the bladders. Another showed a large abscess which removed from the bear’s abdomen. This painful story was about Rasberry- one of the 19 bears rescued from a farm in Binh Duong. In the health check, the pus mixed with blood came from the diseased gallbladder and veterinarian found a broken needle in his gallbladder latter. Poor Rasberry was not as lucky as his 18 fellows. He died 3 days after as a result of the massive infection of his abdomen. 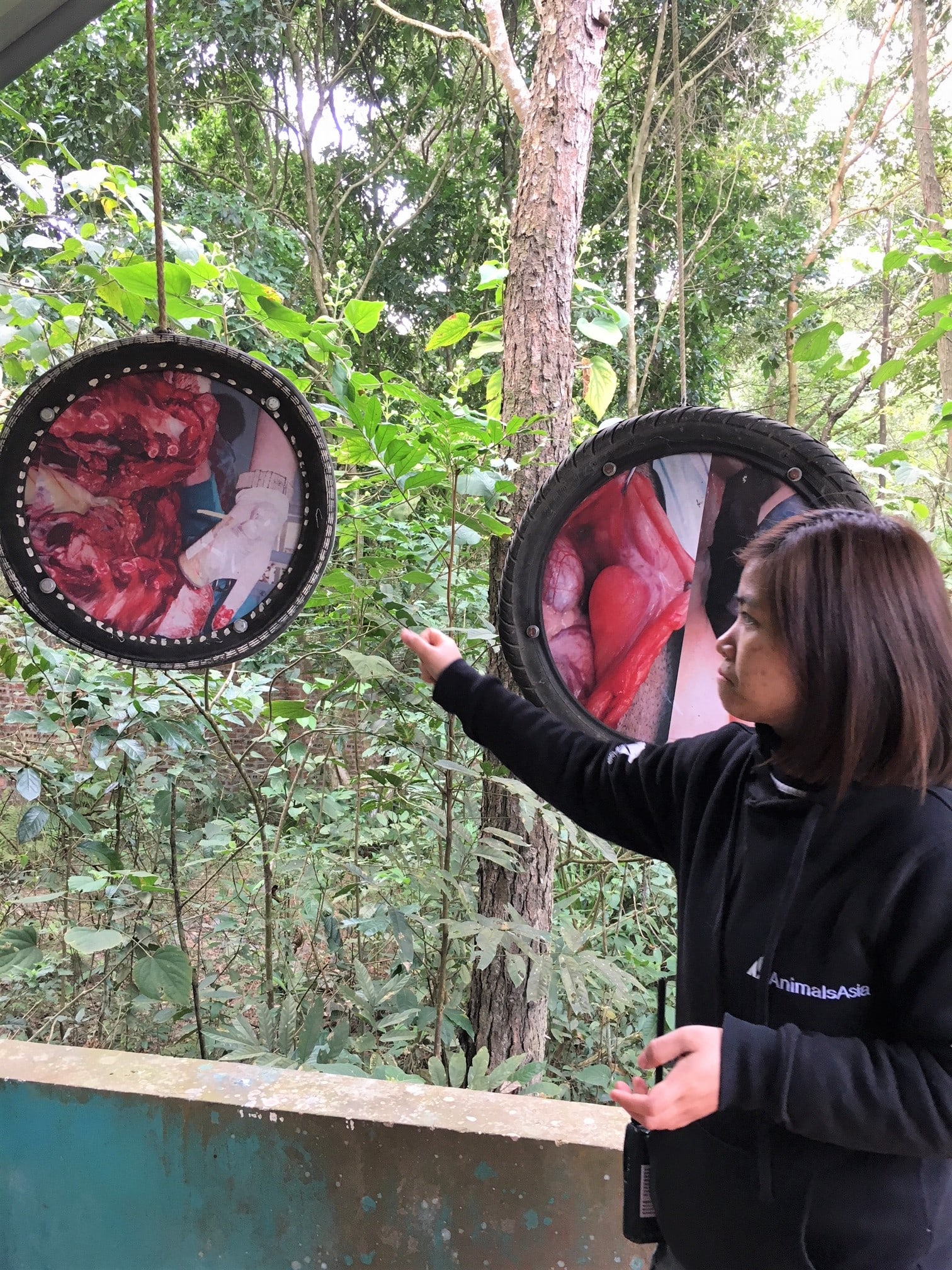 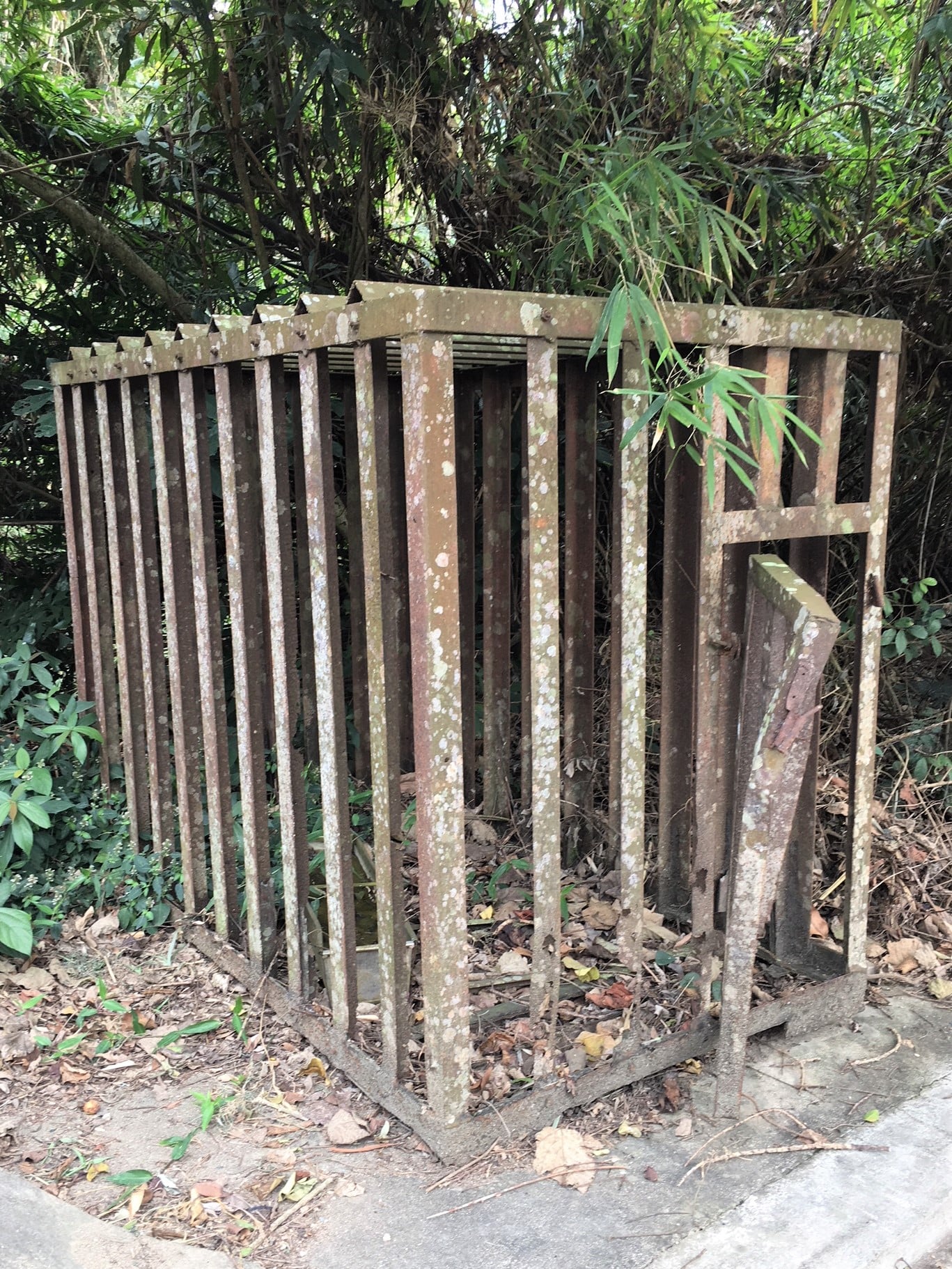 This small cage kept two adult bears, Bella and Gemma, for over six years on a bile farm in Ha Nam district.

After 3 hours visiting the bears, we said goodbye to Hang and other members of the Bear Rescue Centre. On the way back home, we wondered if all the people who were using bear’s bile know these facts? That even the bears got a tumour and when they drank the bile, they could also absorb the bear’s pus and blood. Did the bear’s bile cure human’s sickness (if it really did as the myth) or people were putting themselves at risk? Sadly that, this blind faith still exists. It puts hundreds of innocent bears into bad treatment, deprives their wildlife, and even takes their chance to live.

Good news for wild animal lovers: the Vietnamese government has compromised to end the bear farming and housing in 2023. But it’s still a long way from now to 2023 and has a lot of things to do. So if you feel touched and compassionate, don’t just stop with compassion. Turn it into action. You can help the Vietnam Bear Rescue Centre by sponsoring a bear, holding a fundraiser or just simply spreading the word about the team’s work.