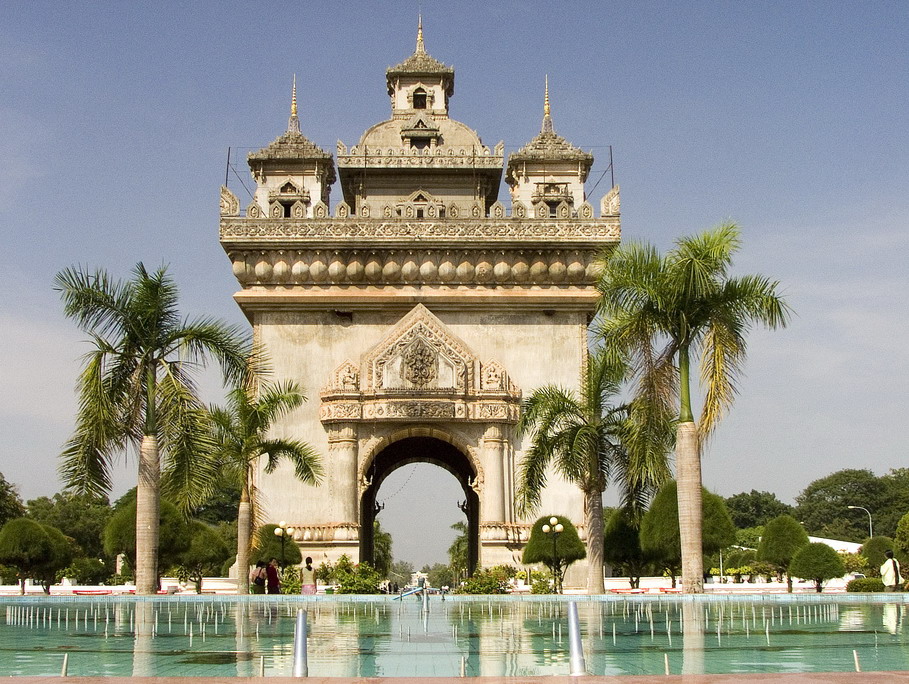 It is undoubted that the former royal city of Luang Prabang is the most famous and alluring destinations in Laos. However, more than 300 kilometres to the South, the current capital city, Vientiane also has its own charms, with a legacy left by the French, a laid-back atmosphere and lots of chic restaurants and cafes. We certainly cannot help mentioning some of the most famous and iconic landmarks in Laos, which are located in and around the capital. And here are 4 iconic landmarks of Vientiane:

Wat Si Saket was built in 1818. This Buddhist temple is a perfect example of the relationship between Laos and Thailand. The design concept of Wat Si Saket is in Siamese rather than Laotian Buddhist architecture style. Because of this, the whole complex did survive when the armies of the neighbouring Siam sacked Vientiane in 1827 as they used it as headquarter and lodging place. Today, Wat Si Saket remains as the oldest undamaged temple in Vientiane. 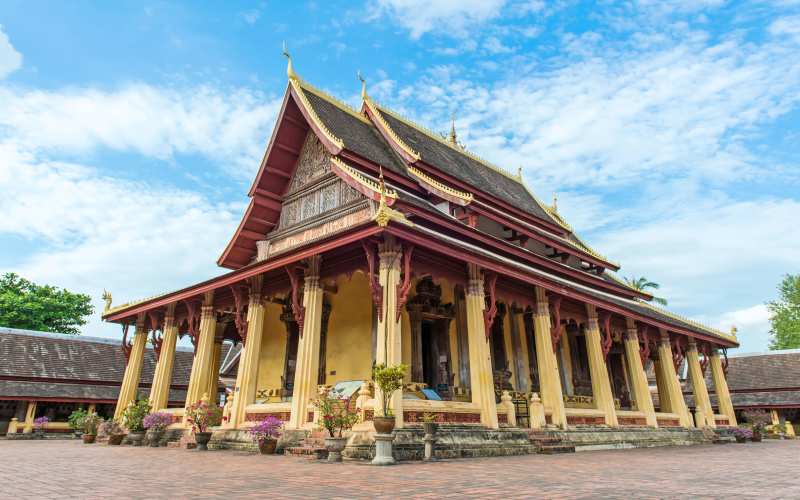 Although it is not a wat (temple), the Buddha Park is still referred as Wat Xieng Khuan (Xieng Khuan means Spirit City) by Lao people. Situated at the eastern outskirts of Vientiane, this public sculpture park features over 200 Hindu and Buddhist statues, including the enormous reclining Buddha which is 120 meters long. Despite having an ancient look, the park was only built in 1958 by a priest named Luang Pu (Venerable Grandfather) Bunleua Sulilat. 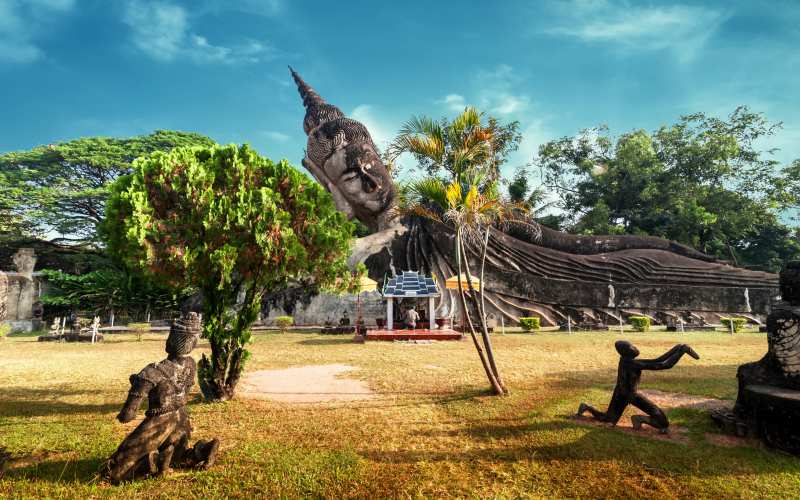 An overview of Buddha Park

Patuxai is built in 1957 and completed in 1968 when Laos was still under a constitutional monarchy. This seven-storey war monument was dedicated to the Laotian soldiers who sacrifice their lives for the country’s independence. The French often dubs Patuxai as Arc de Triomphe of Vientiane because it resembles the famous arch in Paris and both are located in a major intersection at the heart of the city. However, Patuxai is a typical display of Laotian architecture, with depictions of Vishnu, Brahma and Indra or decorations of mythological creatures such as the kinnari (half-female, half-bird). From Patuxai, you can have a fantastic view of Vientiane. 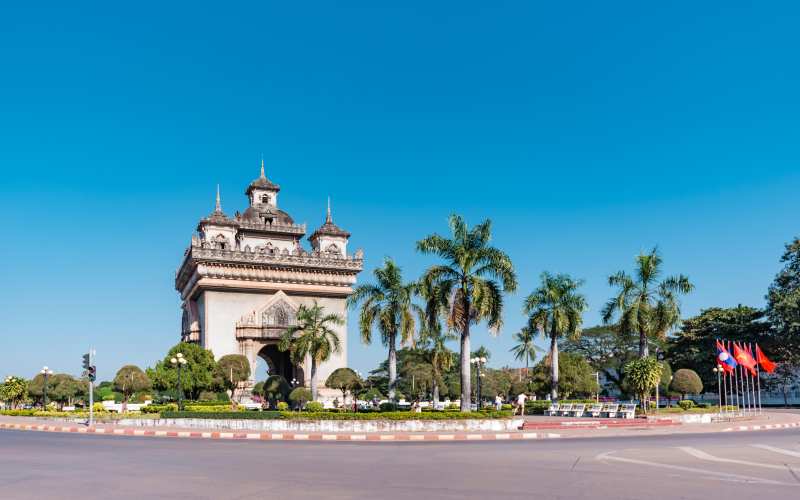 Patuxai is one of the most visited tourist attractions in Laos

Pha That Luang (The Great Stupa) is one of the oldest and most magnificent landmarks in Laos. The stupa is 44 meters tall, divided into three levels, each conveying a part of Buddhist doctrine. The encircling walls also feature several Lao and Khmer sculptures including King Jayavarman VII. Since its establishment in the 3rd century, Pha That Luang has undergone numerous restorations. However, this magnificent gold-covered stupa today is still an iconic landmark of the country, a national symbol, just like Angkor Wat in Cambodia or Shwedagon Pagoda in Myanmar. Pha That Luang can be easily visible from many parts of the city, even at night. If you want to make yourself some beautiful postcards of Laos at the end of your trip, Pha That Luang is something you cannot leave out. 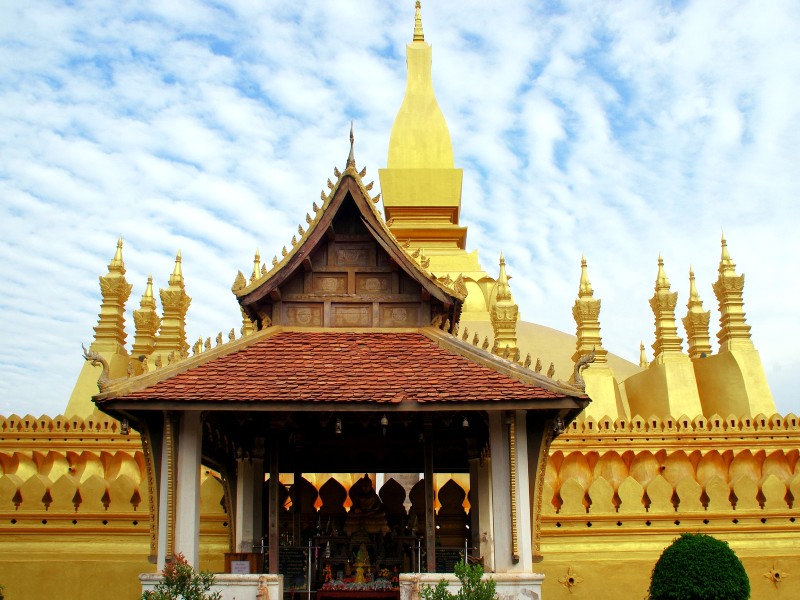 An overview of Pha That Luang, widely considered as the symbol of Vientiane (Image by DEZALB from Pixabay)

With our own office in Laos and over 10 years of providing luxury travel service, Exotic Voyages offers customizable trips to Laos’ grandest temples and exotic hill tribes.