15 Dec, 2016 | Travel Experience
From the ultimate guides of each destination, secret beauties, amazing things about food and culture to top suggested resorts and hotels, our travel blog is meant to help you travel Asia at ease and experience the best moments there without any hesitation.

The slogan of the resort "Ba Na - the road to heavenly scenery" really is not exaggerated because anyone who set foot on Ba Na hill is surprised at the beauty of majestic mountains and the fresh air. Located in 25 km of Da Nang city to the southwest, Ba Na lays on the Truong Son mountain range at an altitude 1487 m above the sea level (Hoa Ninh Commune, Hoa Vang, Da Nang). It has a year-round climate with an average temperature of 17 degrees- 20 degrees. 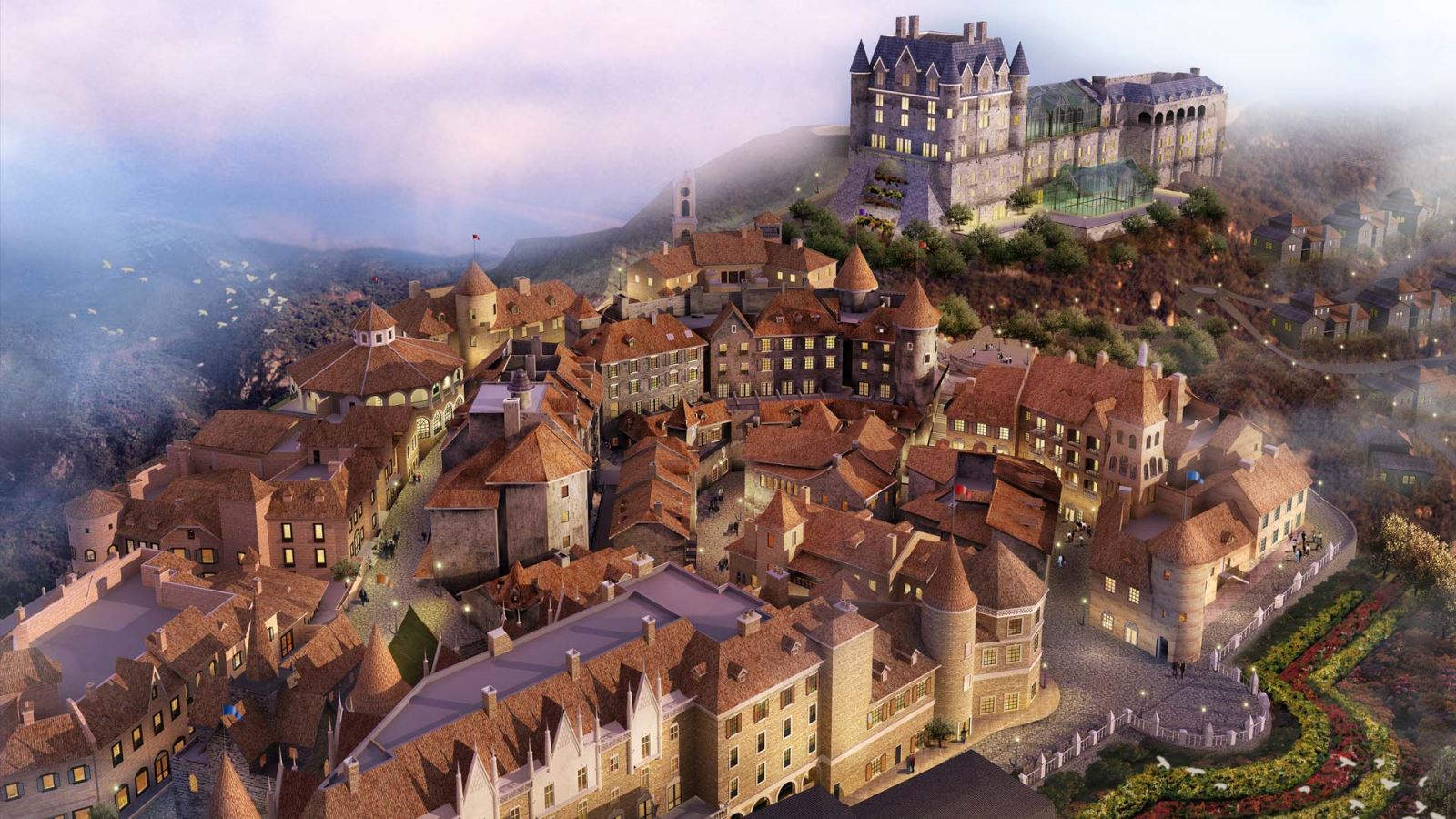 Ba Na's unique point compared to other tourist destinations is that a day in Ba Na has four distinct seasons: spring morning, summer noon, autumn afternoon, and winter night. If Da Lat can make visitors annoyed at hot noon and cold night, the climate of Ba Na is comfortable. In Ba Na, the four seasons appear on a day. This place has early sun and afternoon rain. On a day, the weather changes every hour, every minute. In the morning, it has dew while in the afternoon it is sunny like in spring with flowers blooming. At the sunset, the sky looks like in autumn. When you see leaves falling and clouds covering space, it is at night.

Ba Na was discovered in January 4/1901 by the French when Paul Doumer, Governor-General of French Indochina, was ordered to look for a cool climate to build sanatoria for French in Annam. After 1930, dozens of holiday cottages were built and became an ideal resort for officials working for French colonists. Then Ba Na quickly became one of the most famous and biggest resort Indochina attracting many visitors along with Le Bockor (Cambodia), Cap Saint Jacques ( Vung Tau), Tam Dao, and Sapa.

There are three explanations for the name of Ba Na. Firstly, because this place used to have Ba Na people living. Secondly, the word “Na” means fields. In the past, this place had three sides, so it was called Ba Na. Thirdly, when the French went to survey, this area had a lot of banana trees. And in French and English, this tree was translated into “Bananas". It was called Ba Na for short.

Previously, to reach the top of Ba Na tourists had to pass 16km with dangerous twisty corners. However, now it only takes 20 minutes by a secure cable. Ba Na cable car system with a total length of 5.042m consists of 22 pillars, 94 cabins and the capacity for 1,500 passengers/hour. This is a modern cable car system built based on European standards and recognized by Guinness World Records organization with two world records - the longest single-string cable car system and one of the world's biggest height gaps between departure and arrival stations (1.291m). 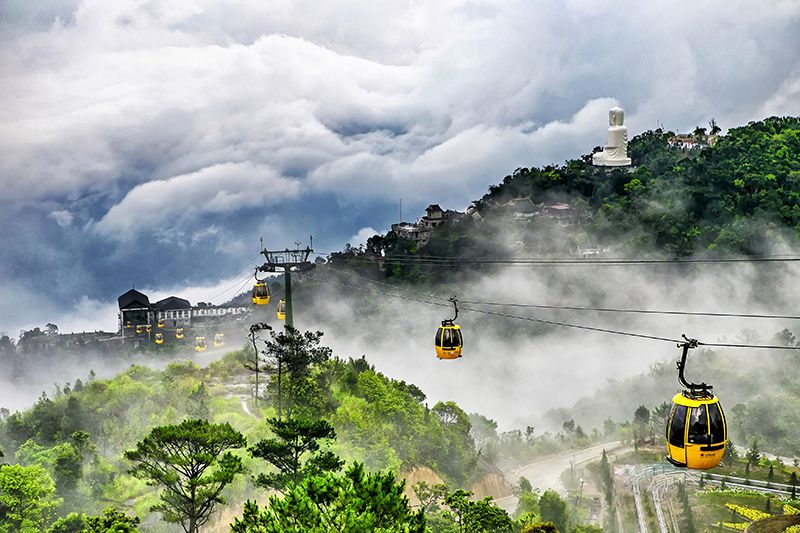 Sitting on a cable car, being suspended halfway clouds, and watching pristine and majestic forests, large trees, and flocks of butterflies, you'll feel adventurous and exciting like getting lost in the heavenly scenery.

Along with Golden Gate Bridge in San Francisco and Pont Alexandre III in Paris, the Golden Bridge in Ba Na is named in the list of the most stunning bridges around the world. Designed by a company called TA Landscape Architecture, this whimsical bridge looks like it's supported by two giant hands. Construction began in July 2017, it was completed in April 2018 and opened in June 2018. 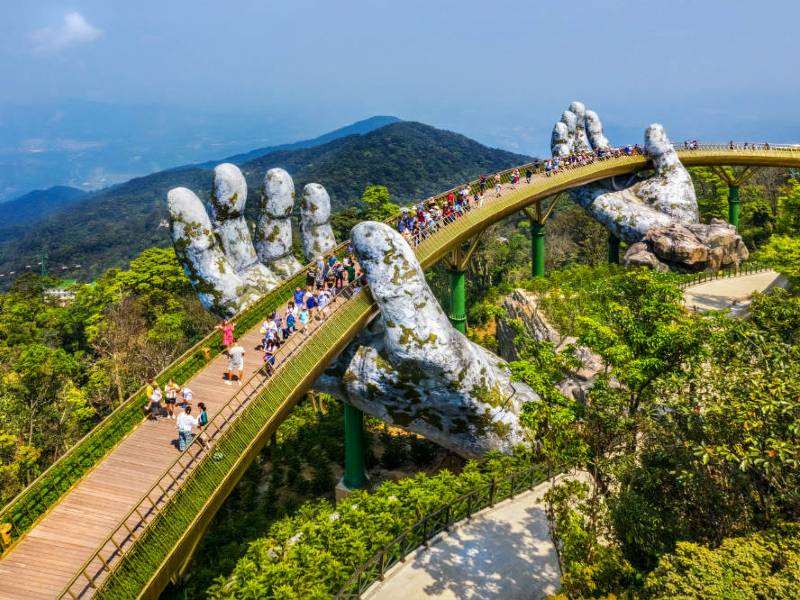 Visiting Ba Na, you should come to Linh Ung Pagoda which is a replica of Linh Ung Pagoda in Ngu Hanh Son. This pagoda has a Buddhist statue with a height of 30m. Apart from Linh Ung Pagoda, there is a place consisting of cellars of the French. They are still used to distill alcohol and are open to tourists. At the foot of Ba Na Mountain, there is Mo Stream attracting tourists to relax in hot summer and Toc Tien waterfall with 9 stories like a fairy's hair. Besides, Ba Na has rich flora and fauna systems. The great primeval forests are home to 256 species of animals including 61 species of mammals, 178 species of birds, and 17 species of reptile. The flora includes 543 species. Ba Na is also home to many species of rare animals such as Asian black bears and silver cheeked gibbons. In 1986, Ba Na has been recognized as a nature reserve to protect the rainforest and many rare animals and plants. Let's spend the night at Ba Na to see the magic of nature. On top of Ba Na Mountain, visitors can admire Da Nang brilliant in the light while mountains now hide now appear in the clouds. Presently, Ba Na has become the pride of Vietnam people in general and Da Nang in particular. Go Ba Na to experience the beauty of nature, to forget fatigues daily life, and to enjoy the magical moments with sun, wind, flowers, and trees. 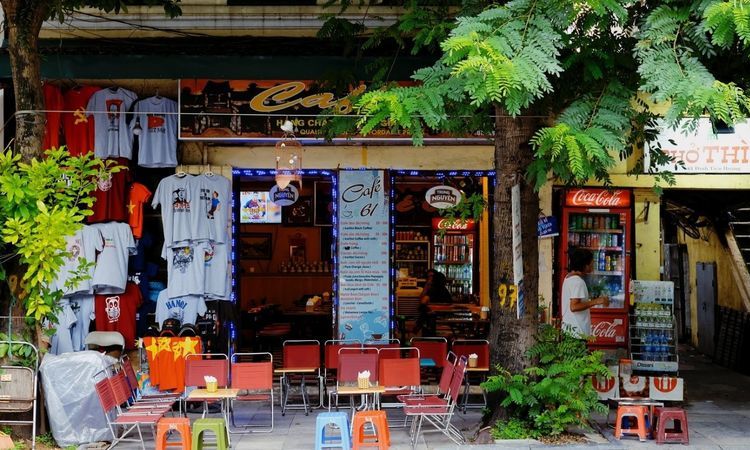 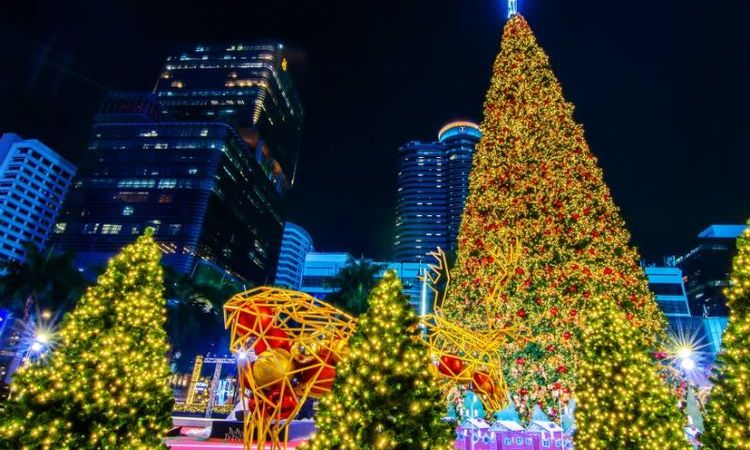 23 Dec, 2019
From the ultimate guides of each destination, secret beauties, amazing things about food and culture to top suggested resorts and hotels, our travel blog is meant to help you travel Asia at ease and ...
x Close