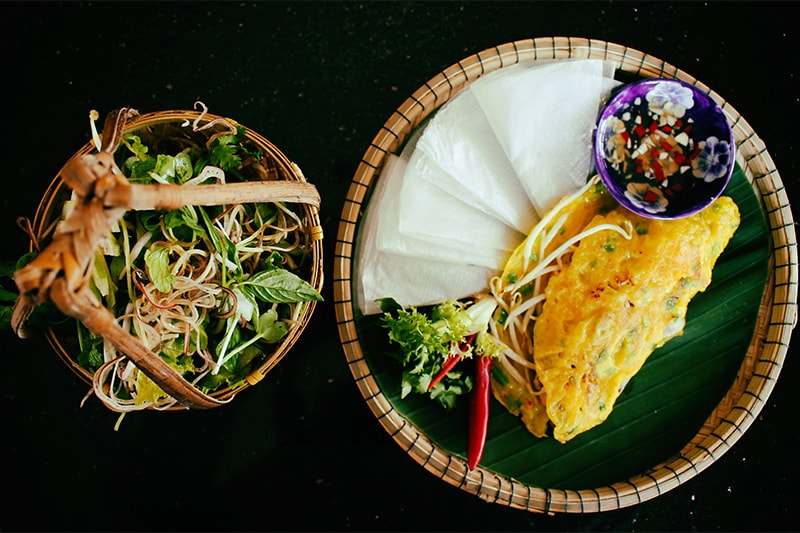 “Going to Vietnam the first time was life-changing for sure; maybe because it was all so new and different to my life before and the world I grew up in. The food, culture, landscape and smell; they’re all inseparable. It just seemed like another planet; a delicious one that sort of sucked me in and never let go.” - Anthony Bourdain, 2014.

Anthony Bourdain was a world-renowned chef, a seasoned traveler, author, and a fondly remembered people’s person. Mr. Bourdain’ great love and appreciation for Vietnam - his “first love” - is no longer a surprise, with him having produced several episodes for not one, but two television series featuring different places throughout the country; in and around major destinations such as Saigon, Hanoi and in Hue. The following blog is written in honor of the late Anthony Bourdain, aiming to retrace the culinary kings ‘foodsteps’ through his episode based in Saigon, named “Vietnam - There’s No Place Like Home”. During which, Mr. Bourdain is seen pondering whether or not he could make Vietnam his home, someday. “But with the sensory overload - a caffeine-like rush of heightened perception, one that always leads to good things” - Mr. Bourdain is heard saying as he navigates through an endless stream of traffic and across busy intersections on his way to his first ‘foodstep’ in Saigon. Vietnam Food Tours - Follow foodstep of Anthony Bourdain in Vietnam Part I and Part II

As Mr. Bourdain nears his first stop in the episode named ‘Vietnam - There’s No Place Like Home’, a loud sizzling hiss can already be heard street-side as he nears the kitchen of the restaurant. Banh Xeo (or sizzling pancakes/ crepes); the word ‘banh’ means ‘cake’ in English, and ‘xeo’ is the sizzling sound it makes when being fried in a pan! Mr. Bourdain describes the dish as being “a wonderful mutation of the classic” (referring to the French crepe). Banh Xeo is composed of a savory white pancake made from a mix of water, turmeric powder and rice flour, and can sometimes be combined with coconut milk, too. Once the pancake is fried to a crisp in a pan, thrown on top are chunks of pork, juicy little shrimps, saffron, mung beans and fresh bean sprouts. “All of the senses are engaged here”, Mr. Bourdain exclaims as he peers onto the table set before him, holding a broad array of coloured assortments. Banh Xeo is eaten in combination with a platter of fresh local herbs like lettuce, cinnamon basil, fish mint and fresh mint. Chunks of the sizzling pancake are torn off and wrapped up in the fresh herbs, and then bitten into. Common condiments eaten in pair with Banh Xeo include fish sauce, chili, and lemon juice. You won’t need to master the art of using chopsticks for this one, since the crunchy wraps are simply eaten by hand. 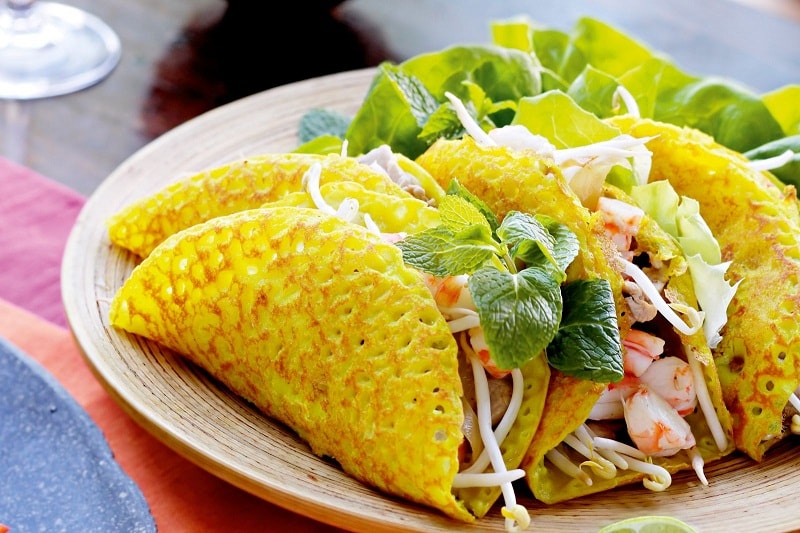 Banh Xeo - “a wonderful mutation of the classic”

Next up in Saigon, Bourdain heads to a place hailed as being the ‘snail street’ to meet up with his Vietnamese friend Ha, who introduces him to a selection of great, hearty snack foods to accompany a few cold beers. The first dish brought onto the table is fried buttered snails in a thick tamarind sauce, which gets wolfed down very quickly - “Yeah I could eat this like soup” Mr. Bourdain says with utmost seriousness. Chicken feet are one of the most popular late night snacks found across the nation, either boiled or barbequed. Mr. Bourdain is then seen chowing down eagerly on what he describes as being “America’s favorite flavor”, grilled chicken. He recognizes that while the ‘chewiness’ of chicken feet may be an acquired taste for those who haven’t grown up with it, it is something that can be quickly gotten used to. Freshwater crabs are quickly stir-fried by the head-chef, a 60 year old woman, then served up along with a set of crab crackers. Having been described as being “like, the ultimate beer drinking food” by Mr. Bourdain, he put on an even broader smile once having realized that he can also eat the shells! 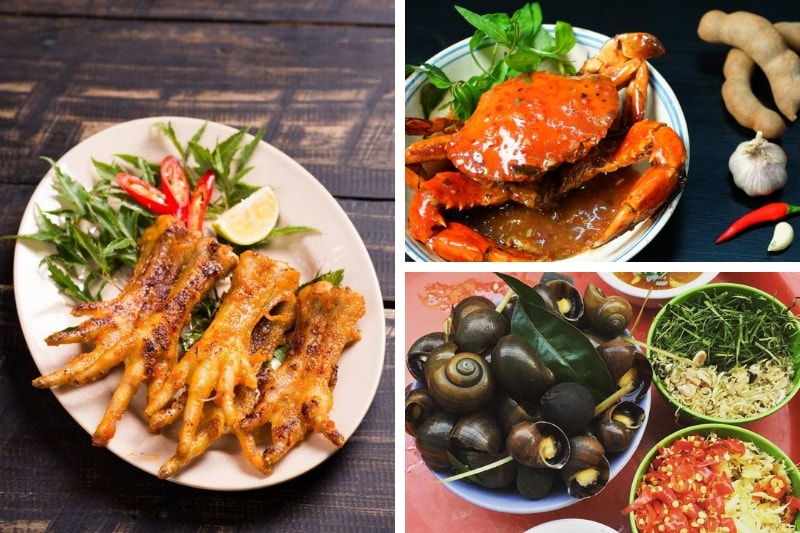 The paradise of amazing street food

As was noted by Anthony Bourdain himself “the first thing you notice is the sound of smashing crockery”. This establishment, Com Nieu Sai Gon, is run by a lady, Madame Ngoc, whom Mr. Bourdain has learned to love and respect over his many trips to Vietnam. Unfortunately, Madame Ngoc passed away after Mr. Bourdain’s first few trips to Vietnam, though, he continued to frequent her restaurant on numerous accounts following her passing. He says “Since my very first trip to Vietnam to make another TV show in 2000, I was hooked. Besotted by her landscapes, thrilled by the food, charmed - utterly enthralled by her people, particularly one special person; Madam Ngoc”. Madame Ngoc’s Com Nieu restaurant offers a huge variety of Vietnamese cuisine, however it is renowned for providing a uniquely traditional culinary experience in eating rice baked in clay pots, which are then smashed using a hammer, and thrown into the air across the room where a waiter catches the steaming rice, continues to flip it a few times before resting it into a bowl. Truly an unimaginable spectacle, so go and have a look for yourself! Once the clay pot rice is sitting still in it’s bowl, it gets cut into pieces, doused in fish sauce, oiled diced scallions and sesame. Yum! 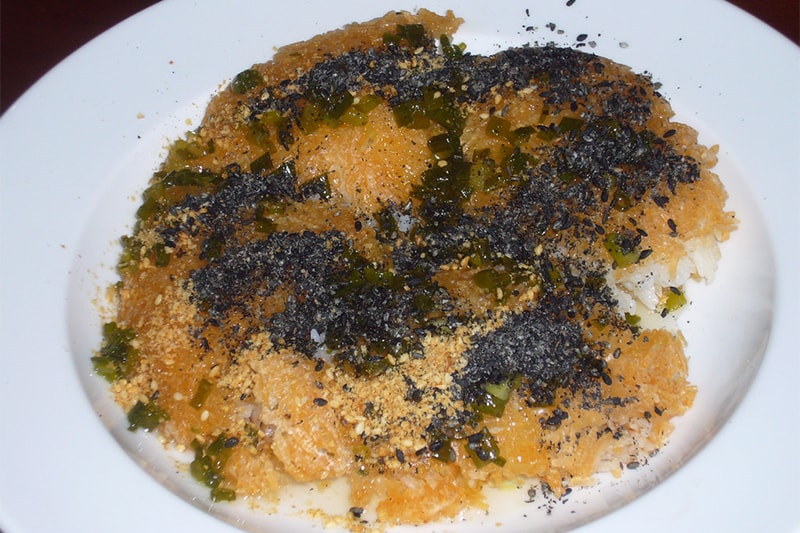 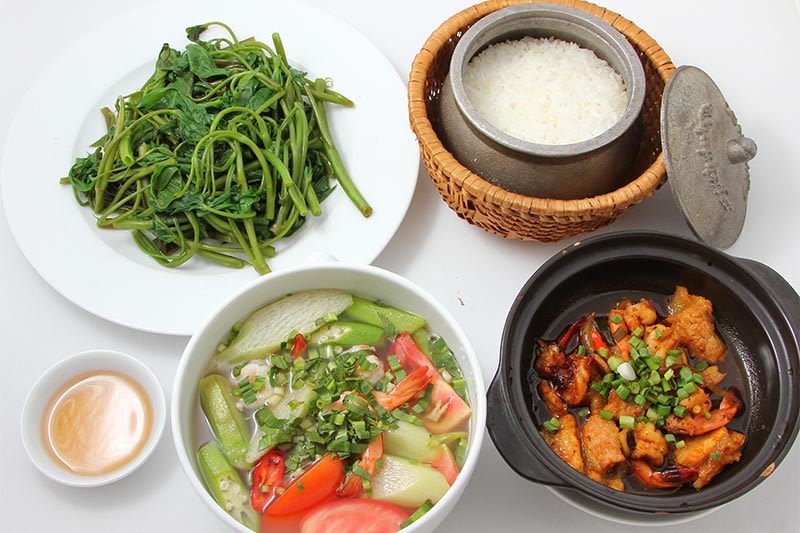 Traditionally, locals have it with other side dishes

Though Mr. Bourdain’s past visits to Saigon took an unfortunate turn for the worst, with the passing of his dear friend Madame Ngoc, he persistently continued his search for a new home in Vietnam. He admits that “the Vietnam I knew and loved has changed since last time I was here. With mom Gao’s passing, the center of gravity has shifted, there is an empty space”. Understandably saddened by his loss, Bourdain is seen sitting by the curb of a busy Saigonese intersection, observing and contemplating the bustling city swirl around him; “could I, would my family, be happy here?” he thinks to himself. As he sits, staring off at the distance, he is again reminded of the simplicity of life, through a mother teaching her baby daughter how to hang onto the handlebar of a bicycle, a young boy playing with a yo-yo, people eating everywhere, having drinks. It was at that moment during Anthony Bourdain’s visit to Saigon, where he realized that “the Vietnam I fell in love with, is still here”.