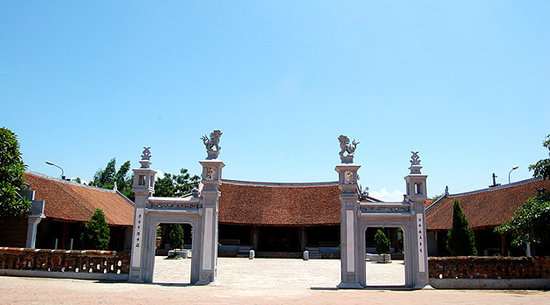 Mong Phu Village and the spirit of rural Vietnam

“The King’s authorities stop at the village’s wall”. The old saying so aptly describes the autonomous characteristic of Vietnamese villages in ancient time, as well as the power of their own rules over villagers’ life. Vietnamese villages were usually set within a line of green bamboo and surrounded by paddy fields, ponds and lakes. Each community was considered an extended family, where every member was connected to the others by familial ties and was expected to act according to the ascribed roles of their ranks. Personal pronouns in the Vietnamese language are also based on this idea of an extended family. The principle is like this: a middle age man can be called by a stranger with no blood ties as a brother, uncle, or grandpa depending on the degree of their age differences. His identity is thus defined by his age, in relation to the others.  “How old are you” is, therefore, one of the first questions Vietnamese folks ask each other when they meet. 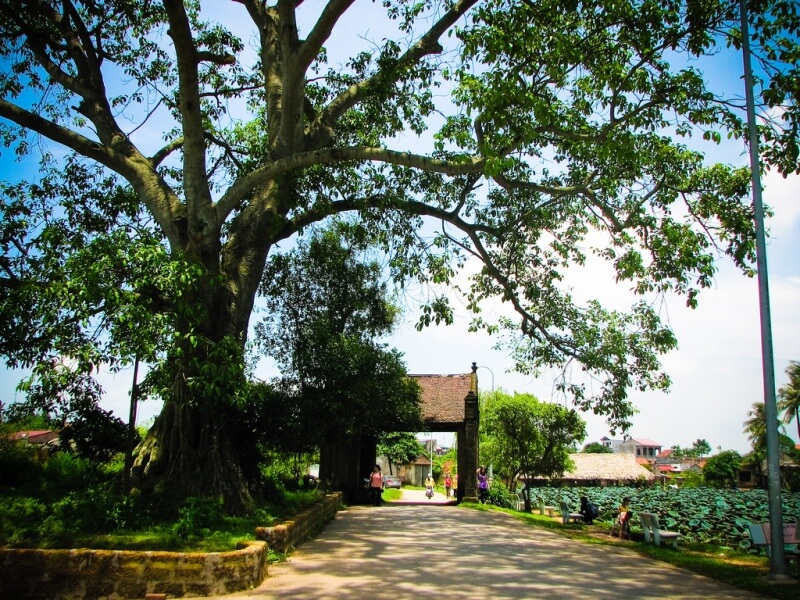 “Park your motorbike under the banyan tree, sit down and have some voi infusion, it will cool you down!” Grandmother Luong zealously invited us with her unique Duong Lam’s accent. Sitting on a bamboo bench, she was wearing the same black trousers and violet shirt that my late grandmother used to wear when she was still alive. On her head, a black scarf tied behind the neck gave her the typical look of all older country women. Her black teeth - a sign of feminine beauty in Vietnam before 1945, were still solid, despite her 80 years of age. “If you are looking for somebody, you can ask me, I know them all!”, She said while fanning us with her bamboo fan, “But first, you should go have a look at the dình, our dình is the best in the area!” I was pleasantly surprised. Mong Phu was much cleaner and tidier than in my memory. Yet many things must have remained the same, and not only the material part of it. After picking at the local white candy, stuffed with roasted sweetened peanuts with a light ginger aroma, which deliciously reminded me of our sweet snack between class hours back in my secondary school, we set off to visit the dình. In a typical Vietnamese village, no other building better reflects its social life than the dình. It is where the village’s protector genie is worshipped and where, in the past, village men above 18 would gather for important events. The village Council, consisting of dozen respected senior men would hold their meetings here to decide on important issues. Nowadays, those village Councils no longer exist; they have been replaced by government organized administration. However, in areas such as Mong Phu, where traditions have managed to retain some weight, senior men are still heard and respected to some degree via the channel of family ties and people’s inherited sense of hierarchical order. 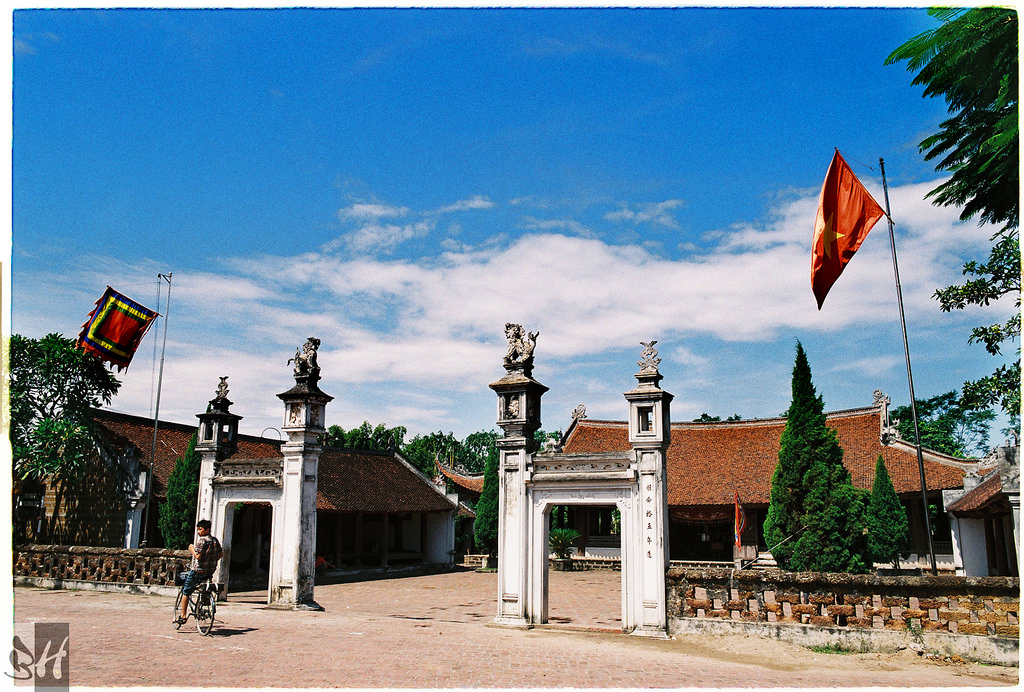 Mong Phu’s dình was a fine wooden structure with a curved tiled roof, the layout was in the shape of the letter U. Most of the main buildings hardwood floor, often used as dinning hall during village feasts, was elevated a foot above the ground, except for the central part where an altar dedicated to Tan Vien, their protector genie, is placed.  According to one of the most famous Vietnamese mythologies, Tan Vien is the god of nearby Bavi Mountain, who won the hands of the 18th Hung king’s princess by presenting gifts of extraordinary jungle animals. By so doing, he also defeated his rival Thuy Tinh, a rivers’ god of unmatched qualities but with equal passion for the magnificent princess. Every year, during the village’s festival, the whole village gathers to perform ceremonies showing respect and gratitude to their protector genie. It is also an occasion for the village to revive old traditions, and for the young generation to be reminded of the local history. As we were walking alongside the narrow paved alleys between the brick walls demarcating each family’s land, a voice reached us from behind: “Where are you going? Can you please tell me the time now?” It was a woman in her early seventies, dressed in a similar outfit that grandmother Luong would wear. “The sun is getting high; you will get sick if you don’t wear hats!” I was struck. This same sentence, I had heard it countless times when I was spending my school summer vacations at my grandmother's village. In my memories, my grandma would take me around the village and she would always mention that I needed to wear a hat. One of the reasons they have made Mong Phu a National Heritage is the relatively untouched state of its numerous ancient wooden houses, surrounded by walls of laterite bricks, which was found in the local soil. It may be necessary to note that such solidly built houses could only, in the past, belong to families of certain wealth or fame, which points to the fact that Mong Phu was once an affluent village, home to some remarkable scholars and statesmen. Today, although the village's glorious days are gone - as most of its inhabitants now depend on farming to earn their living,  there still survives a subtle sense of dignity and a certain attachment to old traditions. Mr. Nguyen Huyen, writer and editor of Van Nghe - a prestigious magazine on literature based in Hanoi, had his wife make tuong (traditional soy sauce) in big terra-cotta jars at the yard in front of their ancient house. “Tuong is the soul of our northerners’ life. Whenever I am away, it is tuong that I miss the most. And I'm not the only one, I assure you, it has even been written down in our folklore”. 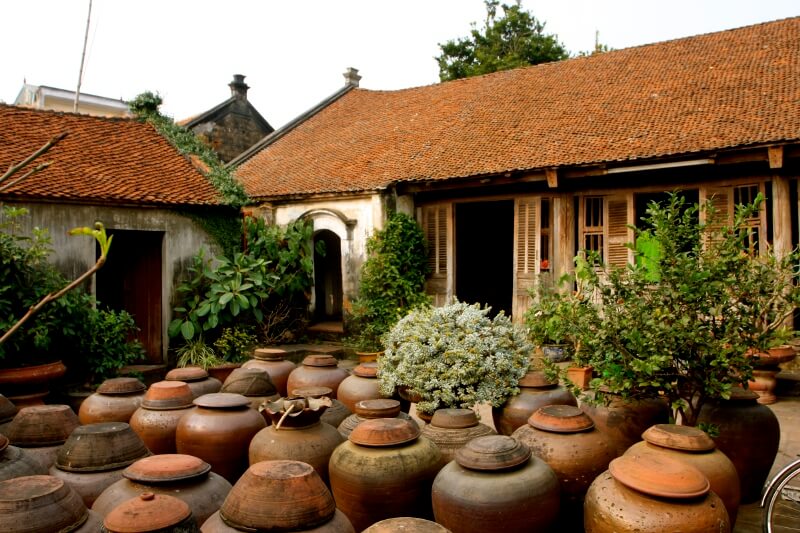 In Hanoi, up until around twenty years ago, tap water was not supplied to all families. In many neighborhoods, people had shared a communal water tank, showers, and latrines. Queuing for these basic needs could sometimes become a substitute for watching TV: informative, fun and full of camaraderie, and contentious at times when a wrong person would suddenly show up. This communal water tank culture is, however, not merely a product of the country’s post- Economic Reform period. The sharing of water sources dated back to immemorial time. In villages, while dình had been the males’ hang out, the common wells had been the females’ social interactions hub. Unlike the men, who would have all cultural excuses to spend the entire day discussing “philosophical matters” with their friends around some bottles of homemade rice alcohol, the women, usually busy with more immediate concerns, would have their fragmented conversations while doing their laundry or at the intervals between trips to take water home. Today, Mong Phu had several such wells and some are still in use, although many families now have their own. Passing the well and following the main street, we soon reached the green paddy fields that surrounded the village. Paddy had been replanted recently, so there were not so many people on the fields apart from a few who were passing the water from the canal into the fields using a cone-shaped bucket pulled out to the two sides by parallel strings. The water buffalos, on vacation after a hard working period ploughing the fields, were grazing the grass. A little further away, several green hills covered with eucalyptus trees added relief to the landscape. Wait a minute! Something seemed to be missing on this postcard-like image! Oh yes, the kids: they were supposed to be sitting on the buffalos, weren’t they? They were all in school, so I was told, even though it was summer and supposedly vacation time. Their grandparents and parents might have been content with keeping the old lifestyle, but they appeared to want their offspring to catch up with the modern world through education. Given the country’s present competitive educational environment, that means much hard work. The market place was just a short walk from the dình. Like in most Vietnamese local markets, the majority of the sellers were squatting, while others were standing behind their bicycles, loaded with one big basket on each side, containing tomatoes, spinach, morning-glories, bitter gourds, chilies, guavas, custard apples, jack fruits, and other Vietnamese staples. "A lot of jack fruit, enough to feed a small village”, I thought. The market was held daily, right in front of Chua Mia (Mia Pagoda). 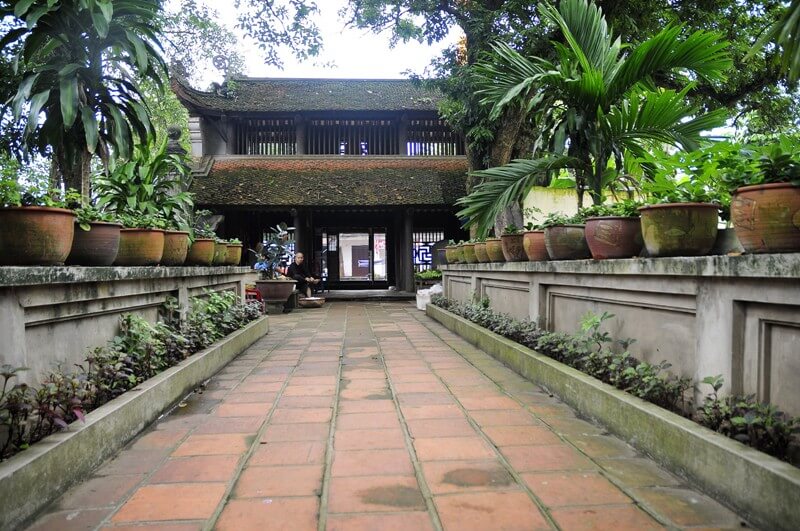 Chua and Dình are two aspects of the spiritual life of a traditional Vietnamese village. While dình is an answer to the social, immanent needs, Chua offers solutions on a wide range of “transcendental” matters, from astrological predictions to funeral rituals, from exorcizing to “salvation”. Chua Mia is a well-known pagoda, for a set of 287 old Buddhist statues made from jack-fruit wood of rare value, dating back to the 17th century. When we got there, the sun was almost overhead. A handful of devotees with bags full of offerings, incense and flowers were trying to get through the entrance which was being used by some market women to display their jackfruits for sale. “Proximity to the pagoda loosens one’s respect for the Buddha”, as goes the saying. Coming back to the village gate, an ancient work made from bricks and wood, I stopped by the lotus pond to admire the beauty of the pink flowers scattered here and there amid the green forest of its huge but graceful leaves. Grandma Luong didn’t know my Russian teacher; she must have not lived in Mong Phu but in a nearby village. It is also unlikely she was still teaching since the Russian language had become old-fashion. But I felt good, Vietnam is basically an agricultural country; almost every one of its inhabitants has a home village in his heart. Mong Phu was not a wonder. It was quaint, quiet and modest. No fancy houses, no masterpieces, no incredible master designed layout; everything was in normal size and normal pace. Yet, everyone could find in it something dear to his or her soul. Probably, this “normalcy” is the very essence of Mong Phu’s charm, as it represents so well, the spirit of rural Vietnam as it truly is, beneath layers of pretensions and projections. Simplicity is beautiful indeed!