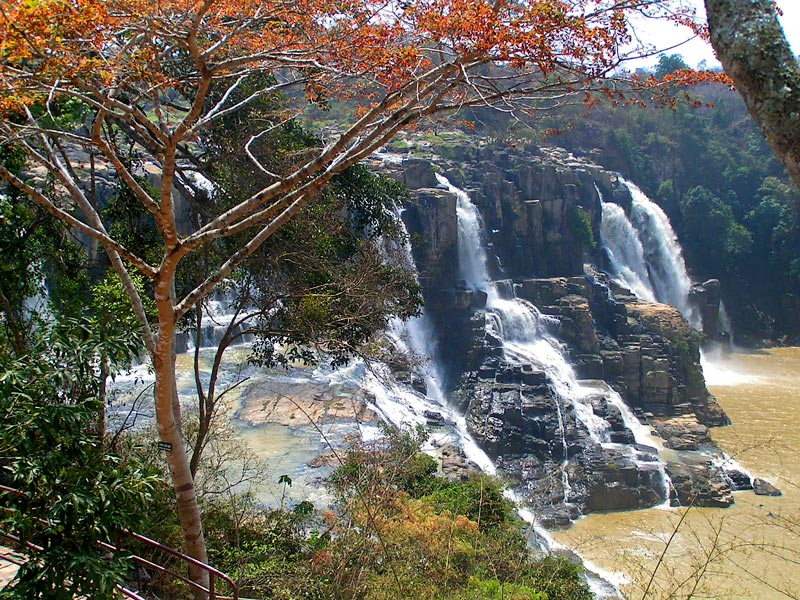 Falling down from stunning mountains at 40 meters height, spreading more than 100 meters of 7 rock levels, the Pongour Waterfall also known Seven Level waterfall is called “the most magnificent waterfall of Indochina” by the French. Located in a rugged landscape of the splendid mountainous area, 50 kilometres from the romantic city of Dalat, Pongour Waterfall welcomes us by exotic winding roads of lush trees and breathtaking backdrops. Once travelling here, “cosmopolitan souls” will be definitely bewitched by the surreal nature, amazed by hundreds of vivid wildflowers. The colours of flowers are much brighter, fresher on the backdrop of unspoiled natural beauty.  A kind of charming yellow flower totally covers poetic paths leading to the isolated waterfall.  Locals say merely about 10 years ago, people had to pass through dense forests or boating along the powerful Da Nhim, hanging on to a branch and swing themselves to the waterfalls. 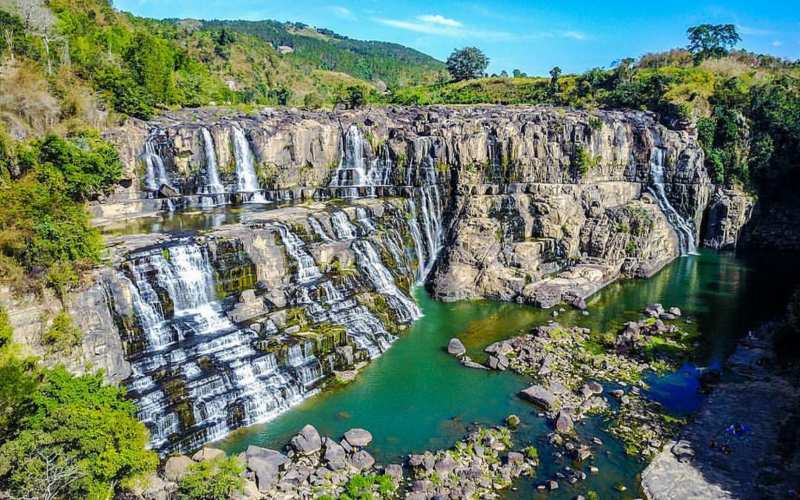 The primitive forest of Pongour officially opened for visitors in 1999. After nearly 15 years, the Pongour waterfall still keeps its own wild and magnificent beauty as the first-day visitors saw it. The waterfall stands arrogantly as if it is located at the end point of the earth, where the power and beauty of nature are hardly influenced by human beings. The magnificent waterfalls and eternal green of vegetations is a perfect backdrop for photo hunters. Here is the best view of the waterfall, where Bao Dai King, the last king of Vietnamese Dynasty usually stopped for enjoying beautiful landscapes. Travellers can also follow the rough steps down the foot of the powerful waterfall to see the extraordinary beauty from the lower view. 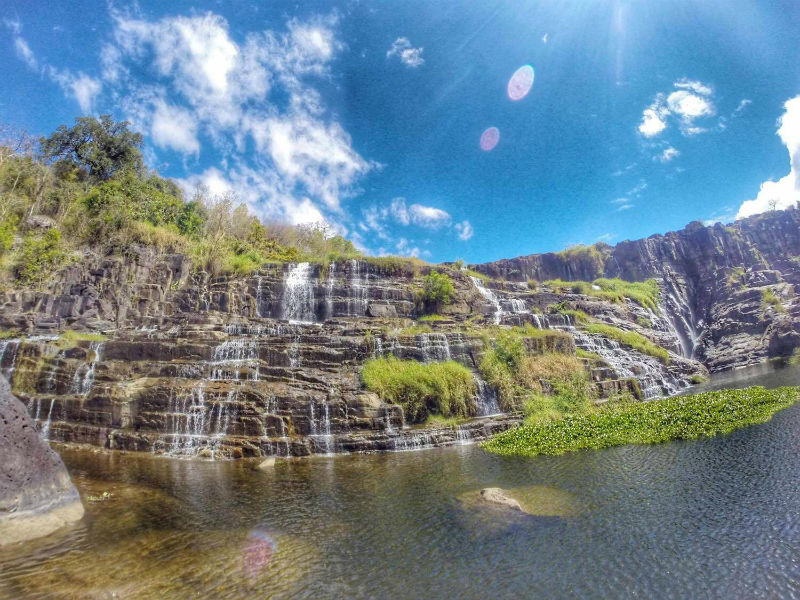 While the water is rapidly and strongly flowing, it is blocked by rolling rocks and stones, torn into dozens of streams stretching vertical cliffs. Layers and layers of waters pour down creating white foam and magical cool air. Travellers can feel the good smell of natural steam and the cool atmosphere from long distances. Between the two sides of rugged cliffs is a tranquil lake which contrasts to the powerful waterfalls. This is where people find the balance in their souls, the freedom in their spirits. Every stress and worry seems to be cooled off by the waters and relieved by the fairy landscape of Pongour waterfall. Pongour is the destination for those who are looking for a tranquil place to shelter after busy days and those who love to conquer the extraordinary nature. Note down Pongour into your bucket list when you travel to Vietnam as it is really worth your time and definitely satisfy your wanderlust.