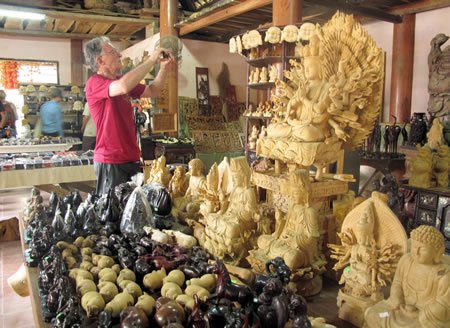 Come To Hoi An To Visit Kim Bong Carpentry Village

Together with Hoi An ancient town, Kim Bong carpentry is known far by workers who come to anywhere in Vietnam to build beam houses and old three section houses which are remained until now. Kim Bong carpentry village located on Cam Kim today, was built from the late 15th century. Tourists only take 10 minute to go from Hoi An ancient town to Kim Bong carpentry village, Cam Kim island commune. Step your foot on this land, you will heard chiseling, cutting and drilling resounded from the banks of Dong Tay. These sounds have become indispensable parts of local people's lives for generations attached to trees. 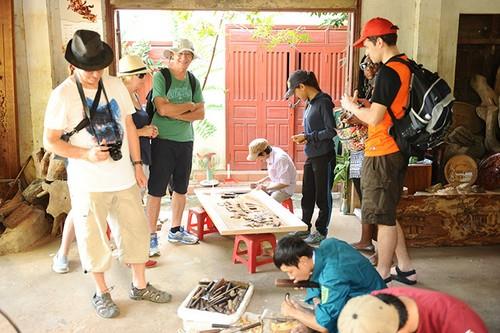 Kim Cam land situated on the right bank of Thu Bon river, ancient Hoi An was once a busy commercial port of the central. Thus, the traditional craft villages such as Thanh Ha pottery village and Kim Bong carpentry village had chances to thrive. Located on the river location convenient for transporting rafts, shipbuilding, and launching, Kim Bong carpentry village also offered its products on several merchant ships to countries around the world. Therefore, until now, the wooden products such as furniture, cabinetry, statues made by Kim Bong village are ordered by local and foreign businessmen. Kim Bong Dong is famous for shipbuilding while Kim Bong Tay is famous for woodcarving to produce outstanding products for decades, in which the old town of Hoi An is one of the proofs of a flourishing period as well as the talented genius of Kim Bong carpentry village craftsmen. 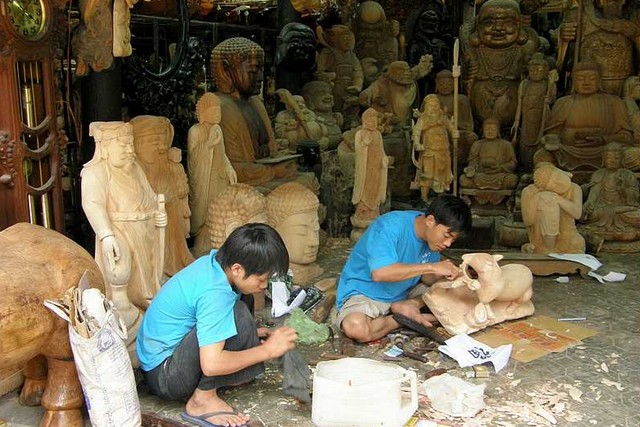 Thanks to the East-West acculturation, Kim Bong carpentry keeps its identities of individual glyphs. The rustic carpentry villages in the north are  affected by the feudal culture of the North and bring imprints of dynasties in history. Each vignette features like dragons carries the power and the authority of each period. While Kim Bong carpentry is  gentle, rustic but no less subtle. All are what you can feel from the ancient town of Hoi An as well as on other products. The floral motifs on each pillar are pictures of plant stems and leaves. With the same dragon image, at the hands of Kim Bong carpenters, carries a bamboo dragon image with its mouth soaking flowers and smiling gently. Pictures of farmers or Vietnam bamboo trees are shown on the carvings. All are rustic and close to the daily life of citizens. In addition to the ancient town of Hoi An, the marks of talented Kim Bong carpenters are also recognized through the historic Hue Citadel building. At that time, when the Nguyen Dynasties decided Hue as the capital and invited the carpenters from the southern area to building. Those carpenters came from Kim Bong carpentry and Van Ha, Quang Nam. Coming to Kim Bong carpentry village, visitors have the opportunity to visit a carpentry workshop to view and touch carpentry products made by talented craftsmen. The products of the village now have differences with other villages. They are only painted lightly to retain the natural wood color. 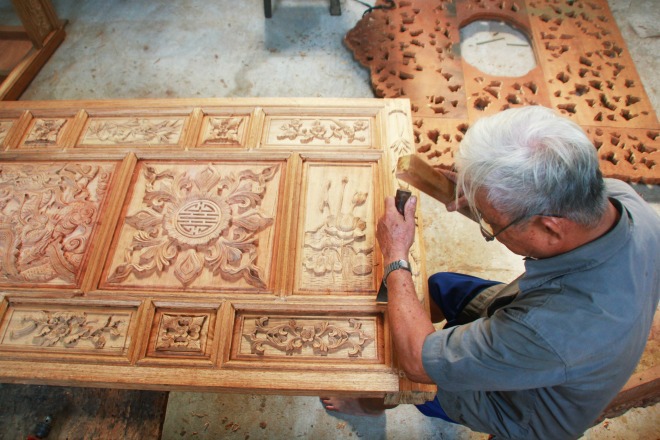