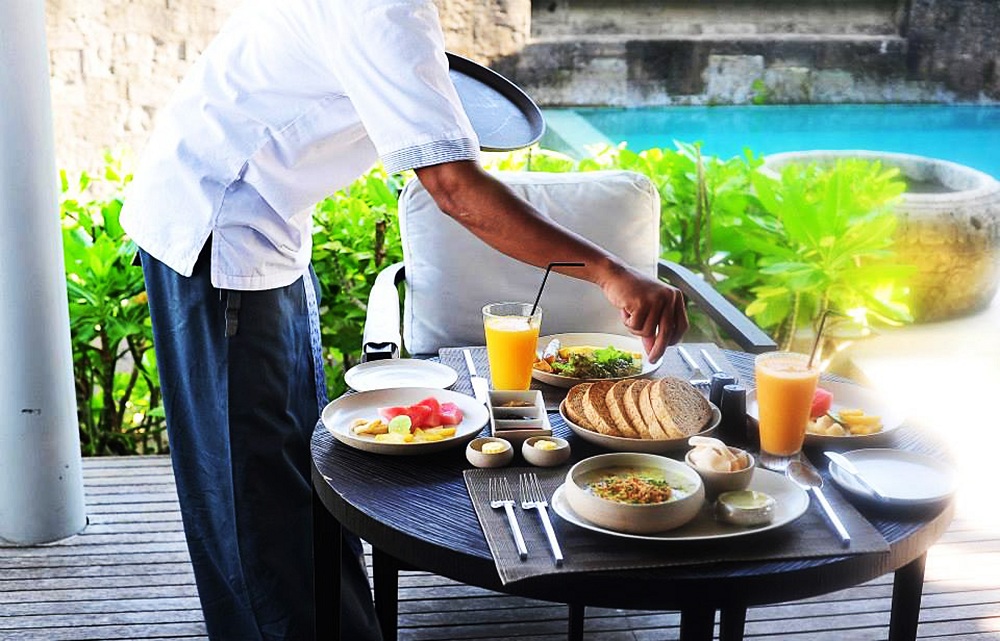 People around Asia welcome a new day in many different ways. And that includes how they have breakfasts. In this post, we will take a look at what people are having for breakfast in some Asian countries.

We start at one of the oldest civilizations in the world. And with an incredibly rich culture and history, breakfast in China varies quite a lot as well. However, the two most popular foods are dim sum and congee. Dim sum, which means “touch the heart”, is one of very few breakfast foods that have become available all over the world. Dumplings are the most popular form of it. They’re filled with meat, shrimp or tofu and vegetables. For sure, there are lots of things to choose from a dim sum breakfast, but if you’re limited of time, just go for a bowl of congee. This is essentially rice porridge with various toppings such as pickled vegetables, meat, chicken, beans or peanuts. For drinks, a cup of tea would suffice. 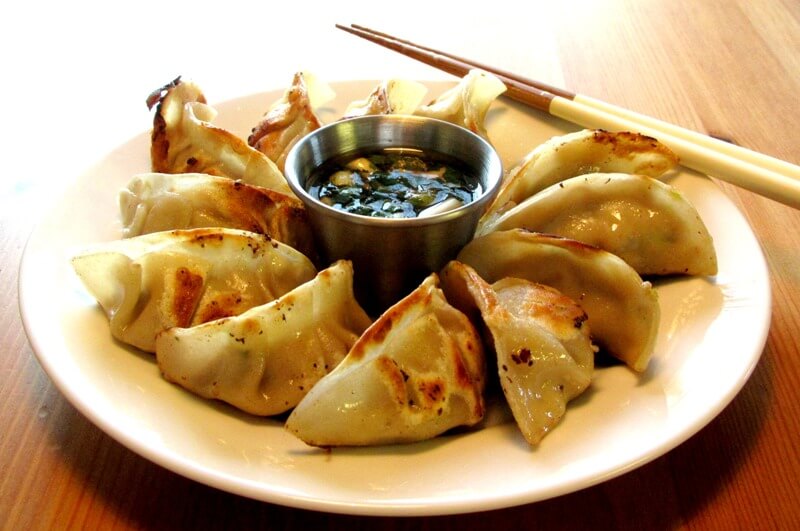 Dumpling must be one of the oldest breakfast foods in the world - source: pinterest

A traditional breakfast in Japan is simple but savory, just like the Japanese cuisine itself. It consists of steamed rice, miso soup (tofu, seaweed, sometimes with mushroom and chopped onions), and side dishes which can be rolled omelet, dried seaweed, broiled or grilled fish, pickles or fermented soy beans. 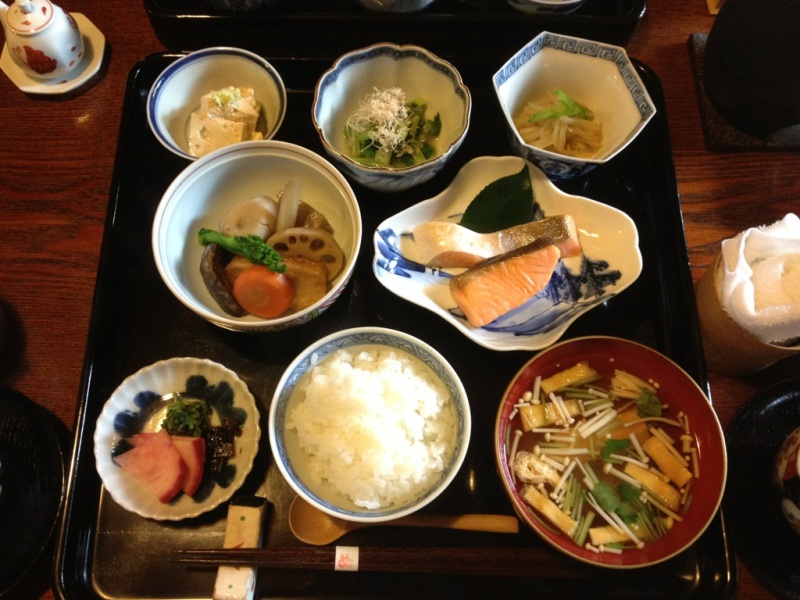 As many people may guess, pho is indeed the most popular choice for breakfast in Vietnam. The sweet flavor of simmering beef bones, star anise, cinnamon, onion and ginger in pho broth is missed whenever a Vietnamese travels abroad. However, there are many other great breakfast foods in other parts of the country. In Hue, it’s bun bo, a very spicy dish with thick and round vermicelli, beef, and quite a lot of lemongrass and chili in the reddish broth. And we cannot help mentioning banh mi, an adoption of French cuisine in Vietnam with a baguette filled with the selection of fried eggs or omelet, pate, fatty pork, pickled vegetables and some coriander. Travelers to Vietnam often dub that the best bite in the country can be found at Banh My Phuong, Hoi An. So if you have plan to discover the flavors of Vietnam, this place is a must.  The breakfast is finished with a cup of strong Vietnamese coffee with sweet condensed milk (ca phe sua da). 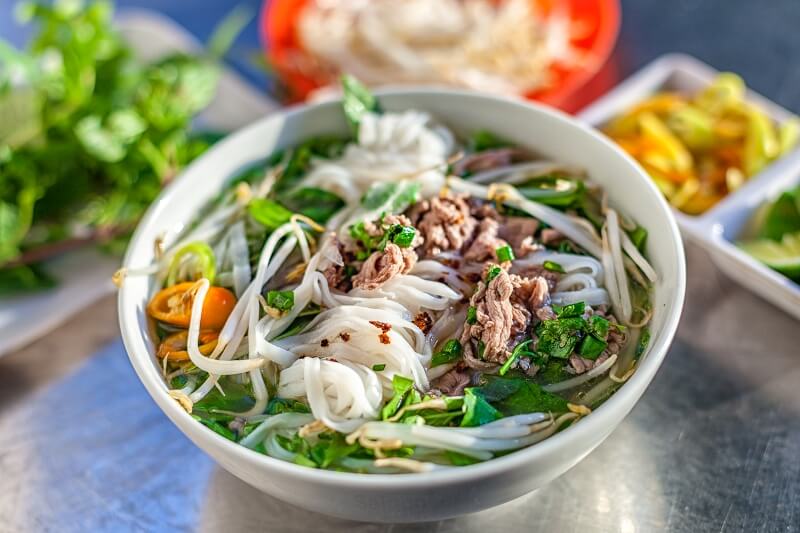 A bowl of pho or an iconic banh my, followed by a strong cup of ca phe nau da, that’s how Vietnamese people kick start their day - source: pinterest

Nom banh chok or Khmer noodles is the most typical food for breakfast in Cambodia. And it is a great example of how Cambodian cuisine is influenced by other famous cuisines in Asia. While the inclusion of rice noodles and herbs make some people confuse with pho, it is topped with fish-based green curry gravy. Like pho in Hanoi, nom banh chok is widely available on the streets of Phnom Penh and Siem Reap. 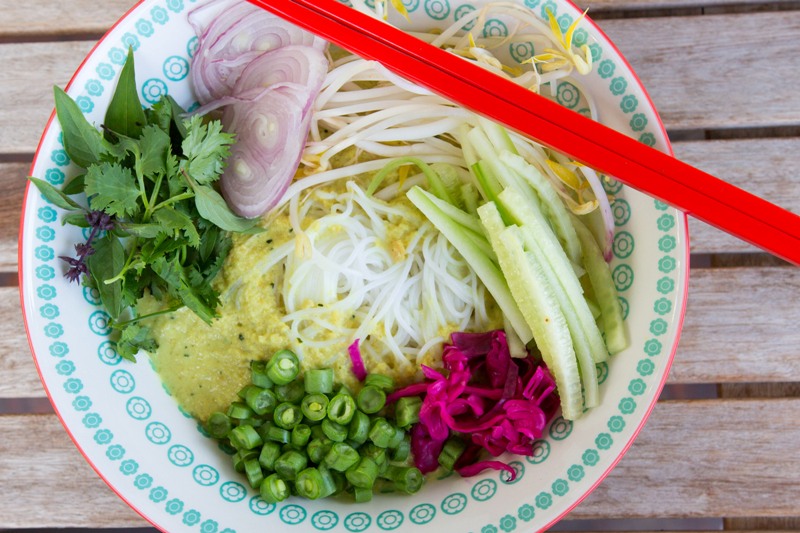 This is Cambodian Khmer Noodles, not pho! - source: pinterest

In Thailand, the variety of khao chao or morning food is not sumptuous like the Thai cuisine itself. This is because quite often, foods selected by the Thais for breakfast are also eaten as lunch and dinner. Single dishes are often sold on street stalls for breakfast but they’re also available at other times of the day. The most popular of which is chok, a Thai version of rice porridge. Chok is often eaten with cooked egg, minced pork or beef and chopped onions. 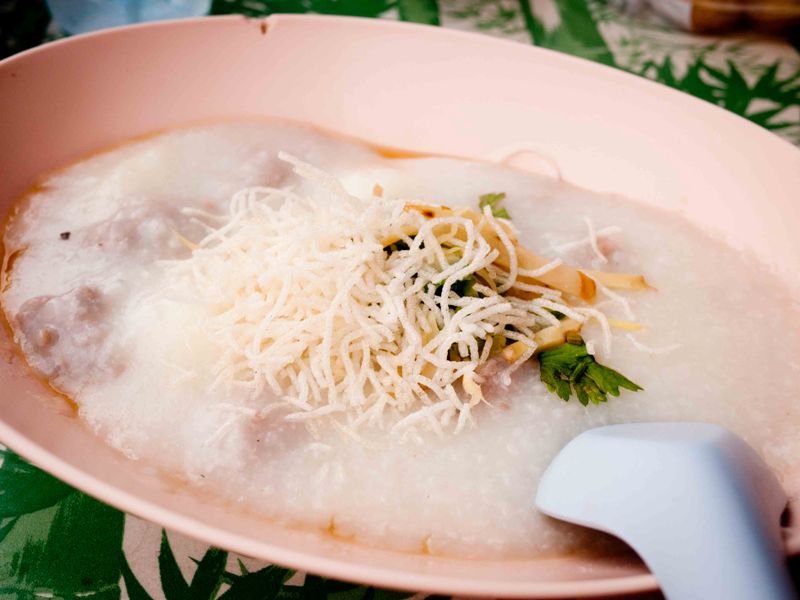 Chok, a simple but common way to start a day in Thailand - source: pinterest

Burmese people often start a day with mohinga, considered by many their national dish. It is served in every corner of Yangon and Mandalay, fancy restaurants or teahouses, even roadside stalls. Mohinga is based with catfish, fish sauce and fish paste, accompanied with garlic, onions, lemongrass, banana stem and crispy fried chickpeas and sometimes sliced boiled egg. Htamin jaw, a Chinese-inspired food which is basically fried rice and boiled peas is also often eaten as breakfast in Myanmar. You can experience the culinary culture of Myanmar like a local in our half day Burmese cuisine tour in Yangon. 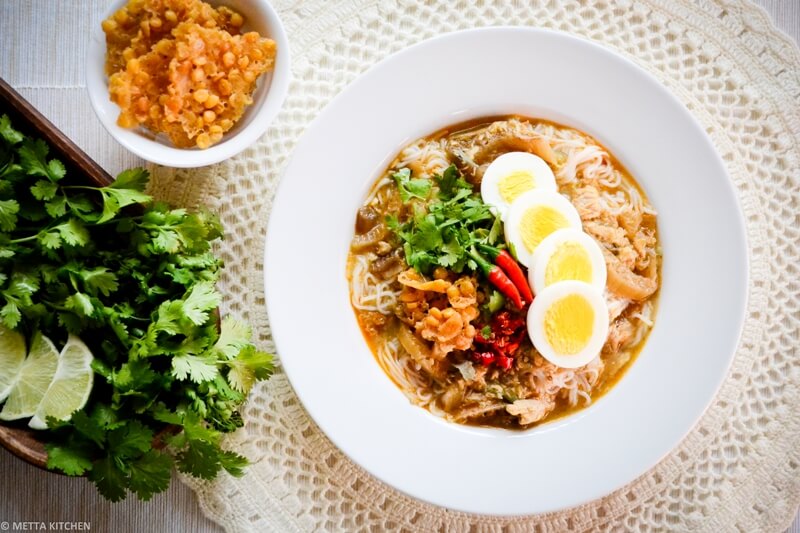